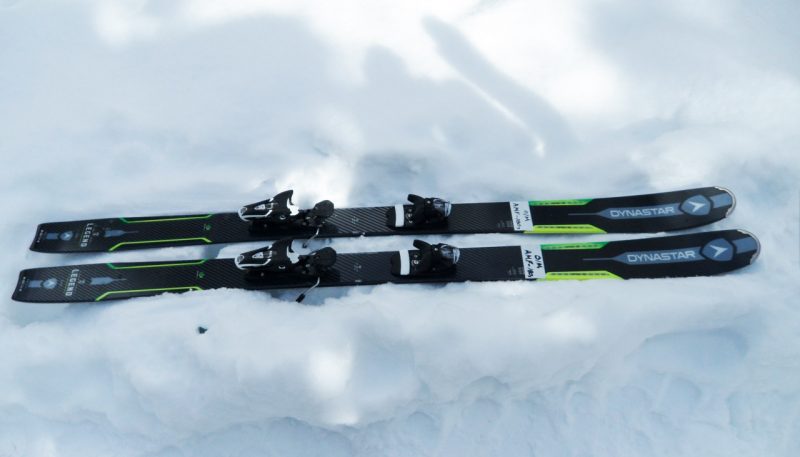 THE VERDICT
Dynastar continues to upgrade its Legend series, with a new generation of Powerdrive construction—with a progressive rocker profile and five-point sidecut—to provide better on-snow contact, Titanal laminates for power, tip and tail for ease of initiation and hook-free carving, and poplar core for great liveliness. Last year, the brand offered the Legend X84 for the Frontside category. This year, the Legend X88 provides even more all-terrain capability without sacrificing the ski’s great quickness and awesome edge grip. The ski also has a lighter feel and more energy than a lot of other boards in the Frontside Category. For many testers, the increased maneuverability and enhanced rocker can make the ski feel more active and alive in a slalom turn than it does in a GS.
FULL REVIEW

The new and improved Dynastar Legend X88 feels lighter, more playful, and much more versatile than many of the other skis in the Frontside Category. That’s thanks to Dynastar’s Powerdrive Free construction featuring five-point sidecut, which helps create a more progressive flex and a tight turn radius. That and a lightweight poplar woodcore are why testers said this ski was remarkably quick edge-to-edge, and could be easily steered in a variety of turn shapes. The ski’s best features include great turn variability, super edge hold, near top of the category responsiveness, and an ease of initiation, particularly on softer snow surfaces.

It’s not the dampest ski by any means, but it makes up for it in terms of turn shape variability and float. The combination of the five-point sidecut, slightly beefier construction, and wider waist than the brand offered for this category last season (sizing up from an 84mm to an 88mm waist) do result in a smoother, more dynamic feel on all snow conditions. As one tester wrote, “Seems like it would hold its own in a foot of fresh snow if you asked.”

The Legend X88 earned some high scores in the Overall classification, providing such a great mix of Stability, Edge-Hold, and response that our testers felt this could easily be a go-to ski for a wide variety of lift-served, Frontside skiers.

Building on the success of last year’s Legend line, Dynastar’s new Powerdrive Free construction—a combination of light, reactive poplar core with multi-layer sidewalls (including Visco for stability and ABS for dampening) the Legend X88 features one of the best examples of how a Frontside ski can offer sufficient Float without sacrificing Edge Hold. The ski has just enough tip and tail rocker to get you easily in and out of turns while still feeling like your edges aren’t losing contact. Add in the responsive feel of this ski, and you have the confidence to charge a lot conditions on or off-piste.

Last year, testers felt the X84 skied a little short, and lost Stability at higher speeds and in longer turns. Not so with the X88. Medium radius turns were one of the most thrilling in this category, and the ski was able to hold onto higher speeds with balance and confidence. Across the board, no tester graded the ski lower than an 8 in this classification, with many giving it a 9 or a 10 for how aggressive it felt underfoot.

The Edge Hold is also fantastic. The ski felt smooth, accurate, and always in the arc no matter what speed, or what turn shape. It’s a very exciting, authoritative ski, with the ability to quickly transition from long groomer turns, to a zipper line down some of Snowbird’s steep bumps, and keep on railing through the soft stuff. Tester comments in this classification include: “Great edge hold in medium radius turns,” “Hooks up and releases cleanly,” and, “Grips great whether you’re on-piste or off.”

The Carving Pleasure classification was a high point for the Dynastar Legend last year, and this season was no different, even with the wider waist width. In fact, we found that along with the ski’s ability to roll in and out of smooth, even flexing turns (thanks in large part to the Five Point Sidecut and tip and tail rocker) this ski was also more versatile in its ability to maintain a pure arc in hard snow and also in the soft stuff. The lowest Carving Pleasure score the ski got was an 8, with several 9s and one 10.

This was also a much-improved classification for the Legend Class. While last year’s X84 was a master of the short swing turn, especially on groomed snow, the Legend X88 can also transition easily into long turns at higher speeds, and was absolutely thrilling to ski in medium radius arc. Far and away this ski exhibited some of the best all around performance in the category at all speeds, all turns, and all snow conditions you might find on a typical day of lift-serve.