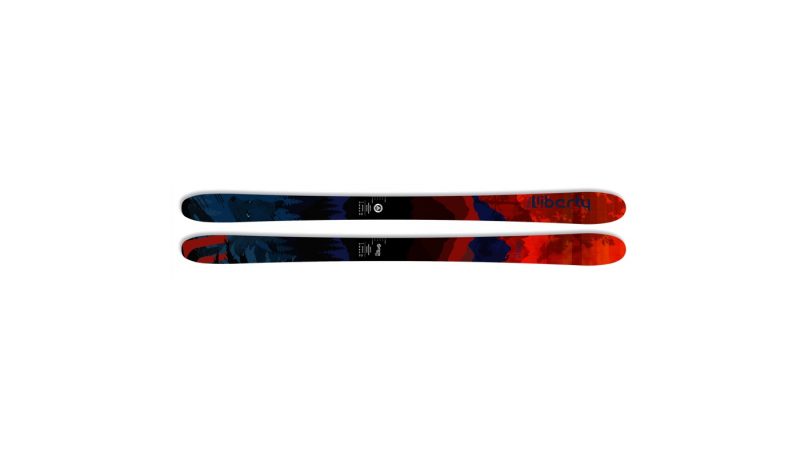 THE VERDICT
Liberty’s new Origin 90 delivers a forgiving flex and shape that is solid at all speeds and easy to initiate. The ski is best off-piste, where the mix of poplar and bamboo woodcore mixed with carbon fiber provides a great all-mountain performance for the kind of conditions the majority of West Coast and Rocky Mountain skiers can expect to find during a typical day on the lifts. It’s not a pure carver, in a Frontside Category that rewards how well a ski arcs on the hardpack. It also doesn’t crank out short swing turns like the Dynastar Legend, Elan 84XTi, or Fischer Pro MTN 86ti, preferring a patient, GS-style turn over a manic-y quickness edge-to-edge. The Origin 90 is a very fun ski for people who expect softer snow conditions in the Frontside experience.
FULL REVIEW

Liberty’s Origin 90 is the kind of ski a lot of steep hill skiers will appreciate. It prefers a nice medium radius turn especially in softer, more off-piste conditions,

features an even flex that makes it feel balanced underfoot, and is easy (once you pressure and steer the shovel) to initiate, even with fairly minimal rocker in the tip. The ski features a mix of poplar and bamboo core – thus the flex – mixed with carbon fibers for a solid feel in the steeps and bumps. It is one of the better mixed snow performers in the Frontside Category, which should increase its appeal to folks who ski Breckenridge, Mammoth, or Vermont’s Jay Peak.

Pure carvers are not going to be as excited, particularly because short turns and hard snow are not the Origin 90’s strong suit. It doesn’t crank out short swing turns like the Dynastar Legend, Elan 84XTi or Fischer Pro MTN 86ti, preferring a patient, GS-style turn over a manic-y quickness edge-to-edge. As noted above, it performs better when you load and steer the shovel early in the turn, which can feel hooky to skiers who like a quick edge-to-edge rhythm and an easy swingweight. The Origin 90 is a very fun ski for people who expect softer snow conditions in the Frontside experience, and all-in-all, a good Rocky Mountain/West Coast all day ski for a lot of folks.

The Origin 90’s elongated, low-profile “Stealth Rocker,” along with the ski’s forgiving flex, provide a decent amount of Float and ease of initiation in softer/mixed snow conditions. Like most skis in the Frontside Category, not to the point that you would want to make this a go-to All Mountain ski for wilder, backside terrain or when there’s more than a few inches of new snow, but enough to move it up your rankings for a true Frontside ski for typical lift-served days in Colorado, Montana or Utah. The Origin 90 did earn two 10s (out of a possible 10) in this classification, with testers remarking on how well it did perform off-piste, along with a couple of 8s and a majority of testers giving it a 6.

That forgiving flex and low profile rocker also contribute to the ski having a nice smooth, even feel underfoot. The mix of bamboo and Liberty’s “Speecore Carbon,” result in a nice mix of dampness and vibration absorption in the middle of each turn, along with a little more energy on the edge change. It also means the ski feels familiar right away, at least for more standup style GS style skiers who won’t have to adapt their style to ski it. Testers who enjoyed the Origin 90 off-piste, gave it 7s and 8s in this classification, while the more on-piste minded testers gave it a 4, 5 or 6.

Edge Hold also receives decent marks for the Liberty Origin 90. Although not in the upper echelon of unshakeable grip alongside the likes of the Blizzard Brahma and Head Monster 88, there’s more than enough traction throughout the full flow of each turn to handle almost anything you’ll encounter on typical groomers, bumps and windpacked bowls. Again, it earned 8s and even one 10 for its off-piste handling, and 5s and 6s for how it gripped the harder snow on-piste.

Carving Pleasure dropped off in short swing turns, especially on harder snow, when it felt like the ski was being pushed out of its comfort zone. That low profile rocker tip takes a little bit more room to load, and does not react as well to a quicker, more powerful edge-to-edge style. Slalom-style skiers will feel like the tips are a little hooky, and that they have to make a more aggressive upweight for the edge change, rather than just steering into the carve.

That also applies to Turn Shape Variability, where GS-style skiers will get the most satisfaction out of the Origin 90, making a rhythmic mid-radius turn wherever they go. In the Frontside Category, hard charging edgeheads who want a ski that puts a premium on hard snow performance have plenty of other options in this test. It’s a good ski at a good price, recommended for mostly West Coast passholders who want to save a little more money for beer and gas.