Sunlight, lowlight, dusk, dark or fog, bike lights are a critical safety feature for the cyclist. Many will argue that brightest is best. This is true for mountain biking on singletrack in the dark woods, where toting 1500 lumens of retina-detaching light to illuminate every rock or log on the trail is totally worth it. But is 1500 lumens really necessary for urban riding? Given that a car’s headlight is roughly 700 lumens, you’ll win the brightness battle, but at the cost of safety to the driver or oncoming cyclists being blinded by such an intense beam. For urban riding, something in the 600 to 1100 lumen range is more like it.

For this test five great contenders were selected from established lighting companies. Brightness ranged from 640 to 1100 lumens.

Ultimately, the Fenix BC21R 880 took Best in Class because it hit the sweet spot in terms of illumination and ease of use at a pretty nice price point. 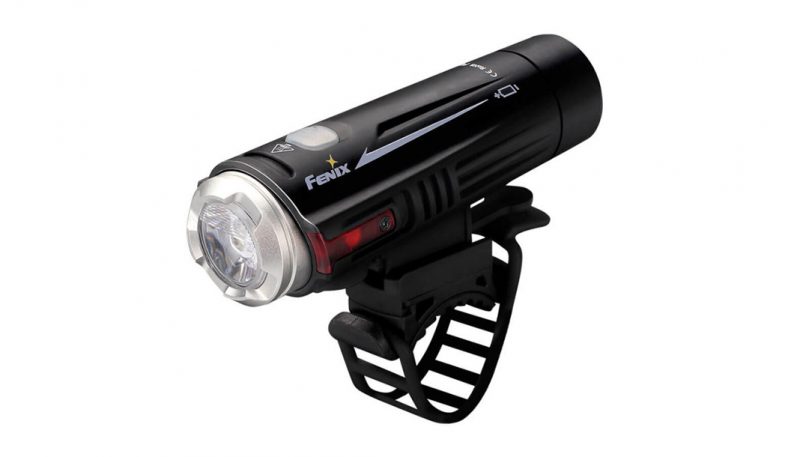 The Fenix BC21R projects a bright, broad beam of 880 lumens. It comes with a spare 18650 rechargeable Li-ion battery and a power-saving feature called Intelligent Output Downshift that automatically steps the light down to a lower setting, both of which extend ride time. However, it does not include a helmet mount and the rubber-ladder handle bar mount strap is flimsy. 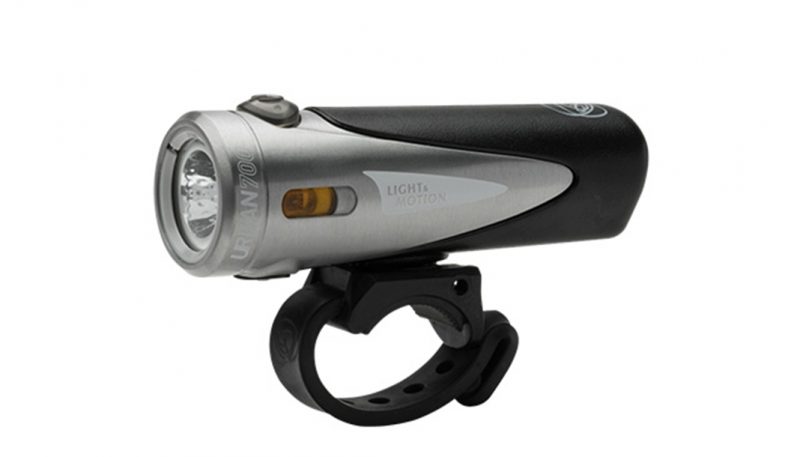 The Light & Motion Urban 700 delivers a bright, broad, and even beam of 700 lumens. It is durable, sleek and compact and its quick-release silicone mounting system accommodates a wide variety of handlebar sizes, making it fast and simple to move between bikes. However its versatility is limited without purchasing the separate helmet mounting option.

Best For: Keeping it Simple 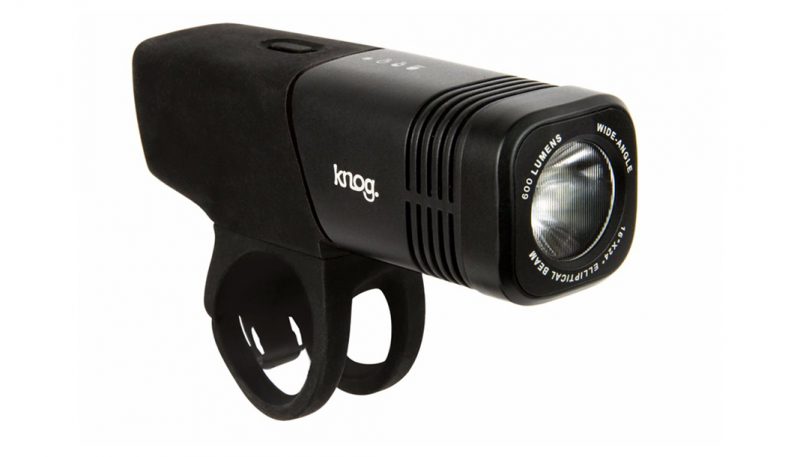 The Knog Blinder ARC 640, which hails from Australia, projects a bright, broad beam of 640 lumens and hits the sweet spot for bike commuting in terms of overall quality and looks. Powered by a USB-rechargeable Lithium Polymer battery, it is durable and its integrated silicone mounting system accommodates a wide variety of handlebar sizes. However the light switch is challenging to operate when wearing gloves. 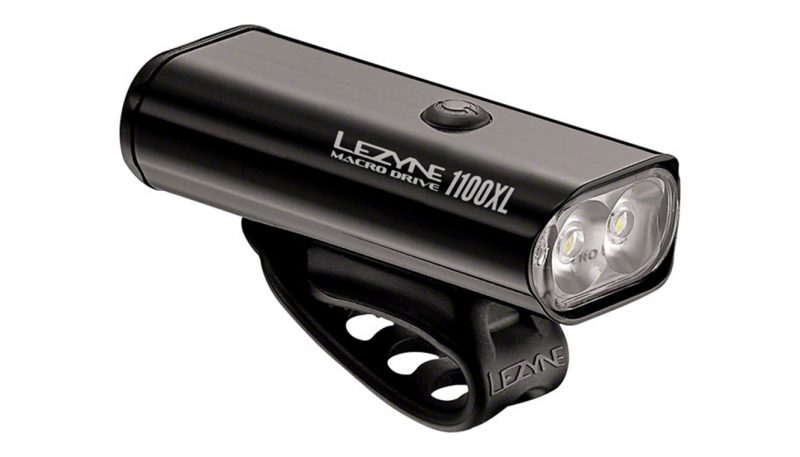 The Lezyne Macro Drive 1100XL projects a bright, wide, powerful beam of 1100 lumens. It has six brightness modes to provide a variety of illumination levels for urban and mountain bike rides, including a flash and pulse mode. However it can be difficult to attach to handlebars due to the miniscule pull-tab.

Best For: The Mountain Biker Who Occasionally Dabbles in Urban Cycling 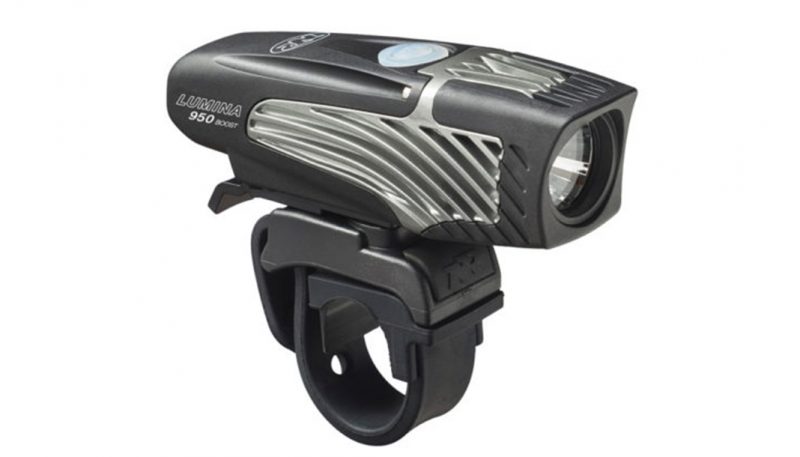 The NiteRider Lumina 950 Boost projects a bright, focused, powerful beam of 950 lumens. It has six brightness modes to provide a wide range of illumination in both urban settings and mountain bike trails. However its mounting strap is awkward to attach and easily pops off.

The winner here was a tie between the Knog Blinder ARC 640 and the Light & Motion Urban 700. With four light modes each, all the cyclist needs to do is turn on and click through the four modes. The Knog starts with High and clicks down through less bright modes until Flash mode with one click per mode. The same is true with the Light and Motion, except that it starts with Low and clicks brighter to Pulse. The most complicated of the lights was the NiteRider Lumina Boost 950. The light begins with a single click for Low, Medium, High and Walk. But if you need Boost mode for the full 950 lumens, you have to remember that Boost and Flash are accessed from High. Boost requires depressing the button for three seconds. Flash requires two rapid clicks. Testers found they had to do a lot of clicking to find High to then go into Boost or Flash. The Lezyne Macro 1100XL is only slightly easier to use. It, too, has six modes and one click per mode rotates through each option. It raised the question, does a cyclist really need that many modes? The Fenix BC21R was right in the middle. It has five modes that click intuitively from Low to Flash. Its memory feature allows you to access the mode you last used with the first click which testers really appreciated.

The Fenix BC21R stood out in this category thanks to its Optimized Dual Distance Beam feature, which works to equalize the beam’s long distance projection while still illuminating down upon the closest surface. The NiteRider Lumina 950 Boost, Light and Motion Urban 700 and Knog Blinder ARC 640 also had very good beam projection that focused the light on the path ahead. The Lezyne Macro Drive 1100XL also did well in this category, but its beam projection was wide with less intense light on what lay directly ahead. But cyclists who want one light for both singletrack and urban use will likely benefit the most from the Lezyne Macro Drive 1100XL.

Scoring the highest overall in this category is the Fenix BC21R thanks to its Flash feature, which flashes between High and Low and two unique features that help maximize ride safety: The Intelligent Output Downshift and spare 18650 rechargeable Li-ion battery that fits in a seat pack or pannier. The Lezyne Macro Drive 1100XL just missed tying with the Fenix with its mode-specific battery-indicator flash which tells the cyclist when to “downshift” to conserve light. The Knog Blinder ARC 640, Light and Motion Urban 700 and the NiteRider Lumina 950 Boost tied for third with enough features to make a bike commute safe, but missed out on some nice options.

All of the lights in the test can be used as flashlights around the house or for camping and are relatively easy to transfer between bikes, though some—like the NiteRider Lumina 950 Boost and the Fenix BC21R—are easier than others. These two contenders come with a very nice quick-release tab to detach and re-attach the light from the mount with a quick click. Helmet mounting is also pretty important, especially for mountain bikers who want light shining where they’re looking. The only lights in the test that came standard with helmet mounting kits, though, were the Knog Blinder ARC 640 and the Light & Motion Urban 700.

Ease of use, beam quality, features and versatility are all critical elements when cycling, whether in the city or gravel riding or mountain biking in the dark. But the focus on this test was strictly urban and for bike commuters riding up to five days per week.

City riding isn’t about the brightest bulb on the bike. It’s about being seen and being able to see. And doing it in the easiest, most intuitive way possible. The easiest option is to just hit one button when pulling out of the garage in the dark morning hours or after a long day at work.

Commuters, errand runners, pleasure riders … heck, all cyclists should have at least one light mounted on their handlebars or helmet and in the “on” position — no matter the time of day — to maintain visibility. Cars have daytime running lights. So should bikes.

These lights were tested by a team of two testers who commute to work up to six miles each way on designated urban bike paths, bike lanes and along the trails of a nature preserve. The test period ran from May to early August. One tester commutes to work when it’s always dark in the 4:00 am timeframe. The lights were also used to add that extra eye-catching visibility in daylight, low-light, fog and rain. 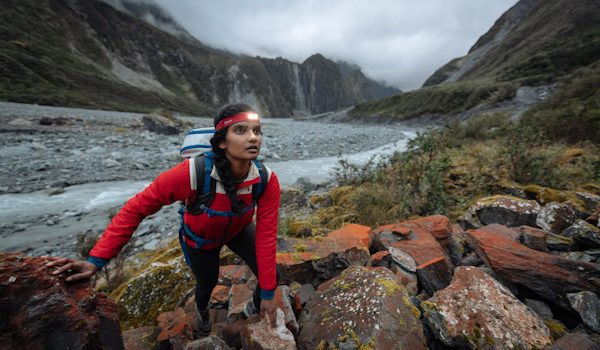 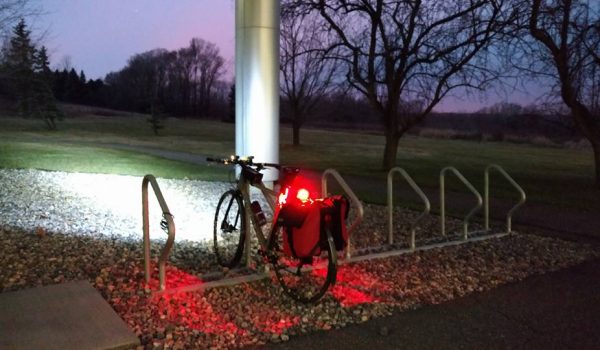 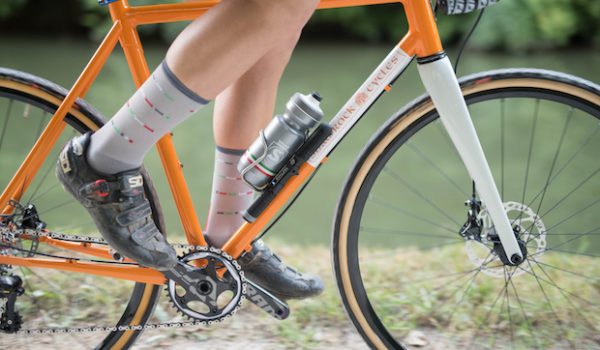 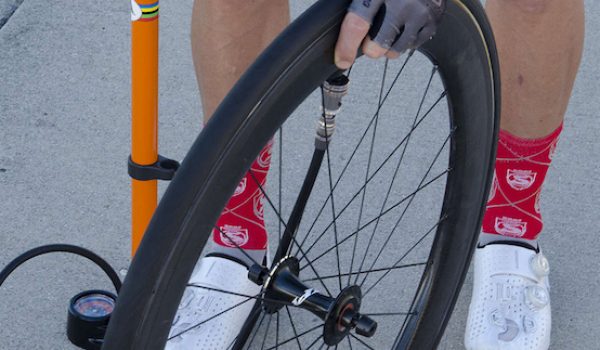 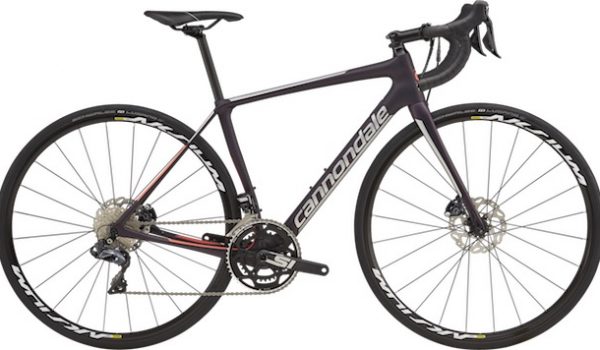 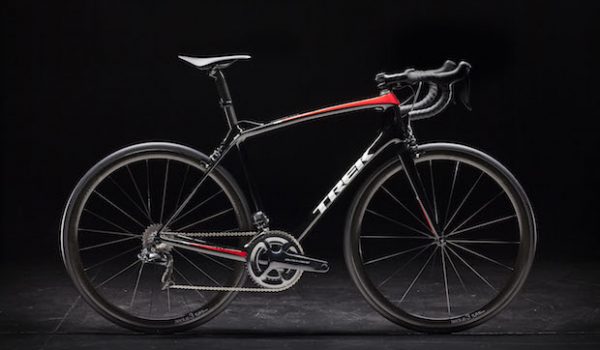 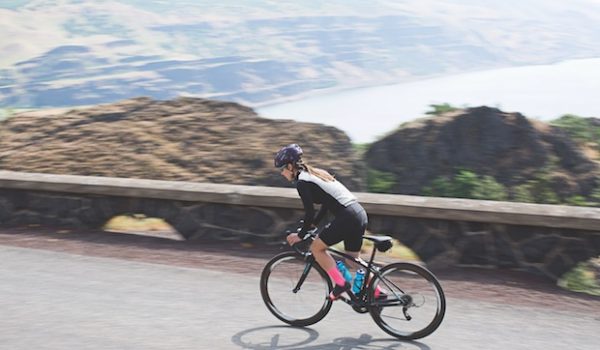 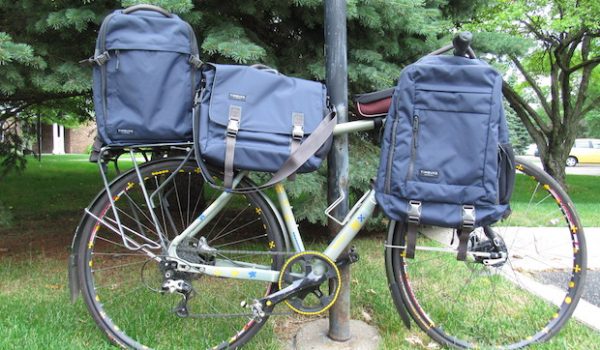 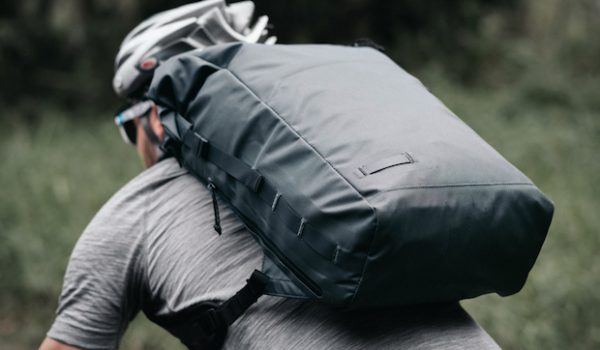 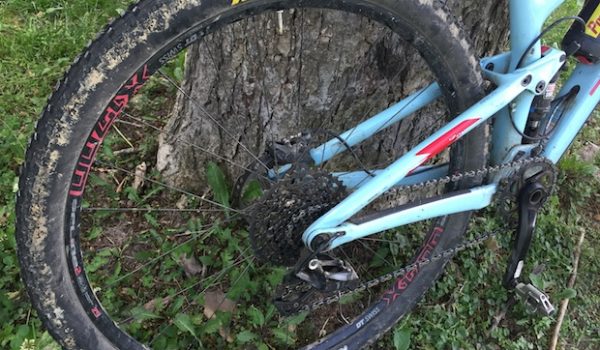 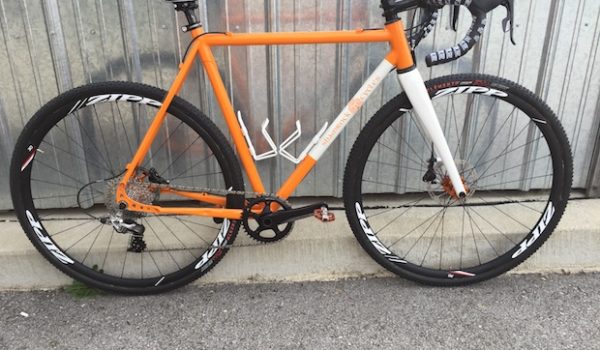 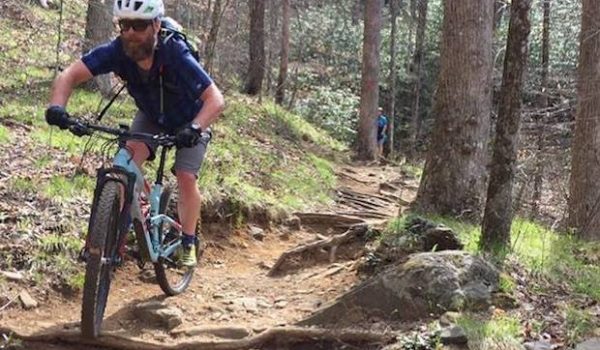