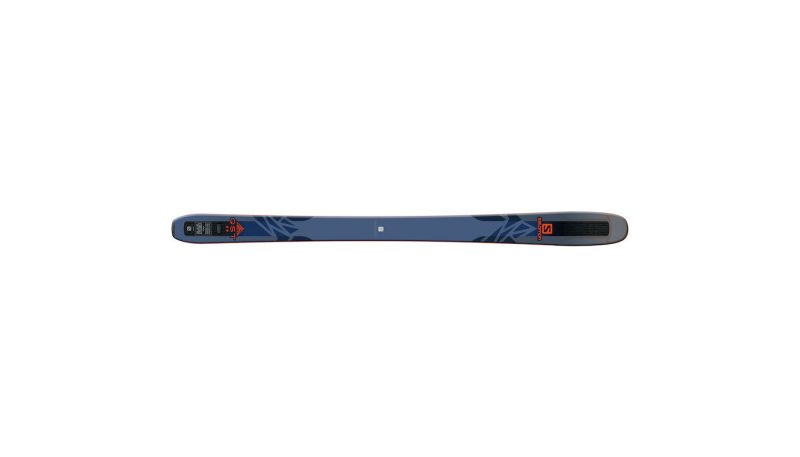 THE VERDICT
Salomon’s QST 99 is an All Mountain ripper for skiers who prefer to do their lift-served shredding off-piste. The super damp, super smooth feel of this ski is key to its soft snow glide, thanks to Salomon’s CFX Superfiber construction (carbon stringers interwoven with flax), Titanal insert for dampness and hold, and double layers of rubber elastomer under the binding and in the tail and tip. All-Terrain Rocker 2.0, with pronounced tip rise and a moderately upturned tail, contributes to how easy this ski is to get into a turn in mixed snow conditions. While what Salomon calls “Carve Zone” camber, comprising 70 percent of the surface area between the tip and tail, results in exceptional grip. Spend too much time trying to carve this ski on-piste, especially at higher speeds, and that dampness can feel a little overwhelming and sluggish, especially if you try to make a tight slalom arc. We recommend the Salomon QST for almost exclusive off-piste skiing, with a focus on medium to long-radius turns through anything in your path.
FULL REVIEW

Salomon’s QST 99 features all the smooth power of a Rossignol Experience 100 HD, unshakeable edge hold of a Blizzard Bonafide, and vacuum smooth carveability of an Elan Ripstick 96. But it exhibits all of these great traits without too much flash or hyper energy, exhibiting a quiet kind of authority that can almost feel meditative when you’re making buttery GS turns down a windblown face. This is one of the dampest feeling skis in an All Mountain Category where “damp” is most likely the adjective we’ve used the most. It’s also quite likely the most off-piste minded of the group, with a penchant for making its go-to medium-radius turn where the snow is softest and/or most cut-up. All-Terrain Rocker 2.0, with pronounced tip rise and a moderately upturned tail, contributes to how easy it is to get this ski into and out of a turn. And Salomon’s CFX Superfiber construction (carbon stringers interwoven with flax), a Titanal insert for dampness and hold, and double layers of rubber elastomer under the binding, tail and tip, are key to providing the wonderfully mellow ski-to-snow contact.

That mellow feeling can feel a little cathartic on groomers, however, where some testers compared the QST 99 to someone being asked to play backyard football after eating too much Thanksgiving turkey and laying down on the couch. Making short swing turns, especially on boilerplate, is also outside of the QST 99’s wheelhouse. Carving scores in particular were varied for the QST, depending on whether testers really enjoyed the ski’s smooth steering off-trail, or were frustrated by trying to force it into some quick fall-line steps back on-piste. We recommend the Salomon QST for primarily off-piste All Mountain skiers who want an incredibly smooth ski that can eat up a buffet of terrain without much work.

Overall scores for the Salomon QST 99 ranged from a series of strong 8s (out of a possible 10), to one 10, and all the way down to a couple of 6s. As we noted in the Full Review (above), that is almost exclusively attributable to the ski’s excellent performance off-piste, and its lack of Responsiveness on the hardpack. By focusing on superior hold and damp ski-to-snow contact in one category – crud, powder, soft bumps, and just about any terrain where the wind has been at work – led directly to a lack of liveliness on-piste.

That same thought process applied to how our testers rated the Salomon QST in the Responsiveness characteristic, although there was an even more pronounced variety in the rankings, with scores of 10, one 4, three 6s, and several 7s and 8s. Skiers who want a hardpack carving ski won’t find it here. This is for off-piste arc’ers who want a sublimely predictable off-piste experience.

This was the one characteristic where the Salomon QST 99 got its highest marks, thanks to the carbon stringers, Titanal insert, and Elastomer dampers that are critical to this ski’s smoothness. The Stability is excellent.

Another relatively high scoring classification for the Salomon QST 99, augmented by the extra rocker in the All-Terrain Rocker 2.0 design, and also the extended sidecut of the Carve Zone camber construction, which off-piste, makes this ski exceptionally easy to get – and keep – on edge.

Much like Responsiveness, a tester’s preference for the hardpack or off-piste aspects of any All Mountain ski design, were made clear by how they ranked the Salomon QST 99 in this particular characteristic. Scores were stronger for Carving than they were for Responsiveness, with several 8s, with also a few 6s, and two strong 10s from a couple of testers who would arc this ski all season on off-piste terrain if they were given the chance.