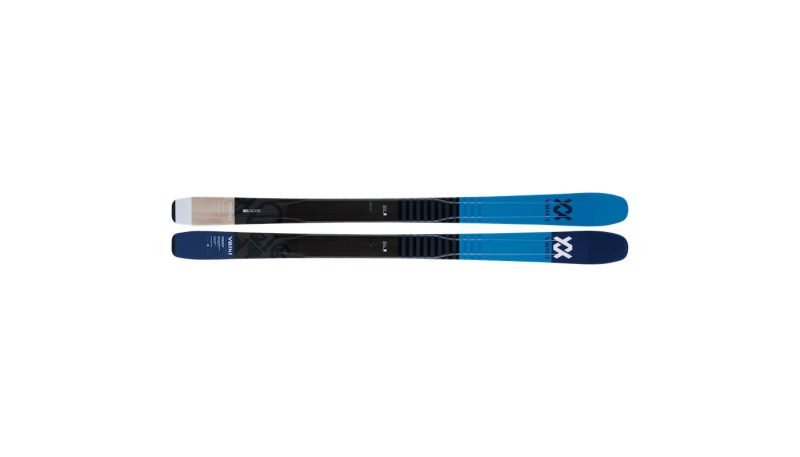 THE VERDICT
Volkl’s 90Eight featured some of the greatest turn variability in the All Mountain Category, with an ability to make powerful, long arcs, and also carve short slalom trenches on the hardpack. Alongside the Dynastar Legend X88, it made some of the best short swing turns in a category where most skis specialized in the medium radius. With a mix of tip and tail rocker, it’s easy to initiate. And Volkl’s popular 3D.Ridge construction, with a kind of cockpit of materials – and power – in the center of the ski, leading to a thinner profile and less material at the edge, gives the ski maneuverability at a lesser weight. The 90Eight does have less float and pop than many skis in this category, with an obvious preference for hardpack. It’s a great pick for All Mountain hard snow-minded skiers who want a ski that can crank short turns on the steeps, and quickly transition to GS and even Super G style turns wherever the terrain opens up.
FULL REVIEW

In the Volkl 90Eight, Volkl’s popular 3D.Ridge construction, with a kind of cockpit of materials – and power – in the center of the ski, matched with a thinner profile and less material at the edge, gives the ski tremendous maneuverability at a lesser weight. A multi-wood core of more ash under the ridge, and poplar toward the edges, along with carbon stringers and the brand’s unique fiberglass (3D.Glass) construction reinforce this concept. The perfect amount of tip rocker – at least where hard snow conditions are concerned – also results in a ski that is easy to initiate. Whether you are making short swing turns, or going really fast, the 90Eight has a remarkable ability to quickly get from edge to edge. Almost every tester noted how well the ski Carves, its excellent edge hold, and the wide variety of turn shapes it could quickly master, which was a decidedly unique ability in the All Mountain Category, where most skis mastered one and one turn only, the medium radius.

Off-piste, the ski was not as exciting. It didn’t feel as Responsive, did not exhibit as much Resort Float, and just didn’t feel as precise and accurate as it did on the hardpack. The ski handles well in bumps, but in crud and mixed conditions, felt like it would have benefited from an increased width, and/or a more forgiving shovel flex. “Not a lot of feedback,” and “not a lot of rebound,” were how testers tended to describe how the 90Eight feels when you try to take it deep into the trees or into a field of light mank. “It’s more of an East Coast All Mountain ski,” one tester summarized, “and more of a Frontside ski when you get out West.” Although not entirely accurate given the 90Eight’s amazing versatility in regards to turn shape, it’s certainly worth noting the ski’s preference for harder snow when considering what kind of terrain you want to tackle once you’re on the 90Eight.

The Volkl 90Eight did score three 10s (out of a possible 10) for its Overall performance, with one tester saying, “This is a rocket ship!” After that, there were 8s and 7s for the ski’s ability to make a variety of turns with finesse, and a few 6s in response to how different the ski felt – particularly in regards to Responsiveness – once it was taken off-piste.

The Volkl 90Eight’s scores for Responsiveness also ran the gamut, including top scores from hard carving testers who loved how quickly the ski could alter its turn shape to 6s and 5s from testers who weren’t as impressed with its performance off-piste. The ski definitely needs to be on edge, no matter what kind of turn shape you prefer, and whether you want to ski it on or off-piste.

The Stability classification was where the Volkl 90Eight earned its highest marks. That included a couple of 10s, several 9s and 8s, and one 7 from one of our standup style testers who felt the stiffness of the tail and overall dampness of the ski – as well as its need to be on edge – hurt its appeal to less technical skiers who couldn’t as easily access the ski’s benefits. It’s definitely worth noting that even testers who weren’t impressed with the 90Eight’s off-piste performance still remarked on the great Stability the ski exhibits.

The lowest scores for the Volkl 90Eight were reserved for its lack of Resort Float. The tip rocker worked great on the hardpack, and in moguls. But in the true myriad of mixed snow conditions that is the off-piste, the ski’s stiffer shovel flex and lower in category Responsiveness reaffirmed how much better this ski is on-piste than it is when you take it off.

Carving scores were relatively solid, despite the 90Eight’s better performance on hardpack snow than it showed when the snow was soft. Much like the ski’s solid marks in the Stability classification, it’s worth noting that for skiers with the skills to make technically proficient turns wherever they go, this Volkl can crank hard arcs wherever you take it. And, as noted in the Full Review, it’s one of the few skis in the All Mountain Category that can make any kind of turn you like.