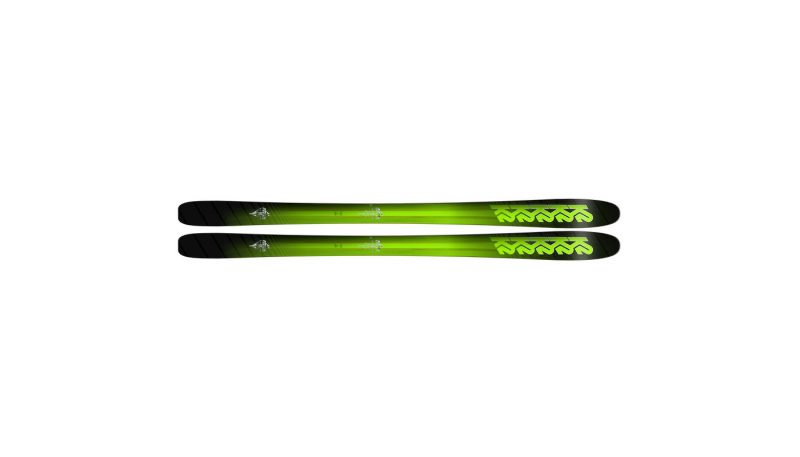 THE VERDICT
K2’s Pinnacle 95 represents the most All Mountain focused of the brand’s Pinnacle line (there is also a Pinnacle 88, reviewed in our Frontside Category, and more off-piste oriented Pinnacle 105, which we review in the Powder Category), with the mission being that the ski will perform equally well on-piste as it does off. Our testers found the ski could get overpowered in hard snow conditions, where it lost performance at higher speeds, and was more effective pivoting into each new turn rather than gradually carving, in part because of a tail that seemed to hang in the turn for that one extra second. Where the ski performed best was in softer snow, where it was more Responsive, with a solid edge hold, almost playful mid-radius turns, and a big sweet spot. Better for All Mountain skiers who expect softer snow conditions on a daily basis than true hardpack carvers, the Pinnacle 95 is recommended for GS-style skiers who want more traditional technology in their All Mountain setup.
FULL REVIEW

K2’s Pinnacle 95 is built with what has become a fairly standard All Mountain construction, including a wood fir woodcore, All Terrain Rocker (with a rockered tip), and some Titanal laminates. K2’s proprietary addition to this construction is the Konic Technology, where the brand distributes some of the stiffer, more edge hold focused materials in the ski out to the edges, where they can have the most impact. Off-piste, as our testers found, that design works great. This ski had a predictable, ease of initiation in softer snow, along with a reliable edge hold that gave testers the confidence to start pushing the ski right off the lift. What they found was a fun, Responsive ski with a progressive flex that easily moved from edge to edge, particularly in medium-radius turns, with a good swingweight and a sizeable sweet spot.

Move the ski on-piste, and that level of performance can fall off a little bit. Of particular concern on harder snow conditions was that testers didn’t feel they could load up the shovel of the ski and pressure the Pinnacle 95 through a complete turn, but instead had to be more aggressive steering it, often in a quick pivot. The ski also didn’t have as much hold at higher speeds on hardpack, where it was overmatched in Stability and Carving by other skis in the All Mountain Category, like the Head Kore 93, for instance. What felt easy to initiate with strong edge hold in the bumps and trees, suddenly felt “not very lively,” according to one tester, “on the heavier side,” once you tried to rocket down the last steep pitch back to the lift. The Pinnacle 95 is best recommended for All Mountain skiers who tend to enjoy softer snow conditions and tend to do the majority of their skiing off-piste.

The K2 Pinnacle 95’s Overall rankings were slightly above the middle of the pack. The ski’s ability to perform off-piste, where its ease of initiation and predictability continued to expand its sweet spot, was offset by how, quite literally, the ski seized up on the hardpack. It had a tendency to go from smooth and carefree in soft snow, to being hard to manage and a little planky once the snow hardened up. We suggest you ski this ski where the groomers don’t go, at least after the bumps have formed, and you’ll allow it to work where it’s at its best.

Responsiveness rankings were a little higher, thanks to how well this ski initiates once you get into more mixed conditions, where you can also rely on its ability to continue to move quickly from edge-to-edge. Thanks to the tip rocker and progressive flex, the Pinnacle 95 actually initiates easily everywhere, it’s just that on harder snow, the ski doesn’t keep flexing into a turn as well as it does on the softer stuff.

One of the best tester comments about the K2 Pinnacle 95 called it, “Stable and dependable, like Volvo Sport Wagon.” It is a consistently Stable ski, sometimes to a detriment. That Stability is at its best once the conditions are at their most mixed, where the design of the ski lends itself a more laid back performance than it does on-piste. But even on the hardpack, the ski’s fixation on delivering a mellow mid-radius turn – along with more pressure throughout the tail at the finish – is one reason it’s hard to get out of the old turn and into the next.

Resort Float is the classification where the Pinnacle 95 earned its highest marks. As you might have noticed while reading this review, the ski performs at its best when it’s being skied off-piste. It’s one of the clearest differences between on and off-piste performances we found in the All Mountain category. So yeah, this ski has some float.

The Pinnacle 95 is not a ski where testers went to new lengths trying to poetically describe how it augmented the art of the carve or defined the beauty of edge hold in a single round arc. This ski is a little more blue collar about it. It does turn. It does hold an edge. And it is easy to initiate. It just does all those things better off-piste.