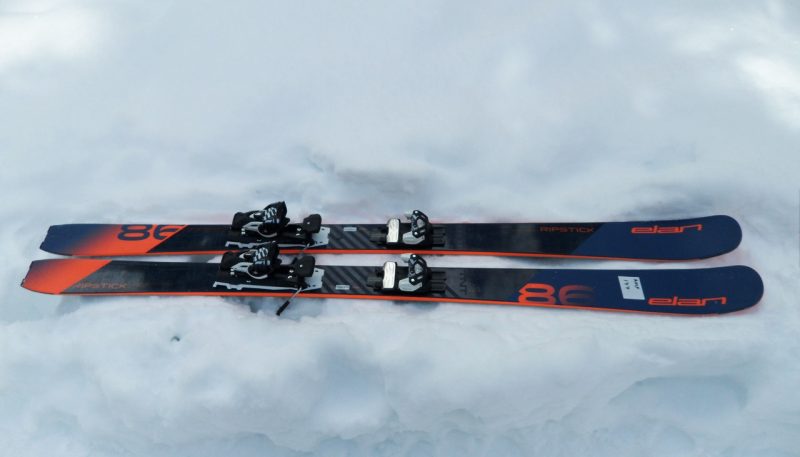 THE VERDICT
The Elan Ripstick 86 is one of the purest carvers in the Frontside category, with wonderfully smooth turn initiation and excellent edge-hold. It features the brand’s Amphibio Technology, with dedicated left and right skis. Amphibio has more camber on the inside edge and rocker on the outside edge of each ski, resulting in really smooth turn initiation that rolls into a short to medium radius arc with a buttery feel. It doesn’t have enough float to handle more than almost exclusively hard snow conditions, and also felt like it had a bit softer flex than other skis in the category, resulting in a desire to ski at more moderate speeds, and in a medium turn radius. Testers did find this ski incredibly responsive and versatile on Frontside conditions, and also appreciated its ‘pop’ and sense of energy underfoot.
FULL REVIEW

Thanks to Elan’s Amphibio technology, which integrates both rocker and camber profiles into dedicated left and right skis, our testers found the Ripstick 86 to be super smooth and easy to initiate, responsive, and able to quickly shift into a variety of short to medium radius turn shapes. For such a smooth ski, with such excellent edge-hold and grip, they also enjoyed the ski’s liveliness and pop. For a brand known for its Cadillac smooth handling on hard snow conditions, the Ripstick 86 has a kind of energy that springs you from turn to turn with confidence.

Part of that is due to the brand’s “Tubelite Woodcore,” technology, which we first tested last season in the Ripstick 96. Tubelite features two carbon tubes inserted into a laminated woodcore, which results in a lightweight flex with power that is easy to access. In the shovels, Elan also adds what the brand calls “VaporTip Inserts,” to absorb vibrations and reduce weight. Elan refers to these two design features as TNT Technology, and it is key to creating such lightweight performance. The ski does not have much float, despite the brand’s Mountain Rocker Profile, and feels much better suited to carving on hard snow or groomed surfaces than it does for venturing off-piste. We recommend the ski for advanced intermediate to expert skiers who want superior edge-hold and precision that is easy to access.

The Ripstick’s ease of use, edge-hold, and liveliness, and super smooth performance earned it above average to high marks in the Overall classification, with a 7 at the lowest (out of a possible 10), several 8s, one 9, and a 10 from one tester who ranked it as “Excellent.”

The Ripstick 86 did not score as well for Floatation. It did earn some 8s at the top end, especially from testers who felt the ski’s incredible ease of initiation (thanks to the Amphibio technology) transfer into softer snow, but then received one 7, several 6s, and a 5 in relation to skis like the Head Kore 93, Legend X88, and Rossignol Experience 88TI. The Ripstick 86 is at its best making effortlessly perfect medium radius turns on harder snow surfaces.

In the Stability classification, the Elan Ripstick 96 did well, earning one 10 and one 9 for how well it maintained balance, dampened vibrations, and kept contact with the snow, all from two of our East Coast-based testers who make an effort to try and push each ski to its limit. The ski also garnered several 8s from testers who loved how it performed in medium radius turns, with a nice mix of hold and liveliness. The lone 7 the ski received—its lowest score in this classification—came from a tester who felt those valued attributes became less apparent when he took the ski off-piste.

Edge Hold scores were even higher, starting with a couple 10s, several 9s, and nothing lower than an 8. Once the Ripstick 86 grabs hold of an edge—which it does quite quickly, thanks to the Amphibio Tech—its keep hold of it. The fact that it does so with such energy, makes it a pleasure to arc.

Which, of course, led to high scores in the Carving Pleasure classification of the Frontside test. If you like to carve—like a racer, a corduroy cowboy, or even a Sunday slush artiste—the Ripstick 86 will make you love it even more. This ski is like adding carving helper to your arc. It makes something that is already a lot of fun, feel even better the more you ski it.

In probably the most varied scores the Ripstick 86 received, the Turn Shape Variability classification was all over the place. Some testers felt it performed at its best making short swing turns at slower speeds, while even more preferred medium speeds at a medium radius. No one would’ve rated it in the Super G class, like the Blizzard Brahma, for instance. Two 10s, two 8s, and a couple of 7s and 6s.