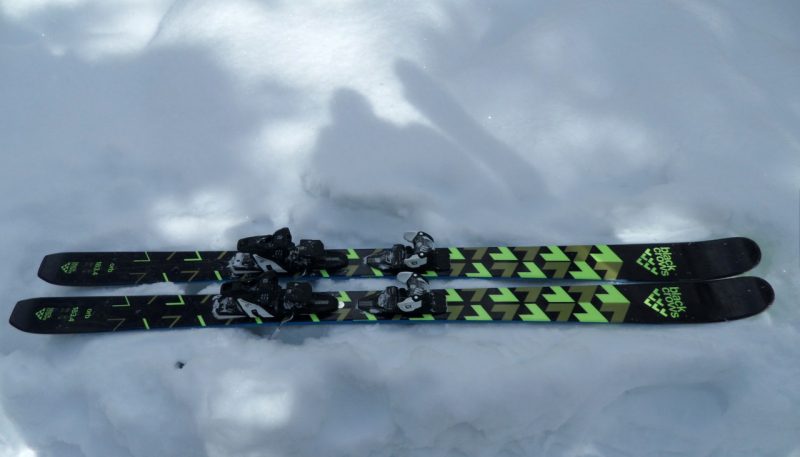 THE VERDICT
The Black Crows Orb opened a lot of eyes on our test team with its ability to make effortless short turns both on and off-piste. A fun, eminently maneuverable ski in almost all conditions–especially cut up snow and bumps–the Orb’s ease of initiation and friendly progressive flex provided a welcome break from many of the race style skis in this category. It’s not for skiers who want to test the speed limit. It is for skiers who want a fun all-mountain Frontside ski with easy-to-access performance.
FULL REVIEW

Black Crows was invited to our annual test for the first time last season. This year they continued to score positive results across the board for the brand’s quality and innovative take on ski construction. While the Orb features many of the woodcore, twin Titanal layer characteristics of many of the other skis in the Frontside category, its focus on a progressive “front rocker” tip and shovel with traditional camber body and tail makes for a ski that is incredibly easy to initiate and also easy to maneuver, with strong results off-piste.

The Orb did not perform as well in longer turns, at higher speeds, or in pure medium to long radius carved turns compared to skis like the Atomic Vantage 90 TI, the Blizzard Brahma, or updated Rossignol Experience 88. It did, however, do very well in short turns, cut up snow, mid to slower turns and overall ease of use. This is a great Frontside ski for advanced to expert skiers who want to enjoy the entire mountain at a less frantic pace.

The Black Crows Orb continued to perform at or near its showing in last year’s test, with Overall classification scores of 9 and 10 (out of a possible 10) at the high end, down to several 8s, one 7, and a couple of 6s from testers who felt the ski lost performance at the higher speeds—and on harder snow—that they like best. As noted in the Full Review, this is a very approachable ski with easy-to-access performance (especially in softer snow) that make it a great lift-served, Frontside pick.

The Black Crows Orb features the brand’s “Front Rocker” and “Medium Classic Camber,” which combine to create a ski with super easy turn initiation and a forgiving flex. That, in turn, also equals superior Float for this category, and very good response. If you are looking for a Frontside ski for the season that can also handle some sneaky powder days, this extra bit of versatility makes the Orb a strong choice. “Floaty,” “Makes a nice short turn in the mank,” and, “Very responsive and easy to turn,” were a few tester comments about the ski’s maneuverability, especially off-piste.

Despite the Titanal Laminates, however, the Orb did get outclassed in the Stability category by some of the damper skis in this class. It’s not the best pick for skiers who want to rip World Cup style carves on hardpack, which also means it’s likely a better choice for skiers who want more playfulness and forgiveness. The ski did earn several 8s and 7s (out of a possible 10) for Stability from testers who liked how well it skied softer snow conditions, but testers looking for bomber hard snow performance gave it 5s and 6s. “It felt a little too soft for a true Frontside ski,” one tester wrote.

The same goes for the Edge Hold, where the rockered tip didn’t hold up as well on the boilerplate for skiers who wanted more tip to tail contact. The Orb did not score as high for testers who like to pin it on the groomed. At the same time, that’s why it feels so much more maneuverable than many of the other skis in the Frontside Category when you take the ski off-piste. Again, while the Orb did score some 8s for how easy it was to steer in cut-up snow and bumps (where it was really fun), that sense of grip was diminished for some testers when they tried to push it into a GS-style carve on the hardpack.

For those of you taking notes at home, what a ski gives up in stability and edge hold in favor of maneuverability and forgiveness, can negatively impact the Carving Pleasure experience. The Orb turns great, and often, and just about anywhere on the Frontside you want to take it. It just won’t reward super technical skiers who want to make textbook turns under the chairlift as much as other skis in this class.

Short to medium radius turns are a strong point for the Orb, especially when the snow is softer and/or more cut-up. High speed, long radius turns are less rewarding. For some testers, the overall ease of initiation off-piste got the ski scores of 8s and 7s in this classification, while anyone who wanted to rip booming Frontside carves on this ski gave it much lower Turn Shape Variability marks. Bottom line: the Orb is a ski that performs best on Pacific Northwest and Rocky Mountain Frontside conditions than it will on any patch of blue ice you might find in the East.