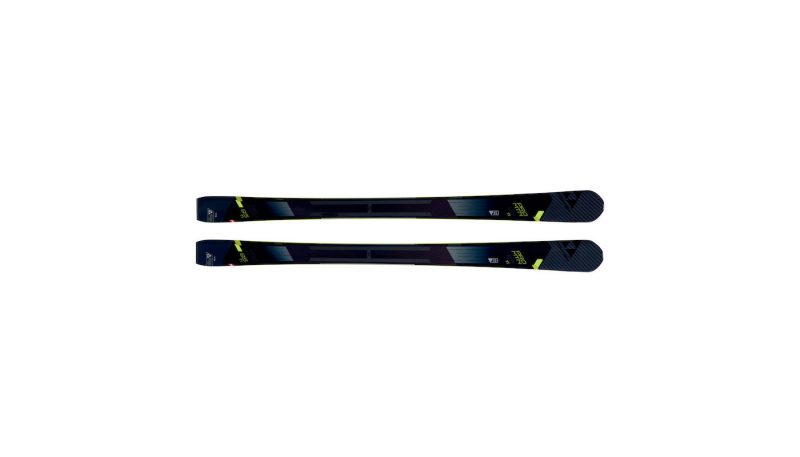 THE VERDICT
The Fischer Pro MTN 95 Ti stood out for its stability, damp hold, and carving, particularly on hard snow surfaces. The ski, which features full-length Titanal for stability and hold, as well as a milled “Air Tec” woodcore, which reduces the ski’s weight, provides a wonderful mix of power with ease of use. All Mountain Rocker gives the ski super smooth turn initiation in a variety of speeds and shapes, while the Titanal laminates (which are also longitudinally milled to reduce weight) add torsional stiffness for increased edge grip. The ski is not lively underfoot, does not offer as much off-piste float as other skis in the All Mountain Category, and like the Volkl 90Eight, prefers hard snow on-piste conditions, where the ski performs at its best. The quickness of the ski edge-to-edge increases the Pro MTN 95 Ti’s versatility for All Mountain use, especially if you prefer to ski on packed snow conditions as a daily ski at your local resorts.
FULL REVIEW

The Fischer Pro MTN 95 Ti has a lightweight yet very damp feel thanks to its Air Tech construction, which features a strategically milled woodcore and Titanal laminates for a reduction in weight. The All Mountain Rocker (pronounced rise in the tip, less rise in the tail, and camber underfoot), combined with carbon in the tip and tail, help enhance turn initiation, with a smooth transition from edge to edge and constant ski to snow contact. The ski is super predictable and a pleasure to carve in a variety of turn shapes, with an unshakeable sense of stability underfoot. Testers found that sense of performance only amped up the harder they pushed the ski – especially on-piste – where it seemed to have no speed limit, making “rubbing elbow turns,” according to one tester, who was thrilled by how deeply he could angulate while driving the Pro MTN 95 Ti into a trench-scoring arc.

The ski is not lively, and when skied off-piste can feel a little sluggish when it has to drive through mixed conditions or while trying to pivot in the bumps. At lower speeds it also lacks performance and needs a little more velocity to showcase its excellent edge hold and damp ski-to-snow contact. This is not a ski that is going to help high-level intermediates get better, and is recommended for technical skiers who like to make swooping, edge gripping turns in harder snow conditions, and long days of eating up vertical with the wind in their face.

For its cverall place in the All Mountain Category, one tester marked the Fischer Pro MTN 95 Ti as his “favorite,” one tester gave it a “Good,” and every other tester said it was “Excellent,” (“Awful,” is our fourth option, which given the quality of skis we tested in this category, was hardly ever marked). Numerically, out of the 13 testers who ski the Pro Mtn 95 Ti, that resulted in four 10s (out of a potential 10), and seven 8s. Testers recommended the ski for people who like a damp, powerful turn, and who prefer to ski harder snow or make a technical GS through the softer stuff. “It’s for a powerful skier who likes speed,” one tester wrote, which we believe is completely accurate.

The Fischer Pro MTN 95 Ti’s super damp courtesy of the Titanal laminates, combined with the All Mountain for ease of initiation, did earn the ski mostly high marks for responsiveness. At the top, it got a few 10s as the “Turn Initiator!” as one tester wrote, while another wrote, “It’s great edge to edge.” The tester who gave the MTN 95 Ti its lowest responsiveness rating wrote, “I would’ve liked a little more energy underfoot.” The ski did consistently earn 9s and 8s in this classification, particularly among testers who liked its “all-star flex.”

In an All Mountain Category absolutely packed with stable performers like the Blizzard Bonafide, Head Kore 93 and the Kastle FX95 HP, the Titanal tamped Pro MTN 95 Ti more than held its own with stability scores that were consistently at or near the top of the class. The ski really does seem to perform better and better at higher speeds, or as one tester wrote, “The harder you push it, the more it gives back.”

Similar to several skis in the All Mountain Category, the Fischer Pro MTN 95 Ti, like the Volkl 90Eight, for instance, performed amazingly well on hardpack, especially due to the ski’s snow gripping dampness, but lost some of that ability once we tried to mix it up off-piste. A large part of that is due to the fact that despite the ski’s All Mountain Rocker shape, it just didn’t feel like it had as much float. High scores for this classification included a handful of 8s, but with one 5 and a majority of 6s.

The Pro MTN 95 Ti did earn top rankings for its carving ability, putting it up the top of the All Mountain Category for that classification alongside skis like the Elan Ripstick 96 and Kastle FX95 HP. With a handful of 10s, several 9s, and nothing lower than an 8, this is a ski that consistently provided superior edge hold, especially at speed, where it moves effortlessly from arc to arc. We recommend the Pro MTN 95 Ti for technically-minded skiers who want to carve deep turns in a variety of shapes at their local hill, predominantly on hardpack.