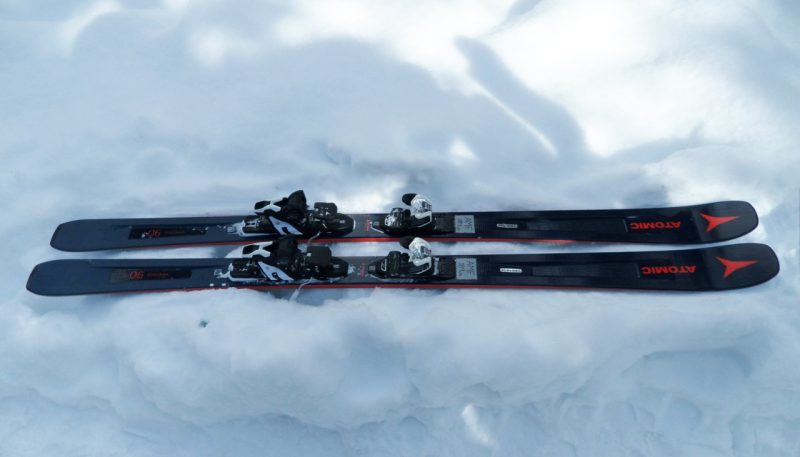 THE VERDICT
The Atomic Vantage 90 TI is one of the most all-terrain versatile skis in the Frontside category, with the kind of multiple condition performance that can easily make this a go-to ski for skiers on any coast. The ski is at its best making medium to long radius turns at higher speeds, with excellent edge-hold. It doesn’t have enough float for days when there’s plenty of new snow. It will crush the bumps, steeps and groomers whenever there’s firmer snow.
FULL REVIEW

Atomic had one of the top scoring skis in the Frontside category last season with the Vantage 90 CTI , which featured 20 percent tip rocker. This year, the brand offered up the new Vantage 90 TI for this category, with several brand new construction techniques that resulted in a ski that performed much better on hard snow. Mainly, it features Atomic’s new Prolite construction, resulting in a lighter ski with reinforcements in key areas around the binding. This ski has amazing ski to snow contact, with some of the best edge-hold in the Frontside class. It can also absolutely rail high speed, medium radius turns, with complete confidence and predictability.

The ski does sacrifice some float, and won’t be the first ski you want to grab for a powder day. But thanks to the brand’s Titanium Tank Mesh and Energy Backbone, as well as Power Woodcore, it has some of the best stability in the category, and grabbed some of the top scores for Carving Pleasure, with remarkable propensity to make long, perfectly arced turns. We recommend this ski for advanced to expert skiers who want a durable workhorse for the majority of lift-served conditions.

The new Atomic Vantage 90 TI earned a couple of 10s (out of a possible 10) in the Overall classification, and one 6 at the lower end, but received mostly 8s for its all-around performance in all but powder conditions. What the ski sacrifices in float, it more than makes up for in edge-hold and turn shape versatility. Other skis, like the Fischer Pro MTN 86 TI and Rossignol Experience 88 TI offer up a quicker, more lively feel underfoot, but the Vantage 90 TI has a damper, more connected to the snow feel.

Stability, on the other hand, was a classification in which most testers could agree. Earning several 10s for its power and hold, particularly at higher speeds, the ski did also grab a couple of 6s at the low end, from testers who felt the lighter weight made them a little less confident than on other skis. The median score here, however, is a solid 8, as one tester wrote, “It has a solid platform underfoot and operates cleanly at speed.”

Also at a premium, the Vantage offers incredible Edge Hold, with an even balance of contact and grip all the way through the turn. The ski earned top scores from every tester (from one 7 to the rest 8s and 9s) in this classification.

That being said, the Vantage also crushed it in the Carving classification. With only one score lower than an 8, the ski exhibited some of the finest handling, edge-hold, and arc-to-arc predictability for skis in this class, and as one tester wrote, “The Vantage is one of the purest carvers in the category.”

As mentioned in the intro above, this was the weakest classification for the Vantage 90 TI. The ski’s all-terrain performance is bolstered by the fact that along with the Volkl Kendo and Head Kore (with a 90mm waist and a 93mm waist, respectively) the 90mm waist of the Vantage is wider than any of the other skis in the category. It still feels more like a hard snow carving ski. Less rocker in the tip than last year’s Atomic offering for Frontside, and the lighter design with an emphasis on precision on power, make this a better ski hardpack/groomed conditions, and not for the softer snow days.

The Turn Shape Variability scores for the Vantage 90 TI fluctuated depending on what our testers wanted the ski to do. For hard chargers who wanted to get up to speed and make GS and Super G sized turns on harder snow—whether that included groomers, steeps, bumps, or trees—the ski earned high marks from our team. Testers who wanted to make quick turns, with effortless edge-changes in the fall-line or zipper quick foot steers in the moguls, skis like the Dynastar Legend 88 and Elan Ripstick are much easier to steer.