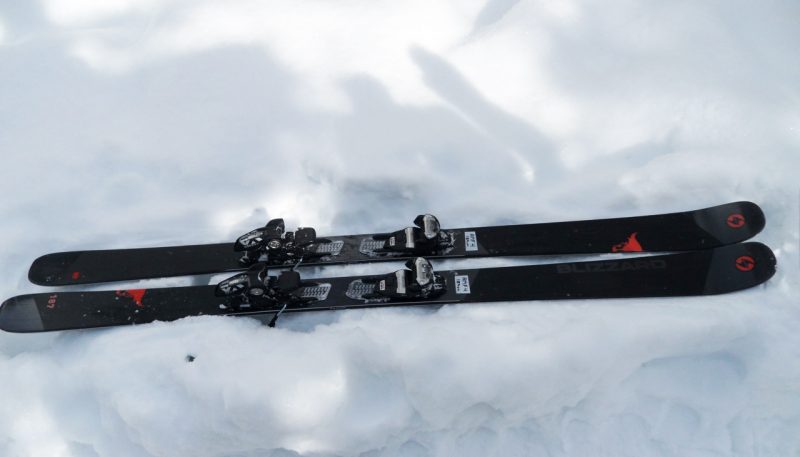 THE VERDICT
Blizzard’s Brahma has earned its place in the pantheon of great hard snow skis, with a penchant for arcing high speed, medium to long radius turns on groomers. It is easily one of the most stable skis in the Frontside Category, and one of the most thrilling skis for people who like to go very fast. The damp feel and great edge control invite you to keep turning up the heat on each arc. Slow down or go too deep off-piste, however, and that high level of performance gets a little harder to find. This is a ski that’s best for advanced to expert level carvers who have the skills to really drive a turn.
FULL REVIEW

Blizzard’s Flipcore Technology is in all likelihood the most recognized, successful application of rocker in the ski industry, offering an ease of turn initiation that makes it lots fun to start ripping long turns on very damp skis. That’s definitely the story with the Brahma, a hard snow destroying Frontside machine that some of our testers compared to a street legal race ski. It excels at medium to long radius turns at higher speeds (thanks to two layers of Titanal and a carbon frame on the core), and feels more confident the faster you go. It’s one of the most stable skis we tested in any category (another Blizzard hallmark), which—especially at high speeds—is awesome at building confidence.

The Brahma can feel sluggish and hard to steer for skiers who prefer a little less excitement and adrenaline in their groomed experience, and also in fresher or more cut-up snow conditions when you try to ski it off-piste. Tight turns and tight spaces also require a bit more of a platform technique, or even stepping from edge to edge, rather than just pressuring from outside ski to outside ski in a series of long, clean arcs. Buy this ski for fast, hard-charging days lapping groomed runs on either coast.

The Brahma got high scores across the board in the Overall classification, with nothing lower than an 8, several 9s and one 10. While the ski does not offer much in terms of Floatation (see below), it more than makes up for it with power and superior Stability.

Blizzard’s Flipcore Technology makes this ski easy to initiate and lean into a turn—especially once you get it up to speed—but that doesn’t make it a solid choice for anyone who reads “Float” as an indicator of a ski’s off-piste abilities. The ski felt planky and one-dimensional in softer/mixed snow, and also in shorter turns. Only one tester gave the Brahma a 10 (out of a possible 10) for Float, followed by a couple of 8s, then a majority of 6s and even 5s for this classification, which was the one place the ski did not stand out.

On the other hand, the combination of a full woodcore (Beech and Poplar), a carbon frame and two layers of Titanal mean this ski has stability to spare. The more you push the Brahma, the more assured it feels, especially on hard snow, where it feels damp as hell. In fact, the two key standouts of this ski’s best characteristics are its Stability and Edge Hold, where it excels. Comments here included: “It’s damp at speed and likes to go fast,” “Speed is your friend,” and, “The Brahma offers superior stability in a category where almost every ski is built to go fast.”

As noted above, in high speed, medium radius arcs, the Brahma maintains a constant, confident grip on the snow that is almost surreal. To have that much power underfoot, and with such a smooth GS turn radius, makes powering down a fresh groomed face feel like one of life’s greatest thrills (actually, that’s true). The only time that sensation can get a little short-circuited is if you go for too a tight a turn radius, and force the ski out of its natural feel. Testers said, “The Brahma has totally positive edge control,” “It’s a flat out speed machine but still quick edge to edge,” and, “It felt like a GS race ski, but with a little more forgiveness.”

The Brahma earns one of the Frontside Category’s highest scores for Carving Pleasure—and this in a category where a ski’s carving ability is at a premium. The mix of superior Stability and Edge Hold result in a ski where the Carving Pleasure is at the top of the class, particularly if you like making GS to Super G style turns at a high rate of speed. When you try to go slower, and break into tight slalom turns, is when the ski loses performance. As one tester so eloquently put it, “The Brahma offers the most joyful carving prowess.”

Make no mistake, “forgiveness” and “liveliness” are not two terms anyone will use in describing the Brahma, especially if they don’t have superior technical skills. Two testers did give the Brahma 10s for this classification, followed by several 8s, and then scores as low as a 5, and then five 6s. This ski is built for speed and power, and in those regards, it is built remarkably well.