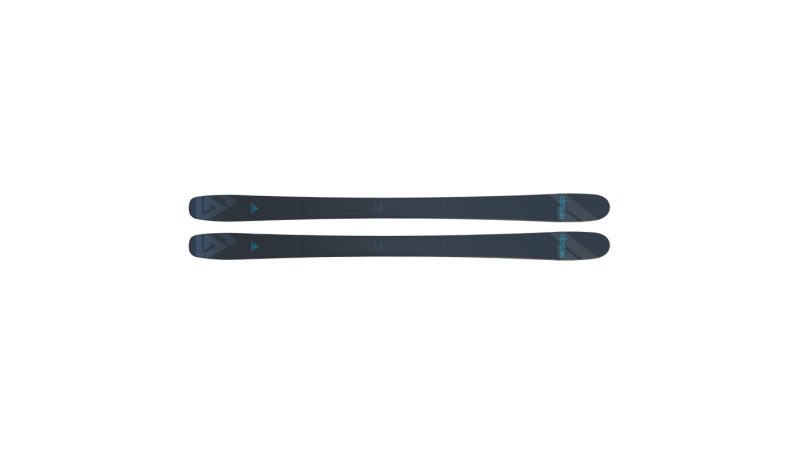 THE VERDICT
The DPS Cassiar A85 represents the next step in bringing the brand’s super light prepreg carbon fiber and aspen wood core construction into skis that perform in-bounds, on bumps and hardpack. The ski’s feathery feel makes it easy to initiate and maneuver in medium radius turns, especially on softer snow, where it was reliably predictable and felt balanced. At the same time, some testers felt it could be overpowered at higher speeds where it didn’t exude much liveliness, especially on early laps when the spring snow had frozen. This is a good Frontside pick for skiers who want a lightweight feel with easy maneuverability, and who aren’t looking to rocket on-piste.
FULL REVIEW

The Cassiar A85 features DPS’s innovative prepreg carbon fiber laminate construction, and the first thing you notice when you step into the bindings (even with bulkier demo bindings, which we use for every in-bounds ski test) is that these boards are exceptionally light. They are also wonderfully damp. The result is a ski that is easy to initiate and maneuver in medium radius turns, with a preference for getting off the groomers into the bumps and softer stuff. It’s a ski that is remarkably well-balanced, predictable and easy to initiate.

It is not a ski you are going to lay over into a deep carve at high speeds on the hardpack, where testers felt the ski could be overpowered and lose grip. The Cassiar A85 also has such an obvious preference for making medium radius turns without much effort, that you’ll find that’s about all you want to do with it. Overall, our team feels this is a ski that’s best suited for advanced skiers who love to make round turns straight down the fall-line and who will gladly pay for the much lighter weight.

The lightweight feel of the DPS Cassiar A85 makes it super maneuverable in softer snow, where it is easy to engage with a nice, predictable swingweight. This is really one of the strong suits of the ski, where it showcased its ability to make precise, medium radius turns on off-piste conditions for skiers who didn’t try to overpower it. This was one of the stronger showings for the A85, where the ski did earn two 10s (out of a possible 10) for this classification, as well as a handful of 8s, and then some 7s and 6s. “It’s very light and easy to maneuver,” one tester wrote.

That same lightweight feel, and predilection for round, medium radius turns with more steering than deep angulation, meant that the majority of our testers felt the ski was overpowered at higher speeds on the hardpack. It felt outclassed in the Frontside Category by the majority of other skis that earned higher ranks in this classification, but also at a heavier weight. One tester did score the A85 a 10 for Stability, followed by three 8s, and then several 6s and 5s, where one tester remarked, “At higher speeds it just feels too light.”

Edge Hold, on the other hand, appears to be a tale of two turns as far as the Cassiar is concerned. While it felt wonderfully accurate and easy to engage on softer snow, it did not exhibit that same finesse on the harder stuff. Testers tried to change up their style to accommodate the ski, with more foot steering and less hip angulation so as not to chatter or skid out, but ultimately wouldn’t spend a whole day – or season – altering their turn to enjoy it. The A85 did earn several 8s in this classification for how maneuverable it was in softer snow, followed by just as many 6s for testers who tried to go ripping on the groomers and wanted more grip.

As mentioned in the previous two classifications, the Cassiar carves beautifully for skiers who like to foot steer down the fall-line, through the trees and on the steeps in softer snow. Hard chargers will not appreciate it qualities as much.

The Cassiar can be coaxed into some short swing turns, particularly in steeper conditions, where its lightweight, easy handling, provides a nice mix of snap and grip. Skiers who are little defter in their soft edging touch can also master longer turns in smooth conditions. But making medium radius turns all over the mountain is where the Cassiar performs at its absolute best.