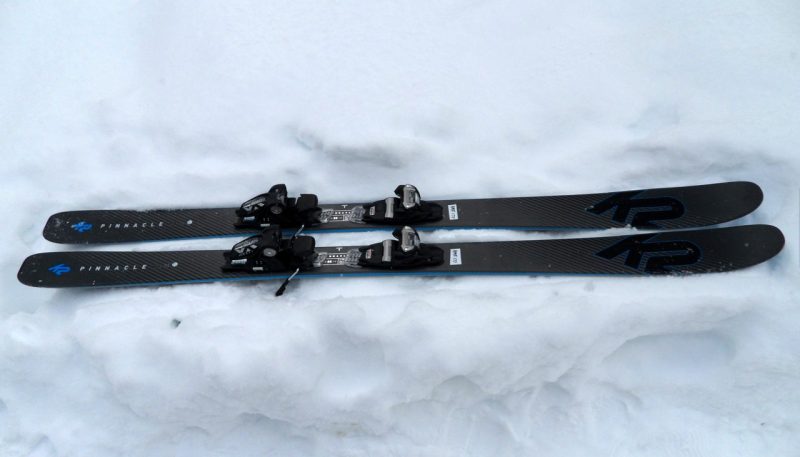 THE VERDICT
K2’s upgraded its Pinnacle 88 in the offseason, adding a stiffer wood core (spoiler alert, it’s a fir/aspen blend) as well as a layer of metal for more high-end performance, especially for bigger turns and higher speeds. It’s a fun ski, with a perfect amount of tip rocker for improving its performance off-piste. It does not excel at short turns, and our race style skiers felt it’s more for recreationalists than for anyone who is addicted to getting their carve on. Turn initiation and fun are still at a premium. This is one cool ski.
FULL REVIEW

The K2 Pinnacle 88Ti has been working out, adding a more aggressive woodcore featuring a mix of fir and aspen for power and flex, and a layer of metal (thus the ‘Ti’) for stability and hold. As a ski that we praised last year for its ease of initiation and oversized fun factor, the 88 now features more control and stability at higher speeds, and a more aggressive, charge the fall-line feel. The All Terrain Rocker and tapered tip for deeper contact points—adding that extra edge contact just when you really bite into a turn—remain unchanged, and continue to contribute to this being one of the easiest skiing Frontside models we’ve tested in the past two years.

A few of our East Coast/race bred-testers still felt the ski is not on a hard-carving par with the Blizzard Brahma or Nordica. Most testers agreed this is much-improved ski, adding a welcome layer of Edge-hold and Carving Pleasure to an already very easy turning ski.

The Overall classification saw the K2 Pinnacle 88Ti earn several 8s and 7s at the higher end, as well as a couple of 6s from testers who wanted more of a pure frontside performance. Overall, this is a much improved ski.

Float was one the best features of the K2 Pinnacle 88Ti, and in the entire Frontside Category. K2’s All-Terrain Rocker design makes it super easy to initiate the ski, especially in off-piste terrain. Along with a couple 6s (out of a possible 10) at the lower end of the ski’s scores for Floatation, the K2 received a majority of 7s and 8s, and even a single 10 from one of our East Coast-based hard chargers, who said, “It’s brainless how easy this ski is to initiate.”

Stability was much improved on this ski thanks to the beefier core along with the layer of metal. The majority of testers gave it a 7, while it also earned two 6s on the lower end, and on the higher end, a couple of 8s.

The Pinnacle 88Ti earned the exact same scores for Edge-hold. This ski does perform better in softer snow conditions, but more than “held” its own on groomers and harder snow as well.

The Pinnacle 88Ti is not as pure a Frontside carver as many of the other skis in this category. It can arc on the groomed easily thanks to the aforementioned improvements to its stability and hold, as well as the pronounced tip rocker, but it excels as more of an All-Mountain ride for bumps and trees.

The upgraded Pinnacle 88Ti still prefers turns in the short to medium radius variety, but now works them with a significant upgrade in power and control.