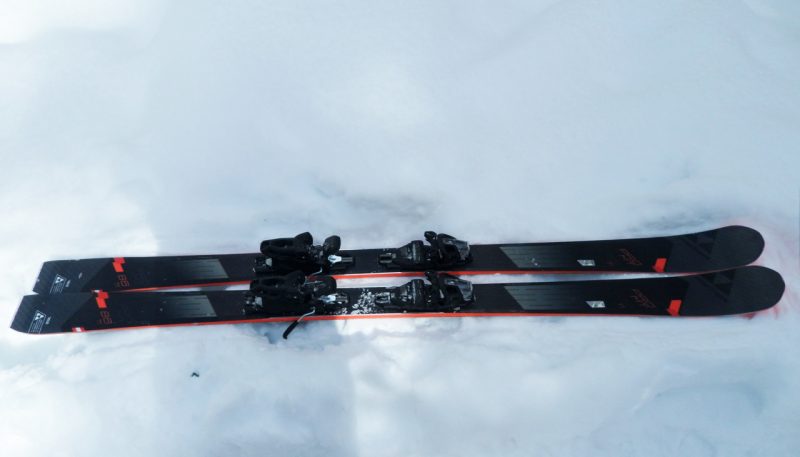 THE VERDICT
Even with its ease of initiation and forgiving flex, the Fischer Pro Mtn 86 Ti is a very exciting ski. It handles well in all on-piste, hard snow situations while still providing a thrilling sense of absolute control at higher speeds. The ski transitions seamlessly from edge-to-edge in a variety of turn shapes, and has remarkable grip. A few testers did report over-powering the ski while mach-ing flat out, and it’s not the best ski here for off-piste, especially in terms of Floatation, but the lightweight feel and easy-to-access performance put it right up there for consideration at the top of the Frontside Category for all season use.
FULL REVIEW

There’s a lot of cool technology coming together in the Fischer Pro Mtn 86 Ti. The Air Tec Ti laminate construction gives it great torsional rigidity while remaining remarkably light, and Fischer’s All Mountain Rocker and the 12 K Carbon Fiber tip and tail enhance turn initiation with power and confidence. Several testers were so impressed with the edge-hold, stability, versatility, and super smooth transition power of the ski on all hardpack conditions that they put it at or near the top of the class.

Once off-piste, some testers said the ski did not feel as confident, and said they needed to dial in their technique—especially weighting and steering the ski earlier in the turn—to keep it on track. Those same testers felt they lost some confidence going flat out on the hardpack. The majority of people who got on the ski, however, said this would be one of their go-to picks for lift-serve skiing whether they were in California, Colorado, or Vermont. If you haven’t skied a Fischer in awhile, the Pro Mtn 86 Ti (and any ski in the Pro Mtn line) is a great reason to go back.

The Pro Mtn is a very exciting ski that will thrill Frontside skiers with its power, easy arcing Edge-hold, and ability to stay stable and confident in a wide variety of packed snow situations. What it lacks in Floatation (see below), it makes up for with its Stability, Carving Pleasure, and Turn Shape Variability.

While Float is not a strong suit for most of the skis in the Frontside Category, a lack of ability to adjust to off-piste snow might have kept the Pro Mtn 86 Ti from taking top honors in the Frontside Category. After slicing and dicing on hard snow—and in hardpack bumps—once we took it into truly mixed snow conditions, the stiffness and lack of pronounced rocker made it feel a little flat. The ski did grab a couple of 8s (out of a possible 10) in this classification, all the way down a handful of 4s, with the majority of our testers giving it a solid 6.

The lightweight feel of this ski might have you wondering about its stability once you clamp in, but two turns later you will have no doubt that it can maintain a consistently confident feel with minimal vibrations underfoot. The Air Tec Ti Laminate construction and Carbon Tip and Tail give it all the power it needs—especially in the wonderful progressive flex of the shovel which powers into a turn the moment you start to drive it—while dumping weight and material where it doesn’t. This is the epitome of Frontside strength that is easy to access. The ski did earn a couple of 10s in this classification, as well as some 6s from testers who thought it lost performance off-piste, with a solid average of 8.

Those same construction capabilities result in excellent grip on prepared snow and frozen hardpack, which is that much more exciting to enjoy at the lighter weight. With the Fischer Pro Mtn 86Ti, you got all the hold without the workout required for some of the beefier skis—like the Head Monster 88 or Blizzard Brahma—in this class. This classification was one of the strong suits for the 86Ti, with many testers offering comments like, “It’s fast edge-to-edge, with great energy and grip,” and, “It’s so easy to roll edge-to-edge.”

Slalom and GS turns are a joy on this ski. Even if you’re one of those skiers who likes to straightline a shallow pitch, on this ski the turn initiation is so automatic you won’t be able to resist leaning into arc after satisfying arc. As noted, it can get pushed around a little bit off-piste, and testers who tried to push it into especially fast, longer turns on the hardpack said they would probably size up a length. The overall ratings in this classification included several 10s, 9s and 8s, and only one score of 6. “It’s a very responsive carver,” one tester wrote.

It’s a wonder that Fischer fit so much stability and grip with energy and ease of use. This ski’s construction could have significant impact on the Frontside and All Mountain category in the future, continuing to create high performance skis at a lighter weight. It does prefer short to mid-radius turns, but at almost no speed limit. In the final scores, the ski did receive two 6s for its sight loss of performance in the biggest turns, and off-piste, but its overall energy and ease of initiation in medium to small radius turns resulted in the majority of scores being 10s, 9s, and 8s.