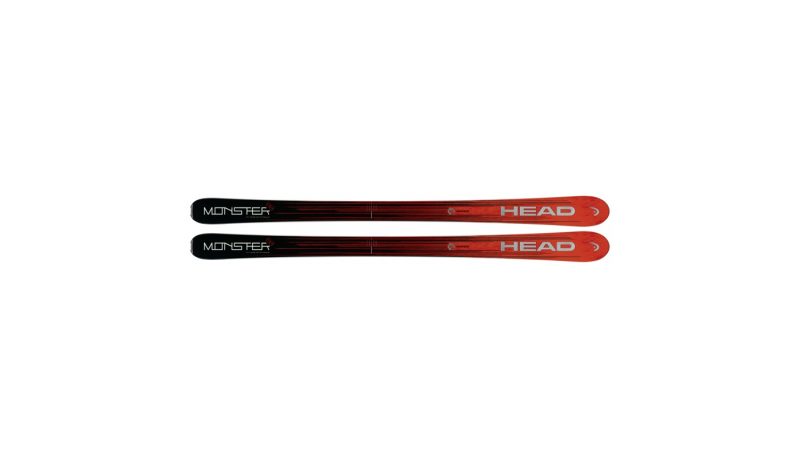 THE VERDICT
Head’s Monster 88 wowed testers with its power and stability, with many calling it out as the most stable ski in the Frontside Category, if not in the entire test. This is a ski that rewards people who push it, especially at faster speeds, where it also exhibits some of the most bomber edge-hold in the entire class. It’s a lot of ski to ride all day or even all season. It will overwhelm anyone looking for a more poppy, lively feel, and especially anyone who isn’t an expert and looking for a ski to help them progress. For aggressive skiers who want to sink into each arc with authority, this is a great bet.
FULL REVIEW

When describing the power and stability of the Head Monster 88, a couple testers went so far as to add a few exclamation marks. The hardest chargers in our team were the most impressed by the authority with which this ski laid down fast, deep arcs. A mix of Head’s Graphene WC Sandwich Cap Construction with Titanal, the Monster 88 feels very much like a muscled up race ski that just wants to rocket from the top straight to the bottom of each lift.

Head’s Allride Rocker is in the tip and tail for easier turn initiation and exit, although like many skis in the Frontside Category, unless you like to make GS-wide carves in the moguls and steeps, the Monster 88 still functions better on-piste than off. It’s likely too much ski for advanced intermediates looking for a little forgiveness to boost their improvement, or for anyone who doesn’t love going fast. It’s also not the “poppiest,” liveliest ski in this class (like the Dynastar Legend X 84 or Fischer Pro Mtn Ti 86). It is an absolute charger for advanced, dynamic skiers, who like to express their skills with powerful arcs.

Yes, the Head Monster 88 features the brand’s proprietary Allride Rocker, but that doesn’t mean it really has Float. While the rocker does make this ski easier to initiate in a wide variety of conditions – particularly when you are going fast – it is still a bull in off-piste snow, where if you aren’t charging, you’re not going to really reap the rewards of carving on such a damp, powerful machine like this. The highest score any of our testers gave the Monster 88 for Float was a 7 (out of a possible 10), while it also garnered a couple 4s on the low end and in this classification, averaged a 6.

The mix of Titanal and Head’s World Cup Sandwich Cap Construction (remember, two of the top U.S. ski racers ever – Ted Ligety and Lindsey Vonn – will be arcing their Head Skis into the Olympics) help create a ski with some of the highest marks for Stability in the Frontside Category. The addition of piezoelectric intellifibers in the shovel make for a perfect dampening mechanism, ironing out the abruptness of any inconsistencies in the snow and turning each ride into a hyper-smooth drive down a sheet of smooth white pavement. Only one of our testers gave the ski a score of 6, saying it was so stable it felt “glued to the snow,” while another gave it an 8, and everyone else gave the Monster 88 perfect 10s for being one of the three most stable skis (along with the Blizzard Brahma and Kastle MX 89) in the class.

The Edge Hold also garners near the top of the category – albeit not perfect – results. The power of this ski is such that it has to be constantly driven to perform, and can feel a little dull or slightly unresponsive to anyone who isn’t willing to go all out. Shorten a turn up too much, or ease of the gas, and you will miss out on the awesome sense of engagement that comes when you really let the Monsters rip. As one tester wrote, “If you’re not a strong skier who wants to drive these boards all day, they will wear you out. But at speed, the Monster 88’s edge hold is almost unmatched.”

The same can be said for Carving Pleasure, where reaping the highest reward of skiing a high-end Frontside ski like the Monster 88, is achieved by skilled, technical skiers who can apply a more authoritative touch. Unlike the DPS Cassiar, which is best skied by stand-up style skiers who like to foot steer, the Monster absolutely needs to be driven from start to finish.

Precise, solid, and seriously thrilling at moderately high to fast GS and long-range arcs, the Monster fits its name perfectly. It’s not for skiers who want to make slalom turns, and as in Float, this is one classification where the Monster 88 was not near the top of the Frontside Category. It did receive two 10s and a 9 from our hardest charging testers, with one tester giving it a 4, and the rest averaging 7s and 8s. We recommended the Monster 88 for aggressive skiers who know how to enjoy their skills and want the kind of ski to help show those skills off.