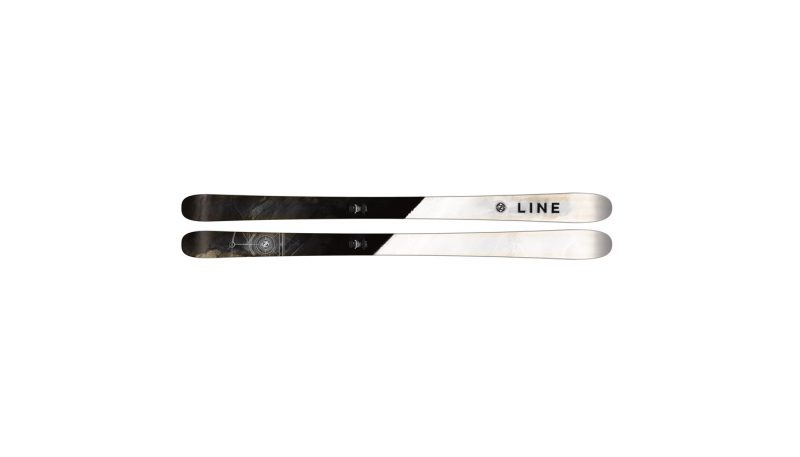 THE VERDICT
There’s a whole stack of test cards rating Line’ Supernatural 92 “Good” to “Excellent,” with one hard-charging New Englander claiming it as his “favorite.” The uber-damp feel of the ski make it easy to steer with lots of solid edge grip, even on the one morning when everyone was dreading the refrozen slush. The ski is especially enjoyable when it’s making big, wide open turns on hardpack, where it is at its best. The Supernatural 92 is not a lively ski, with a lot of energy and pop underfoot, and a few testers felt it lost some handling at high speeds off-piste. It is another entry in the “Power Portion” of the Frontside Category, along with the Head Monster 88 and Kastle MX89 with great firm snow performance. Everyone said they’d ski it again, especially on hardpack.
FULL REVIEW

All of our testers had good things to say about the Line Supernatural 92 this year. The mix of early rise in the tip, sidewall construction with maple and aspen stringers and metal laminate all combine for a ski that is super damp while remaining easy to initiate and steer. So damp that it even handled well on one of the worst refrozen slush mornings we’ve ever had for a test, when the groomers were so reefed out there was some talk of another cup of coffee, or even an early trip to the bar. In those uninspiring conditions, the Supernatural 92 turned a lot of heads with how well it held an edge and how that aforementioned dampness boosted our graybird day confidence.

Off-piste, the ski lost some of that ease of initiation, especially at higher speeds. It felt like that same vaunted dampness chattered in the mixed conditions, where we might have preferred a livelier ski. Turn shape is also an issue if you like to make short, quick turns. The ski can feel planky in that regard, constantly coaxing testers back to its obvious sweet spot, a big wide arc on the hardpack and groomed – right where the Supernatural 92 excels.

The Line Supernatural 92’s early rise (rocker) in the tip makes it easy to initiate on hard snow conditions. But the ski’s dampness – which is near the top of the Frontside Category – made it feel less lively and more like a crud destroyer than a windpack walker in off-piste conditions where you want Float the most. Depending on how much you want to rely on this ski for true all-condition Frontside use, be prepared to put a little more power behind your turn when the inches add up. The one East Coast-bred tester who name the Supernatural 92 his favorite, gave the ski a 10 (out of a possible 10) here, while remarking on its power and Stability in the same sentence. It also earned a couple 8s, but the majority of Float scores were 7s and 6s.

That same maple core and metal laminate-enhanced dampness mean this ski provides consistent Stability and snow contact throughout a turn. Like the Head Monster 88, this is a Cadillac of a board, with the kind of power underfoot that will make you want to charge whatever’s below you, instead of being one of those perfect conditions cherry-pickers who keeps working the traverse. As noted in the Full Review, this ski shone when the hardpack was at its refrozen worst. The ski earned three 10s in this classification, along with some 6s for testers who weren’t as thrilled with the ski off-piste, with the majority awarding the Supernatural 92 a solid 8.

Like several other skis in the Frontside Category, such as the Liberty Origin 90 or Kastle MX89, the Supernatural 92 lost some points in the Edge Hold classification when testers made it do something it doesn’t like to do – namely, make turns that are quick and short. Keep your carve at the ski’s average 20 m radius for the best results, meaning the more GS style turns you like to make, the more you will appreciate the Supernatural’s stability and hold. Interestingly, especially in light of the ski’s superior Stability, it only earned on 10 here, several 6s (again in reference to how it lost performance in more mixed conditions), and a couple of 8s.

The same applies to Carving Pleasure – you lose pleasure the more you push the ski out of its comfort zone. Its ease of initiation certainly improves the ability with which you enter any turn, especially on hardpack, but with the stiffer flex you also have to be patient enough to ride that turn through its full arc. There were a couple 9s and 10s awarded here, followed by three 6s, and several scores of 7 and 8.

All of which leads to the fact that the Supernatural 92 earned its most varied results for its Turn Shape Variability. Every tester was impressed with the ski’s ability to make a mid-radius turn on typical Frontside conditions, and make that turn exceedingly well, but there were mixed reviews on how well that turn held up at higher speeds, especially off-piste. The fact that the ski almost single-handedly carried us through one of the worst mornings of refrozen funk we’ve ever tested in is more than enough to vouch for its hard snow performance.