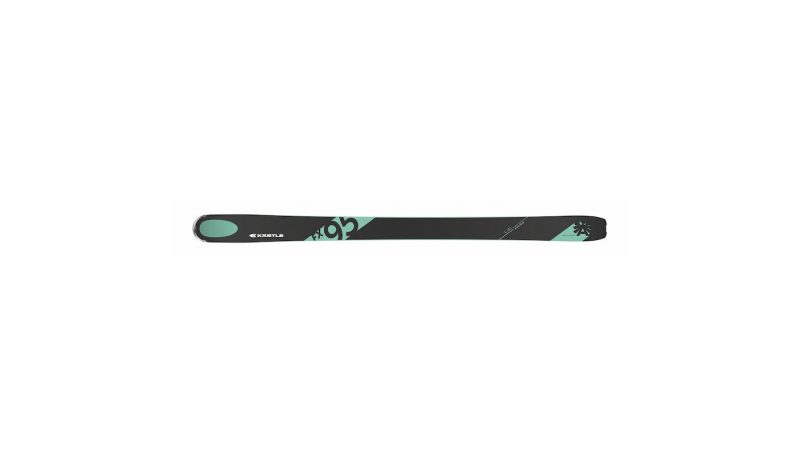 THE VERDICT
When more than 35 percent of your test team says a ski is their “Favorite,” and the rest rate it “Excellent,” it’s pretty clear you’ve found a pair of boards that truly stand apart. Which is exactly what happened with Kastle’s FX95 HP, which pulled away from the rest of the class. The secret is in matching Kastle’s typically bomber full woodcore sandwich sidewall construction and two layers of Titanal with “Dual Rise” rocker in the tail and the tip. Suddenly, a ski with already impressive edge hold and stability is able to also offer ease of initiation both on-piste and off. Make no mistake, this is an experts-only ski, that needs to be moving at a decent clip for all its features to click. It also doesn’t do short turns as well as the Volkl 90Eight, and a couple testers would have preferred a touch more sidecut. Still, we rarely have this many testers agree on which boards they think earn the Best in Class.
FULL REVIEW

The Kastle FX95 HP managed to stand out in an All Mountain category absolutely packed with great skis that our testers would be happy to ride for the entire season, especially when making powerful, medium radius arcs. What set the FX95 HP apart was how it made everything except a tight slalom turn with power and finesse. By mixing Dual Rise technology with a super smooth turn-producing full woodcore, sandwich sidewall and two layers of Titanal construction, Kastle created a ski that carves with an exciting air of authority both on the groomed and off-piste. “The ski is precise, has great edge hold and handling, and carves everywhere. It destroyed the slop,” one tester wrote. Most importantly in terms of pure rankings, more than 35 percent of our test team ranked the ski as their “Favorite.” The rest rated the FX95 HP as “Excellent.” With such a mixed test team, from a wide variety of alpine locales, even our Best in Class skis typically get a least a couple “Good” ratings on the low end. Not so in the case of the FX95 HP. It’s a ski that thrilled everyone, whether they were slashing through crud, or ripping hardpack.

To be clear, this is not a ski that is going to suddenly elevate an intermediate skier into an expert. It is a ski that needs to be skied aggressively for it to perform at its best. It also doesn’t make slalom turns without being forced. And some of our testers said they would’ve liked to see how it might have skied with a little more sidecut. To that end, the FX95 HP did get a couple 6s (out of a possible 10) for Responsiveness. But it more than earned top scores for everything else.

The Kastle FX95 HP got top Overall scores across the board, with several 10s (out of a possible 10), some 9s, and at the lowest, several 8s. All of our testers were impressed with how well the ski performed both on and off-piste, and without having to alter their style or turn shape. As on tester said, “The ski is stable, it seamlessly initiates turns, and really damp.” Another tester, who gave the ski an “Excellent rating,” said, “It’s a great all around ski for 90 percent of the terrain.” This is a ski that will satisfy technical skiers, GS-style aficionados, and even strong foot-steering stand-up skiers who want a perfect mix of power and finesse.

The only real ‘average’ ratings for the Kastle FX95 HP were for Responsiveness, with a few 6s at the low end for how skiers need to get this ski up to speed to unlock its awesome performance. On the other hand, for harder edging skiers who like to travel at higher speed, the ski did earn several 10s in the same category, as well as some strong 9s and 8s. That extra bit of tip rocker is key to making this a smooth, precise turning ski in all conditions, with the ability to ski the entire mountain whether there’s now snow, cut up crud, or even hardpack. As mentioned in the Full Review, the faster you go the better this ski performs, with an ever-increasing level of Responsiveness. As one tester said, “The rocker works. It’s so easy to initiate.”

Stability ratings for the Kastle FX95 HP were pretty much through the roof. All but four of our total test team gave the ski a 10 for Stability, with those four all giving the ski an 8. “Stable at high speed,” “Ultra damp,” “Clean ski to snow contact,” and “Solid, confident platform,” were just a few of the tester comments. It’s a ski that everyone on the team would’ve kept riding all season if given the chance.

Despite the ease of initiation provided by the early rise in the tip, only one tester gave the FX95 HP a 10 for Resort Float. The rest of the scores ranged from a handful of 8s to a few 7s and even two 6s. As one tester said, “The early rise allows for quicker turns when you need them and good – not great – float.” The ski is no porpoise, but it certainly can arc into a nice steadying plow in whatever kind of slop, windblown conditions or light powder you find off-piste.

The FX95 HP earned solid 10s and 8s for how the ski holds an edge – and also for what a pleasure it is to lay over into an authoritative, fine-tuned arc. The mix of dual rise, sandwich sidewalls, low camber design for a closer to the snow profile, and two layers of Titanal, all combine to provide some of the smoothest, best edge hold in the entire All Mountain Category.