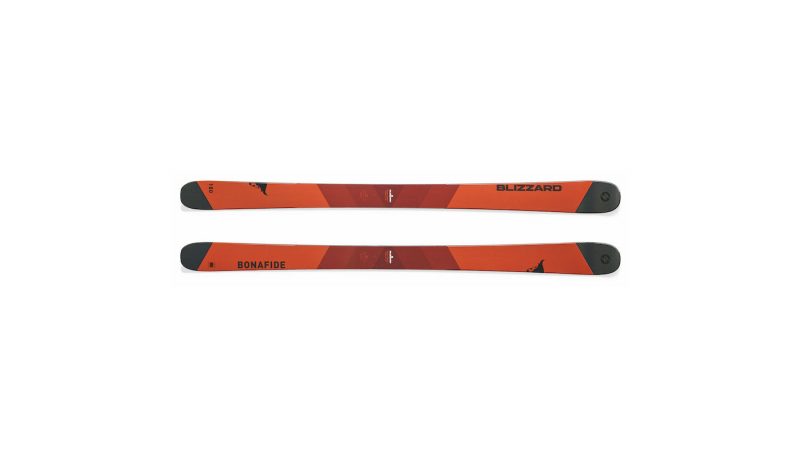 THE VERDICT
Blizzard did some interesting tweaks to its well-regarded Bonafide in the offseason, most notably widening the tip and tail to improve its carving ability with a deeper sidecut. The result is an All Mountain ski that still blows through the crud but also holds an even better edge on the hardpack. This is not a ski that likes to go slow or has much pop, but it offers thrilling all-terrain performance with unshakeable hold and very smooth ski-to-snow contact underfoot.
FULL REVIEW

Blizzard’s Bonafide has consistently been a top ranked ski in the All Mountain category of our ski test, with a damp, powerful feel that makes it surprisingly easy to arc authoritative turns both on and off-piste. This season, the hardpack performance gets a noticeable upgrade due to a deeper sidecut as the result of the brand widening the ski’s tail and tip. At the same time, the Flipcore Carbon Rocker in the shovel was slightly reduced to give the ski earlier, more consistent ski-to-snow contact. The result is a hard-charging ski that can still blast through anything but now has a tighter, more fine-tuned turn radius, albeit with a bit less off-piste float.

The Bonafide still needs to be skied at higher speeds for skiers to appreciate its top-end performance, and is also still a ski that sacrifices some liveliness and playfulness in favor of dampness and a remarkably smooth feel underfoot. GS-style skiers will find it’s a pleasure to ski in almost any All Mountain conditions, with a predictable, confident medium radius turn shape. The Bonafide’s impeccable edge hold and rock solid Stability encouraged our testers to continue pushing the ski harder and faster, particularly on the hardpack, where they might still be trying to see if this big terrain bruiser has any kind of speed limit. The ski is a perfect choice for skiers on either coast – or anywhere in between – for anyone who likes to ski hard and fast.

Blizzard’s Bonafide grabbed top marks across the board in the Overall classification of our All Mountain test, mainly because the majority of our testers could envision an entire season on a ski like this. The power and confidence of this ski, and most specifically its wonderfully smooth feeling in on- and off-piste conditions, will appeal to a lot of skiers who want an exciting GS-style ski for everyday use. The tighter sidecut also means the Bonafide will handle the hill hardening up between storm cycles so that you’ll be less tempted to throw a pair of Frontside skis on the roof.

The Bonafide is very responsive, provided you’re willing to get the ski up to speed where its powerful edge hold and superior Stability become apparent. Ski this board slow, and it feels heavy and sluggish. The slightly modified tip rocker – which was reduced – results in earlier initiation when you pressure and steer the shovel, and also more consistent ski-to-snow contact. The dampness of the ski, enhanced by two layers of Titanal and a poplar/beech woodcore, creates more hold than energy and pop, which still resulted in the Bonafide getting high marks for responsiveness.

The Titanal laminates, the even flex of the poplar/beech woodcore, as well as Carbon Flipcore Technology and bi-directional carbon in the tip and tail result in a ski that earned some of the top ratings for stability in the All Mountain category. Simply put, you may never experience another ski with as much stability as the Bonafide, or with a smoother, more confident edge hold as this.

The Bonafide does rely more on power and Stability than it does on Resort Float. No matter how slight, the reduced amount of tip rocker did impact how well the ski porpoises through mixed conditions off-piste. Most skiers won’t care, however, because the ski is so adept at blasting through powder and mank. The superior stability also encouraged testers to continue to drive the ski in mixed snow, when a lighter ski with more float might have encouraged them to stand straight up.

Great edge hold and top level stability, along with the deeper sidecut and earlier shovel-to-snow contact make for a ski that is positively Carve-O-Matic. The Bonafide also got top scores for its super smooth carving feel in medium to long-radius turns whether it was on- or off-piste. This ski carves as well or better than any other ski in the All Mountain category.