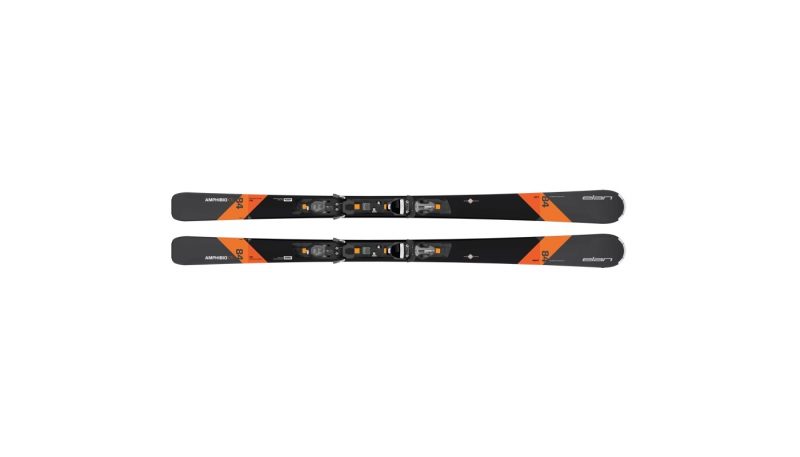 THE VERDICT
Elan’s 84 XTi features the brand’s Amphibio Technology, with dedicated left and right skis. Amphibio has more camber on the inside edge and rocker on the outside edge of each ski, creating really smooth turn initiation that rolls into a short to medium radius arc with a smooth, buttery feel. Testers found this ski incredibly responsive and versatile on Frontside conditions at all but the longest turns and highest speeds. It doesn’t have as much Flotation as some of the other skis in the category, like the K2 Pinnacle 88 or Line Supernatural 92, and on the flipside, also lost some performance on hardpack. Its overall responsiveness and constant ski-to-snow contact does make it a wonderfully damp ski with the kind of strong edge hold a wide variety of advanced and expert skiers will appreciate.
FULL REVIEW

Here’s how Elan explains Amphibio, the technology at the heart of the 84 XTi, “The Amphibio profile is a revolutionary ski design that integrates both rocker and camber profiles into dedicated left and right skis. Amphibio skis feature a cambered inside edge assuring precision, edge grip, and stability while a rockered outside edge provides forgiveness, turning ease and smooth transitions.”

Our testers wholeheartedly agree. They found this ski super smooth and easy to initiate, responsive, and able to quickly shift into a variety of turn shapes. This ski is quick edge-to-edge, stable, with great grip throughout the turn. It’s a confidence builder that is really fun to ride. The only place a few hard chargers found a hiccup was with a lack of float in windblown powder and cut up crud, and also at longer turns at high speeds on the hardpack. Basically, the ski loves to make great round turns on the kind of smoother snow conditions where most Frontside skiers will tend to ski it. We recommend the 84 XTi for advanced to expert skiers who want sports car performance and comfort out of their Frontside ride.

Float is one of the few places the Elan 84 XTi did not score well. This is a true Frontside ski without enough rocker or a soft enough flex to add a significant difference in softer, off-piste snow. It does initiate very easily – precisely because of the Amphibio design – but with full edge contact does not deflect cut-up snow. The ski did earn a few 7s (out of a possible 10) at the higher end in this classification, but it didn’t really stand up compared to other skis in this category. It’s a smooth turner made less for porpoising and more for making a buttery smooth arc.

Stability is a virtue of this ski, because the Amphibio design creates such constant contact with the snow. It has a quick, meticulous swingweight that almost acts like a metronome pacing out the time and distance between each turn. Real confidence builder in terms of how well this ski interacts with smooth snow in a way that makes you want to keep grabbing another chair. The ski earned two 10s in this classification, several 7s, and three 6s from the same testers who thought it lost performance at higher speeds on the hardpack.

Also a virtue, the Edge Hold and ease of turn initiation is really at the heart of the Amphibio design (see Full Review above) with a mix of camber and rocker that makes it effortless to move to the new edge earlier and earlier in the turn. The 84 XTi earned several 10s and 9s in this classification and nothing lower than an 8.

This ski rewards carvers who love to feel their edges throughout the turn, starting early as they steer and pressure the shovel, and riding that sensation all the way through the tail. The fact that it is one of the top Carving scores in the Frontside Category is a testament to how well these skis slice through the hard snow. Along with its awesome Edge Hold, the 84 XTi earned several 10s and 9s in this classification and five scores of 8. If you like to carve, this ski will make you love it.

The Amphibio does prefer short swing to medium radius turns, at which it excels. When testers tried to crank it up to Super G size arcs, the ski felt out of its comfort zone. The Turn Shape Variability does not encompass people who want to treat each groomed run like a Downhill Race, but we don’t think the majority of people who will love this ski on a daily basis will really care.