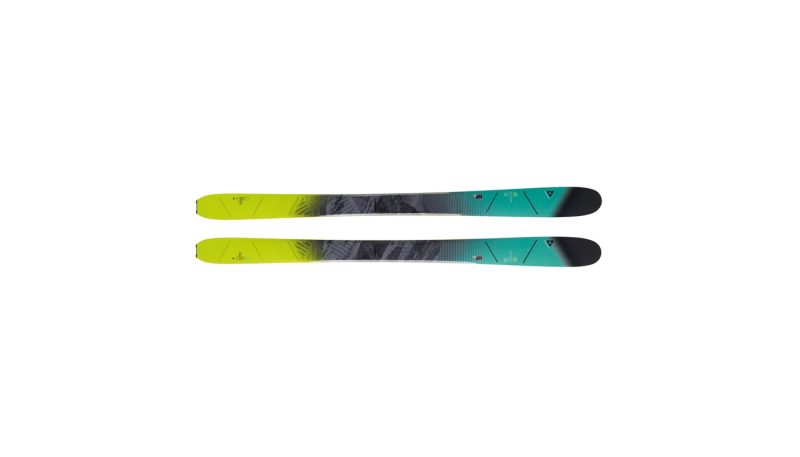 THE VERDICT
The Fischer My Ranger 98 is a light ski with traditional edge hold, a serious demeanor and a turn radius akin to a fat GS ski. Testers liked the edge grip, the responsiveness and acuity at speed. On the other hand, the 98-mm-waisted ski felt sluggish in short turns and lacked forgiveness. Testers recommend the ski for skiers who appreciate a traditional feeling ski with full edge grip tip to tail.
FULL REVIEW

A carving ski in a midfat body, the Fischer My Ranger 98 has a traditional feel with solid edge hold and a serious demeanor to boot. It also has a lightweight construction thanks to Fischer’s Air Tec Ti, which includes a layer of aerospace-grade carbon, plus a carbon inlay located in the thinned-out shovel.

Testers gave high scores for Responsiveness, singling out the edge grip and acuity at speed. Conversely, testers felt that the 98-mm-waisted ski felt sluggish in short turns and lacked forgiveness. One testers suggested the ski for skiers who appreciate feeling full edge grip tip to tail, while another tester recommended it to “East Coasters looking for a wider, carving ski and Western skiers who favor some oomph underfoot.” Opinions varied on the My Ranger 98. Scores ranged from high to average for Stability, Resort Float and Carving. Comments ranged with the scores, from “Stomp on it on boiler plate and the edges are there for you unconditionally” to “I wanted more meat underfoot since the lightweight construction felt too light for speed” as well as “Responsive and versatile” to “Not very playful, but will get you down with confidence.”

One reason for fluctuating tester scores comes from the ski’s design: According to Fischer, the My Ranger is a light freeride ski for climbing and downhill skiing. Several main elements are designed to save weight without sacrificing torsional rigidity including Air Tec Ti, which includes a layer of aerospace-grade carbon as well as strategic cutouts of material to reduce weight. The Carbon Nose adds a carbon inlay in the thin shovel. Downhill performance is enhanced with classic ABS sandwich sidewall construction, a poplar wood core and a flat tail. Air Tec Ti also adds a layer of dampening titanium. Therefore, the ski feels “directional,” (it can easily find the fall line) and has elements like responsiveness and solid edge grip, where the flat tail exits well out of the turn. It can also pivot and float decently, thanks the lightweight, rockered tip and 98-mm waist. However, Testers felt that the damp feeling took away excitement while entering and exiting the turn and that the ski was less forgiving for lower intermediate skiers.

Testers gave high scores for Responsiveness for the My Ranger 98. “It’s quick edge-to-edge and favors speed and GS turns,” said one tester. The directional feel is enhanced by a traditional sandwich sidewall construction and flat tail. Fischer also added a forward binding mounting position, which helps some skiers feel more stability and responsiveness from the front of the ski.

On the whole, the Fischer My Ranger 98 received average scores for Stability. Tester scores were not consistent here and included some top scores as well as average ones. One tester felt tip flap from the Carbon Nose tip, which has a slim profile and a carbon inlay. Another tester felt that the lightweight construction lacked “meat underfoot” at speed, while another tester felt “unconditional edges” even on boilerplate conditions.

Resort Float scores echoed those for Stability; ranging from high scores to average ones. Overall, testers felt that the My Ranger 98 was suitable for light powder but not full-blown blower pow.

On the whole, the Fischer My Ranger 98 is versatile in terms of being proficient around the mountain. It specializes in carving, favors speed and GS turns and is quick edge-to-edge. It’s able ski looser in tight terrain areas, but this hybrid freeride/frontside performance ski is heavier on the performance side.

There’s a range of scores for the Carving category, though most testers agree that the My Ranger 98 has good edge grip and favors GS turns. The ski has a 17 m turn radius and felt sluggish in short swing turns. All in all, tester comments on carving are summed up by one remark: “Stomp it on boiler plate and the edges will be there for you.”

Continue Reading
WHERE TO BUY
MSRP
$649.00
BEST DEAL
$389.95
*Your purchase helps to support the work of Gear Institute.
HOW WE TESTED