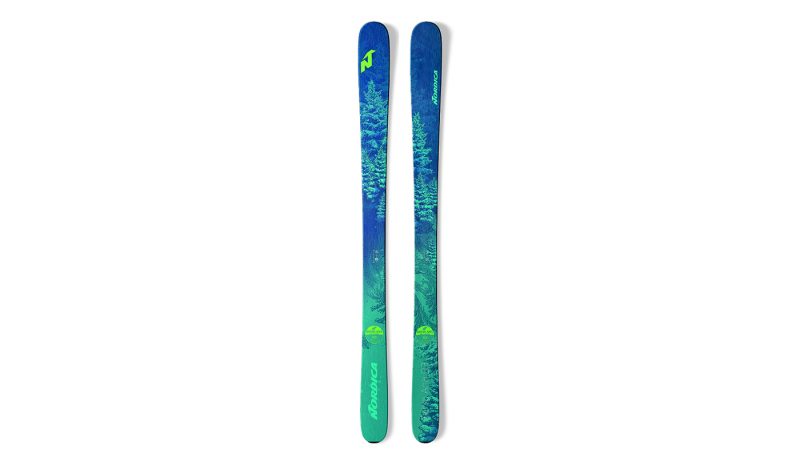 THE VERDICT
Command the Santa Ana 93 and it will give back. The 93-mm-waisted ski is an advanced skier’s cruiser ski, favoring GS turns and offering stability in variable snow. If skied aggressively, the straight-ish ski will roll on edge and offer stability and edge-hold. However, ski tentatively, and the ski feels damp and heavy underfoot, with slight tip chatter. All in all, the ski favors medium to long turns and suits an aggressive skier seeking a strong all-mountain ski.
FULL REVIEW

A cruiser favoring medium to long turns, the Nordica Santa Ana 93 suits an aggressive skier seeking a strong all-mountain ski. “Once you get it on edge, this ski provides good edge grip and stability underfoot,” says one tester. The Santa Ana 93 received its highest tester scores for Carving Pleasure, Edge-hold and Stability and lower scores for Resort Float and Turn Shape Variability. “This ski feels damp and heavy in the shovel,” says one tester. “It’s stiff and the straight-ish sidecut can make the ski feel sluggish to get up on edge.”

At 93 mm underfoot, the Santa Ana 93 is the narrowest in the All-mountain Freeski Santa Ana collection (including the 100 and 110). It’s designed for versatility—damp and stable, more directional than playful, however, combining maneuverability with a freeski-oriented rocker profile. “The ski will butter and feather, but it chatters a little,” says one tester. “It skis more like a 75-mm-waisted ski than 93 mm in terms of edge bite and precision on edge.” The turn radius for the Santa Ana 93 is 15.5 m (at 169 cm) with a less than shapely side cut (124-93-112). Most testers agreed that the ski favors aggressive, all-mountain skiers who are looking for a long-turn cruiser that can combat cut-up snow.

Nordica uses its Energy 2 Ti construction in the Santa Ana 93—that is a balsa wood and carbon core sandwiched between two sheets of titanium. The rocker profile includes early rise in the blunt tip and rounded tail, with 50 percent camber underfoot. Some testers commented on the tip shape and straight-ish sidecut. “The ski can feel sluggish to roll up on edge,” says one tester. “But once you get it on edge it holds well.” Other testers commented on the flex profile of the ski—made of lightweight materials and two sheets of metal. “It feels damp and heavy in the shovel, which reduces responsiveness,” says one tester. Though damp and even stiff flexing, testers felt that aggressive skiers would appreciate the balance of stability and agility from the Santa Ana 93.

The Santa Ana 93 performed well off-piste, in terms of offering stability in changing conditions. “They held their own in hard bumps and cut up snow,” says one tester. “If you control them, they give back.” It’s here that testers agree on the ski’s performance: Ski aggressively and pressure the tip and the ski will roll on edge and offer stability and edge-hold. However, ski tentatively, and the ski feels damp and heavy underfoot, with slight tip chatter. All in all, the Santa Ana 93 is an advanced skier’s cruiser ski, favoring GS turns and offering stability in variable snow, up to the point of powder, where the narrow tip lacks flotation like its wider siblings in the Santa Ana family.

The Santa Ana 93 scored well within the Stability category, particularly off-piste, in terms of offering stability in changing conditions. “They held their own in hard bumps and cut up snow,” says one tester. “If you control them, they give back.” Testers said that if you ski aggressively and pressure the tip, the ski would roll on edge and offer stability and edge-hold. However, ski tentatively, and the ski feels damp and heavy underfoot, with slight tip chatter. Nordica’s Energy 2 Ti construction combines lightweight material—balsa wood and carbon—sandwiched between two sheets of metal, resulting in what one tester called “stable and damp underfoot.”

“Once you get it on edge, this ski provides good edge grip and stability underfoot,” says one tester about the Santa Ana 93. It received its highest tester scores for Edge-hold (along with Carving Pleasure and Stability). Testers felt that Edge-hold was strongest in GS turns, where the ski felt most sure-footed. “There’s good edge bit when engaged in an aggressive arc,” says one tester.

Testers scored the Santa Ana 93 relatively low scores for Resort Float. “The side cut is straight,” says one tester. “The tip shape doesn’t add to flotation.” Other testers felt the ski was too damp and heavy for float. “The ski holds it own in hard bumps and crud, but is a bit heavy in the shovel for soft snow performance,” says one tester.

“Once you get it on edge, this ski provides good edge grip and stability underfoot,” says one tester of the Santa Ana 93. The ski scored high marks for this category, particularly for long turns, where testers praised the 93-mm-waisted ski’s stability and edge grip. The turning radius (15.5 m at 169 cm) favors medium turns, which was where testers felt the most precision and stability. Turn shape variation scored lower than Carving Pleasure, since the ski had a medium to long turn bandwidth, thus loosing some versatility.

Testers scored the Santa Ana 93 lower marks for Turn Shape Variability, however higher marks for Carving Pleasure. “This is a cruiser ski without much turn shape variation,” says one tester. “It favors GS turns, where it delivers stability and decent responsiveness.” The ski felt damp and heavy in the shovel and stiff flexing in short turns. Testers found that the ski could butter and feather turns, but chatters there. Also, testers felt that the ski was sluggish to roll up on edge, particularly if a less than aggressive skier let off the gas pedal.