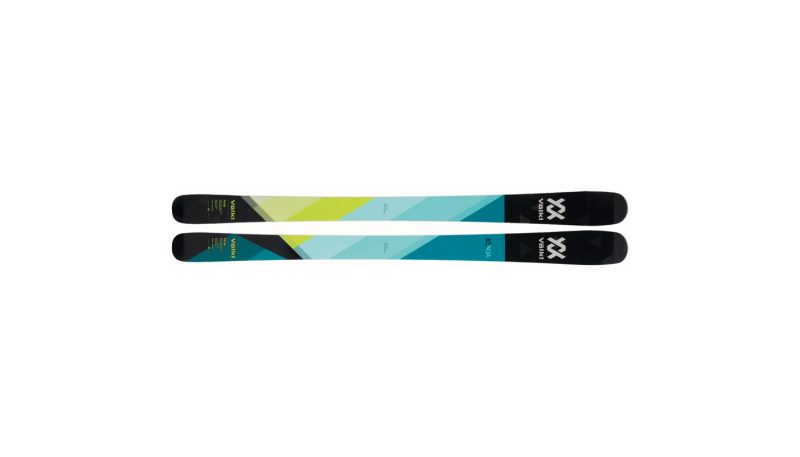 THE VERDICT
The Völkl Kenja is an all-mountain ski with an emphasis on the frontside of the mountains. In off-piste terrain testers appreciated how predictable and stable the ski remains in a variety of conditions. Testers liked the high stability no matter what the snow conditions were, with the exception of powder, where the 90 mm waist simply isn’t wide enough. The Kenja scores showed that testers rated carving over flotation.
FULL REVIEW

The Völkl Kenja is an all-mountain ski that’s predictable and stable in a variety of conditions. It does favor carving over flotation, but the 90-mm waist width ski can hold its own in soft snow or crud. Stability, edge grip and frontside performance are the Kenja’s main focus, thanks to full length sidewalls, a layer of metal and a multilayer woodcore. “This is a no-brainer, predictable solid turner that loves speed, doesn’t waiver and can shut it down when needed,” said one tester. The Kenjas suit a range of ability levels thanks to that stability underfoot and strong construction. The more you put into the Kenja, the more fun you have as you bend and engage the full-length vertical sidewalls.

The Kenja has a race-ski style construction, essentially a classic wood/Titanal sandwich ski, which includes a layer of titanium, vertical sidewalls and multilayer wood core with poplar and dense ash underfoot. The tester comment “feels Volkl strong and grippy,” refers to Völkl’s focus on edge grip, coming from racing heritage. What changes the personality of the Kenja, however, is the moderate tapered tips and the rocker profile that includes tip and tail rocker. Though not apt at smearing or buttering, according to one tester, the Kenja is “great in transitions between variable terrain and conditions.” The 90 mm waist lowers versatility for big snow days, but the freeride-influenced shape and race-ski construction enhance frontside performance with forays into the back.

The last updates to the Kenja included a slightly wider platform and a more friendlier attitude. One tester felt the 2018 version “seemed more sluggish than previous Kenjas, but also very stable and damp.” Ideal customers target intermediate through expert skiers. “Advanced through expert skiers will like the variety of terrain the Kenja can play in, while aspiring experts will find predictability and stability,” suggested one tester. Thanks to its frontside performance, the Kenja could be an all-mountain Eastern ski or part of a two-ski quiver for a Western skier with high hopes of skiing powder.

Tester scores varied for Responsiveness because to some, the Kenja had a small sweet spot and a heavy feel, though was easy to turn. The multilayer wood core is made up of dense hardwood underfoot and and lighter wood around it as well as having a full layer of Titanal. Though easy to turn, the dampness usurped a dynamic feeling, though that resulted in predictability.

Testers all gave high scores for Stability. “This is a no-brainer, predictable solid turner that loves speed, doesn’t waiver and can shut it down when needed,” says one tester. Metal and wood core boost stability along with the maneuverability of the big, rockered tip.

The Kenja does have a fairly large, rockered tip that can float or deflect chunks of cut up snow. The 90 mm waist, however, left some testers wanting more girth for deeper days. Otherwise, the Kenja comes close to a one-ski quiver for an off-piste skier… until the snow totals hit the payload and the Kenja’s platform won’t float like fatter skis will.

The Kenja scored well in versatility in terms of variable terrain and conditions. Where versatility slacks off, however, is in powder snow, where the waist isn’t wide enough. Otherwise, the Kenja is a frontside ski in a freeride body and can tackle moguls and crud, while crushing the groomers.

The Kenja has hardsnow acuity thanks to the power of metal and a race-ski style construction with vertical sidewalls. The tail felt stiffer than the tip, and some testers suggested that could throw skiers into the back seat. Otherwise, testers praised the Kenja’s solid feeling underfoot and stability at speed and in big radius turns. “This is a no-brainer,” said one tester. “It loves speed and it does not waiver.”

Continue Reading
WHERE TO BUY
MSRP
$775.00
BEST DEAL
$377.96
*Your purchase helps to support the work of Gear Institute.
HOW WE TESTED