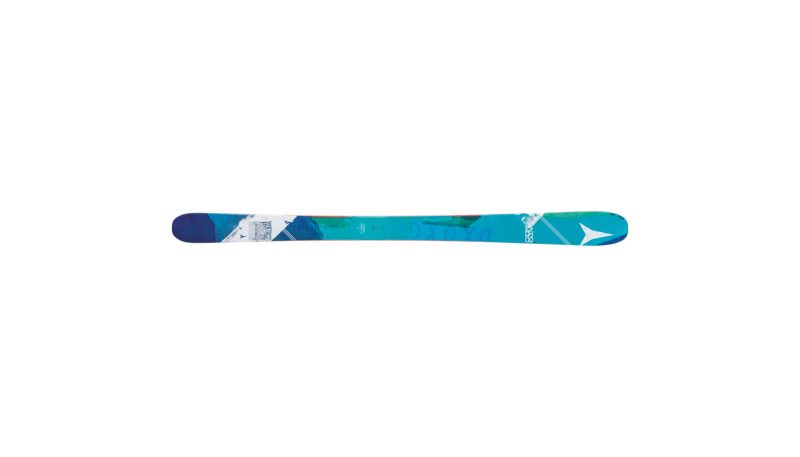 THE VERDICT
The Atomic Vantage 95 C W nails the coveted one-quiver award thanks to its turn-friendly, mid-fat 95 mm waist and sporty yet lightweight construction. Testers gave Atomic’s widest women’s all mountain ski high marks for Stability, Carving and Responsiveness and slightly lower scores for Float. Testers noted a damp feeling and lack of rebound energy out of the turn but all in all, the Vantage 95 C W is a grab-n-go ski strong enough to satisfy most all mountain skiers.
FULL REVIEW

Fun to ski, stable and quick underfoot, the Atomic Vantage 95 C W is as close to a one-ski quiver as you can get. “This ski crushes the crud and gives fierce confidence in high angles plus a big sweet spot,” said one tester. “A grab-n-go Western woman’s choice for most conditions.” “Turn it up corduroy – this ski loves to turn.” Atomic’s Vantage series is designed to match the demands of hardpack and off-piste conditions and the Vantage 95 C W is the widest of the all-mountain skis.

Atomic aims for “equal performance in all conditions” for the Vantage 95 C W, building the ski with a construction that aims for “light” and “strong.” A few key technologies follow this light and strong modality. Along with an ash and poplar wood core, the Vantage 95 C W has Atomic’s Carbon Tank Mesh – a layer of rigid, mesh-like woven carbon used for its high strength-to-weight ratio, which runs the length of the ski. A full “Vantage Firewall” beefs up the sidewall for increased edge grip and vibration absorption. Atomic’s Mountain Rocker adds rocker into the tail and slightly more in the tip. Lastly, the dimensions of the ski (131-95-116 mm) geared toward a progressive all-mountain ski that can carve on groomers, float in powder, smear in tight spots and power through crud.

It’s a big statement to claim “equal performance in all conditions,” but tester scores for the Vantage 95 CW prove that Atomic was successful with its intent. “This ski does most things really well,” said one tester. “It wins the award for most versatile.” Highest scores came in for Versatility, followed closely by Carving, Float and Stability. Slightly lower scores came in for Responsiveness. Some testers said the ski felt a touch damp and that the tail and sluggish to accelerate out of the turn. The tail is rounded in an all-mountain profile. This tail shape increases versatility, but sacrifices the kind of turn exit acceleration that a piste-oriented flat tail race ski would have. All in all, testers felt that was a slight sacrifice in terms of the overall versatility that the Vantage 95 C W has.

The Vantage 95 CW received fairly high scores for Responsiveness. Testers felt the ski was stable underfoot, with a big sweet spot and capable of a range of turn shapes. Though slightly wide (at 95 mm underfoot) for short swing turns, the ski felt balanced thanks to camber underfoot and tip rocker that aided with turn initiation. To some, the ski felt a touch damp, a product of the wood core and mesh-like woven layer of carbon.

Along with Versatility, testers said Stability is the Vantage 95 CW’s biggest attribute. Tester comments include “stable at speed,” “nuanced turner” and “has a great big sweet spot.” Thanks to the lightweight yet strong construction, testers said this all-mountain ski suits a range of ability levels, thanks to its confidence-inspiring stability in challenging snow conditions and at speed.

The Vantage 95 CW had adequate Resort Float, which it received fairly high scores for. Tip rocker, a mid-fat waist width (95 mm) and light construction helped increase float. Though not the top choice for a powder day, testers praised its float, which adds to the Vantage’s versatility, where it performs everything well, all over the mountain.

The Vantage 95 C W received top marks for Versatility, in both turn shape ability and ski conditions performance. “Adventure skiers can take advantage of the Vantages versatility,” said one tester. “This ski is strong enough to satisfy most all mountain skiers.” Atomic seems to hit a sweet spot in terms of finding the waist width (95 mm) that can handle powder, mixed snow as well as still carve on the groomers. The full-length carbon weave in the Carbon Tank Mesh lightens the load, while still maintaining enough torsional rigidity to handle speed and the bumpy spots. Testers found the Vantage 95 C W caters to nearly all ski levels, recommending that more aggressive skiers seek the longer length (it comes in only three lengths: 154, 162, 170). Testers also noted that this all-mountain ski transcends regional boundaries, meaning that it’s versatile enough to satisfy needs of both Western and Eastern skiers.

The Atomic Vantage 95 C W demonstrated great capacity to turn – both in long and short radius turns, though it’s a little wide for short swing turns. “This agile and energetic ski loves to turn, whether big or little,” said one tester. Atomic’s full “Vantage Firewall” beefs up the sidewall for increased edge grip, which increased both Responsiveness and Carving acumen. The only drawback, according to some testers, has to do with the all-mountain tail shape and tail rocker as the tail doesn’t accelerate out of the turn like a flat-shaped piste-oriented ski. Overall, testers felt that the stellar versatility of the ski outweighs the drawbacks.

Continue Reading
WHERE TO BUY
MSRP
$600.00
BEST DEAL
$279.99
*Your purchase helps to support the work of Gear Institute.
HOW WE TESTED