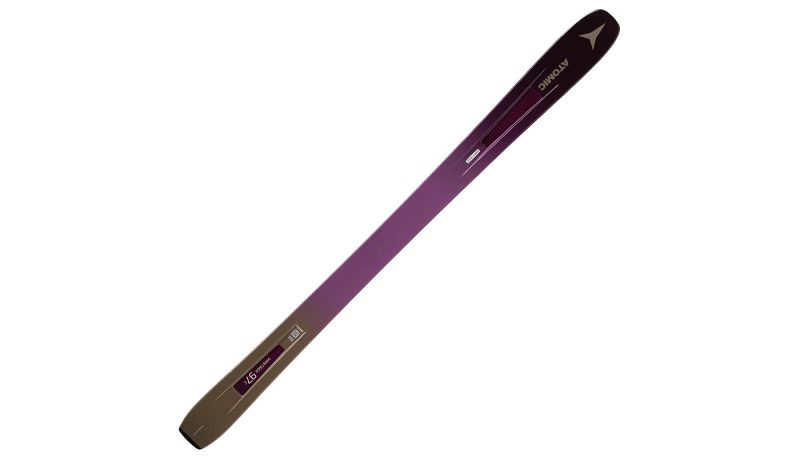 THE VERDICT
The carbon-reinforced Atomic Vantage 97 C W is a light and maneuverable ski that can both pivot and carve, favoring short to medium radius turns. Testers appreciated its smooth turn transition and agility in bumps or on hardpack. The lightweight Prolite construction favors moderately aggressive all mountain skiers, according to testers, who also noted that the light tip can feel too light at speed in long turns, where the edge grip diminished. Though light and maneuverable, the ski lacks pep and liveliness, which it trades for smoothness and ease of short turns or pivoting around tight spots or bumps.

The Atomic Vantage is a light, maneuverable, no-surprise ski that can both pivot and carve, favoring short to medium radius turns. “This ski is resilient,” says one tester. “It’s light yet sturdy and willing to take on terrain without faltering.” Testers gave the 97-waisted ski its highest marks for Responsiveness and Carving, followed by Float, Stability, and Versatility. “It lacks long-term edge grip,” says one tester. “That’s when the tip feels pretty light.” Testers also characterized the ski as “smooth” and “consistent,” but also “lacking pep and liveliness.”

Atomic’s Vantage line for women consists of a family of four models: The 107 CW, the 97 CW, the 86 CW and the 90 TiW. All have carbon in the form of what’s called Carbon Tank Mesh (with the exception of the 90 Ti, which has Titanium Tank Mesh). All Vantage models have been redesigned with Prolite construction, built to be lighter and stronger than previous models. The Prolite chassis is slim and light, built around a layer of Atomic’s Tank Mesh (Carbon Tank Mesh, in the case of the 97 CW), which reinforces the ski in strategic areas, running from tip to tail. The 97 CW has a full sidewall construction, a wood core, as well as Atomic’s Energy Backbone placed along each edge.

Atomic’s design philosophy with the revamped Vantage line is centered around building light (as in lightweight and maneuverable) skis from the ground up, instead of taking materials out of an existing ski. All testers commented on the weight of the ski. “The lightness makes it a fun cruiser,” says one tester. “However, the tip was a little too light and chattered on harder, steeper conditions.” Stability scores dipped a little because of the light tip at speed. Testers felt that the Vantage 97 CW lost some edge grip in long turns. The turn radius is 17 meters (at 164 cm length), thus designed for medium to long turns, but testers thought it performed well in short turns and was also able to pivot, therefore increasing turn shape variability.

The Vantage 97 CW has a predominantly wood and carbon core and a slim profile, resulting in easy maneuverability in terms of short turns and pivot turns. All in all, the ski feels smooth, especially in turn transitions, and well balanced when moving from variable snow conditions. According to testers, the carbon and the lightweight construction affect the ski in terms of personality: “Light and maneuverable, but lacks pep and liveliness,” says one tester.  The result, according to one tester: “A ski for moderately aggressive, all-mountain skiers.”

The Vantage 97 CW received its highest scores for Responsiveness. Testers noted that the ski could both pivot and carve while also “plowing” through variable snow. The ski, with a 97-mm waist, has a predominantly wood and carbon core and a slim profile, resulting in an easy maneuverability, favoring short to medium range turns. The ski feels smooth, especially in turn transitions and well balanced when moving from variable snow conditions. Testers did note that the lightweight carbon construction does result in a damp feel. “These skis are not poppy turn to turn,” says one tester.

“The lightness makes it a fun cruiser,” says one tester of the Vantage 97 CW. “However, the tip was a little too light and chattered on harder, steeper conditions.” Stability scores dipped among because testers detected the light tip at speed. Testers also felt that the Vantage 97 CW lost some edge grip in a long turn. However, testers appreciated the easy maneuverability and the ski’s ability to smoothly plow through variable snow. “It’s a no-surprise, all mountain ski,” says one tester.

The Atomic Vantage 97 CW received moderate scores for Resort Float. The light construction is a boon for float, along with the easy maneuverability and smooth flex. Testers were clear that the ski is an all-mountain ski for moderately aggressive skiers who cruise more than push off-piste in powder or cut-up conditions.

Testers gave the Atomic Vantage 97 CW high marks for Carving, pinpointing the ski’s easy maneuverability in short turns and pivot turns. “This is an easy turning ski that can do it all,” says one tester. In long, GS turns, however, testers felt that the ski lost edge grip (and also the tips began to chatter). Testers also detected tip chatter on hard, steep conditions. All in all, testers recommend this ski for all-mountain cruisers.

Continue Reading
WHERE TO BUY
MSRP
$600.00
*Your purchase helps to support the work of Gear Institute.
HOW WE TESTED