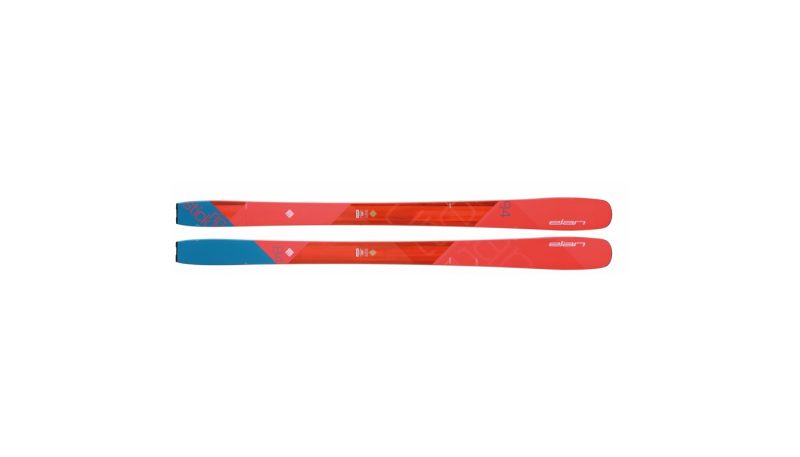 THE VERDICT
The Elan Ripstick 94 W is a strong freeride ski with an extensive lightweight construction. The combination of TNT technology, Amphibio inside/outside edge rocker profile, lightweight tips and full sidewalls results in a ski that testers scored high for Carving and Resort Float. The Amphibio profile has assigned right and left skis designed for maneuverability and edge grip. In that vein, the Ripstick 94 takes work to figure out and not as intuitive as other skis. The rockered edges extend up to the tip laden with Vapor Tips, which act as they sound, in order to reduce weight and vibration. Some testers felt the ski was shaky on cat tracks in the flats. To that end, testers praised the Ripstick 94’s acuity in the steeps and many called it “a charger.” Overall the favorable scores for Carving and Resort Float show that Elan’s mission of “taking progressive ladies anywhere and everywhere” succeeds.
FULL REVIEW

A freeride ski that has deceptively bomber performance in a lightweight package, the Elan Ripstick 94 W provides rock-solid edge grip, strength underfoot and fatigue-reducing feel on the knees. The freeride feel surpasses the connotation of a surfy powder ski, and instead excels at the more technical aspect of all-mountain skiing. Though maneuverable and stable for intermediate skiers, the Ripstick 94 W is also strong for aggressive skiers. “Got steeps?” asks one tester. “This ski performs best on the steeps. It’s lightweight but you can charge with it.”

The extensive lightweight construction includes the combination of TNT technology, Amphibio inside/outside edge rocker profile, lightweight tips and full sidewalls result in a ski that testers scored high for Carving and Resort Float. The Amphibio profile does require attention to ski correctly, in terms of putting the right and left ski on the assigned foot in order to feel the easy maneuverability and edge grip the technology delivers.

Elan’s Vapor Tips inserts are composite inserts placed from the tip to the back of the forebody of the ski to reduce weight and vibration. Testers didn’t comment on the tips, as they did not stand out from the lightweight construction. Scores were high for Resort Float as the ski felt nimble and light through soft snow.

As the RIpstick 94 is not as straightforward as some other skis, some testers felt the ski was nervous on cat tracks in the flats. To that end, testers praised the Ripstick 94’s acuity in the steeps and many called it “a charger.” Overall the favorable scores for Carving and Resort Float show that Elan’s mission of “taking progressive ladies anywhere and everywhere” succeeds.

For most testers, the Ripstick 94 W received its highest scores for Responsiveness. “This ski is lightweight, strong underfoot, fast and exits the turn nicely,” says one tester. The Ripstick has a SST sidewall construction for frontside performance. The core construction has a high strength-to-weight ratio with carbon tubes running through the laminated wood core. Specifically, testers praised the Ripstick 94 W most for performance in steeps on hardpack.

The Ripstick 94 W received fairly high scores for stability. “It can feel boxy, but it’s strong underfoot and bomber on edge.” Elan’s TNT technology aims to blend balance, power and lightweight construction. It succeeds, and despite feeling surprisingly light at first ski, feels stable and strong after a few runs.

Testers gave the Ripstick 94 W fairly high scores for Resort Float. It has a more tapered tip than other big-shovel all-mountain models. However, it’s the lightweight construction and the 94-mm waist that add Float performance.

Versatile in terms on what an aggressive skier can get out of it in terms of high performance on the more technical all-mountain conditions like steeps, powder and crud. Where it lacks in versatility was really only with cat tracks and flats, where it mildly felt nervous.

The 94-mm-waisted Ripstick (there are three: the 86, 94 and 102) received praise and high scores for carving, with the ability to arc on groomers and hold no steep runs. “This ski performs best in the turn on steeps. It’s lightweight, but you can charge,” says one tester. Part of its charge means that you can feel the ski’s edge grip throughout the turn. Though the tip doesn’t engage like a race ski, it enters decently, feels strong underfoot with a quick turn exit. However, testers said it can feel nervous on the flats when flat on the base because the ski wants to stay in the turn.