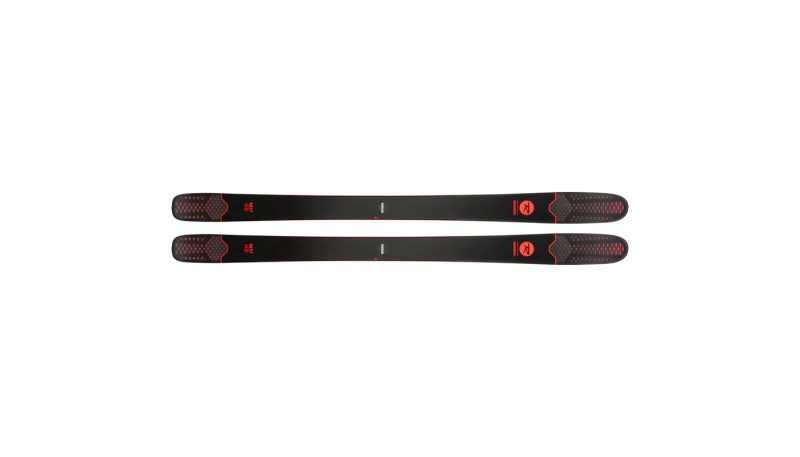 THE VERDICT
The Sky 7 HD W tends toward off-piste conditions where it can conquer crud, float well and smear. With an 18 m radius, it favors long turns in soft or variable snow. It’s less apt to make short turns with any dynamic personality as it has a damp feeling with easy maneuverability. The long, low rocker adds to Flotation and crud performance, but impedes the tip’s engagement in performance turns on hardpack. The addition of Air Tip 2.0 and Rossignol’s vibration-absorbing Carbon Alloy Matrix change up the Sky 7 HD from earlier iterations. “This new Sky morphed from ‘slarvy’ to a big backside ski for intermediates through advanced skiers,” said one tester.
FULL REVIEW

The Sky 7 HD W favors backside conditions, where it can bust crud, float well, smear and hold long turns. “If you’re looking for a big Betty ski for the backside, this ski will do,” said one tester. The 2018/19 Sky 7 has been redesigned, with the addition of Air Tip 2.0, which more efficiently integrates the honeycomb tip filled with air into the forebody of the ski. Power Turn Rocker adds a long, low rocker to the tip for both flotation and maneuverability in a variable snow. Core construction includes Rossignol’s Carbon Alloy Matrix – a weave of energy-increasing carbon fiber and vibration-absorbing basalt – added to the paulownia wood core.

Testers said the burly ski had a stiff construction and requires power to turn on hardpack, though said it was easy to smear, with enough float and play for powder and crud. Testers gave high scores for Resort Float and Versatility, differentiating the Sky 7 as an all-mountain back ski as compared to more responsive, short-turning all-mountain front models. Average scores came in for Carving and Stability, with lower scores for Responsiveness. “It’s not responsive or quick on steep, icy slopes,” said one tester. “But it favors long, gliding turns and easily manages cut up or soft snow.”

Sidewall construction includes full-length vertical sidewalls, for better edge grip, however, some testers felt that the long, low progressive Powder Turn Rocker impeded the tip’s engagement in turns on hardpack resulting in feeling as if skiing on only two-thirds of the ski. Though the tip didn’t engage like more frontside-oriented skis, testers felt that the Air Tip 2.0 (in the tips and tails) helped reduce swingweight in the tip. The tip didn’t get kicked around in crud, and helped to “smooth out turbulence,” according to one tester. The overall shape of the ski allowed for smearing, pivoting and easy flotation in soft snow.

The Sky 7 HD W’s lowest scores came in for Responsiveness. “This is a big, burly ski,” said one tester. “It feels like a man’s ski.” The combination of the 18 m turn radius, 98 mm waist and strong wood/carbon alloy core creates a ski that favors long turns in off-piste conditions and not in short turns on hardpack.

Testers gave the Sky 7 HD W average marks for Stability. Many remarked that the ski felt burly and big, best when cut through crud or smoothing out turbulence. The long, low Powder Turn Rocker increased float and maneuverability in soft snow but felt over-rockered in the tip causing some testers to feel like they were only skiing two thirds of the ski and challenged to feel the tip at the top of the turn, thus reducing stability.

Testers gave the Sky 7 HD W high marks for float where they appreciated the easy swingweight of the tips. Updates the to Sky include new Air Tip 2.0 – an integrated construction like overlapping fingers – designed to reduce weight and increase maneuverability. “It’s a good powder teaching ski,” said one tester.

The Sky 7 HD W is most versatile in backside conditions, where testers said it performs best. “Cuts through crud and smooths out turbulence,” said one tester. With decent float and passable carving skills on the frontside, it most suits skiers who spend time off-piste in variable conditions.

The Sky 7 HD W received average scores for carving. According to testers, the 98-mm-waisted ski favored long turns on hardpack. The ski lacked responsiveness and felt too burly for short turns. Also, some testers said Rossignol’s longer, lower Powder Turn Rocker impeded the tips engagement at the top of the turn on hardpack. All in all, the ski was most proficient in real all-mountain conditions where testers said it could cut through crud or float well. “This ski is made for 70 percent off-piste skiing,” said one tester. “If you’re looking for a big Betty ski for the backside, this ski will do.”

Continue Reading
WHERE TO BUY
MSRP
$750.00
BEST DEAL
$399.95
Skis.com
*Your purchase helps to support the work of Gear Institute.
HOW WE TESTED