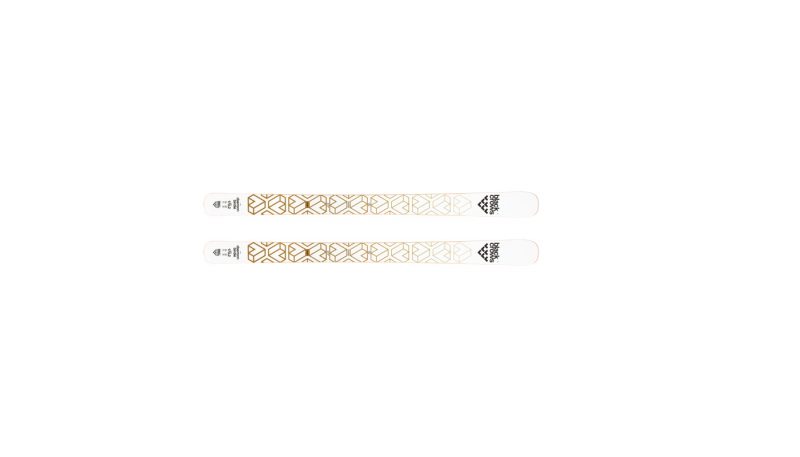 THE VERDICT
The Black Crows Daemon Birdie is an all-mountain model with full reverse camber. It’s designed for pivoting and carving, however, testers felt that the ski was too light and lacking in edge grip to accurately carve turns. The Daemon Birdie rewards a neutral to less aggressive stance and favors soft snow. All in all, the 99-mm-waisted reversed cambered ski disappointed aggressive skiers, but its lightweight semi-cap construction, enlarged edges and dampening Titanal plate underfoot lends itself to women looking for an easy-to-turn freeski for soft snow.
FULL REVIEW

The Black Crows Daemon Birdie is an all-mountain model with full reverse camber. It’s designed for pivoting and carving, yet testers felt that the ski was too light and lacking in edge grip to accurately carve turns and scored it moderate to low for Carving. Testers felt that the Daemon Birdie performs best in soft snow, attributed to a 99 mm waist width and full reverse camber (where the middle of the ski touches the snow while both ends arc up). Full reverse camber works well in soft snow as there is no effective edge to seek a hard surface, however, that also means a lack of edge on a hard surface, hence low scores for Carving Pleasure.

All in all, the Daemon Birdie disappointed aggressive skiers who tend to pressure the front of the ski in order to bend it and arc on hardpack. “I wanted more sidecut,” said one tester. “It didn’t perform GS turns at all and was too light to trust.” Carving may not be its forte, but smearing is. The lightweight semi-cap construction, poplar woodcore, enlarged edges extending to the tip and the dampening Titanal plate underfoot lend it toward women looking for an easy-to-turn freeski for soft snow conditions.

Black Crows describes the flex of the Daemon Birdie as solid underfoot and progressive in the tip and tail. Testers were not impressed with the unbalanced feel, and some flex the pattern was affected by the skier’s stance and the ski favored a neutral if slightly aft stance (the antithesis to the aggressive, racer stance). “You need to be over the middle of your foot to make them pivot,” said one tester. “There’s very little, if any, edge grip.”

The Daemon Birdie received low scores for Responsiveness. Some complained that the ski felt planky underfoot while other testers mentioned low reliability in the carved turn. Soft snow, however, is where the 99-mm-waisted ski performed best “was enthusiastically energized,” according to one tester.

“Got camber?” asked one tester. “The contact point is miniscule and the rest of the ski is off the snow.” Soft snow aside, the Daemon Birdie received moderately low scores for Stability. Some testers reacted negatively to the profile of the ski, with reverse camber, front rocker and early rise in the tail. Though Black Crows says the full reverse camber profile and Titanal adds easy handling, pivoting and carving, nearly all testers missed the edge grip that comes from camber and felt that the ski’s bandwidth extended only to soft snow.

The Daemon’s Resort Float scores were its highest. The nearly 100 mm waisted ski can smear and float in soft snow as well as pivot thanks to the reverse camber, front rocker and early rise tail. The light semi-cap construction aids in flotation.

The Black Crows Daemon Birdie rated low for Versatility with the testers who felt it performed best in soft snow, but not much else. These testers commented on lack of turn shape and snow condition variability. Several testers “who don’t rail like others” liked the lightness of the ski and the easy “smearability” from the reverse camber.

Testers agree that the Daemon Birdie is easy to turn but not easy to carve. Edge grip was missing on this full reverse cambered ski. “The contact point is miniscule and the rest of the ski is off the snow,” says one tester. Even though Black Crows says that the enlarged edges extend to the tip, testers couldn’t feel the edges engage into firm snow. The ski more aptly pivots and smears, performing best in soft snow. Though testers felt a solid flex directly underfoot, they felt it was too precise to make the ski ideal for a variety of skiers. All in all, the Daemon Birdie favors turns in soft snow and not on hard snow or groomers.

Continue Reading
WHERE TO BUY
MSRP
$770.00
BEST DEAL
$639.96
*Your purchase helps to support the work of Gear Institute.
HOW WE TESTED