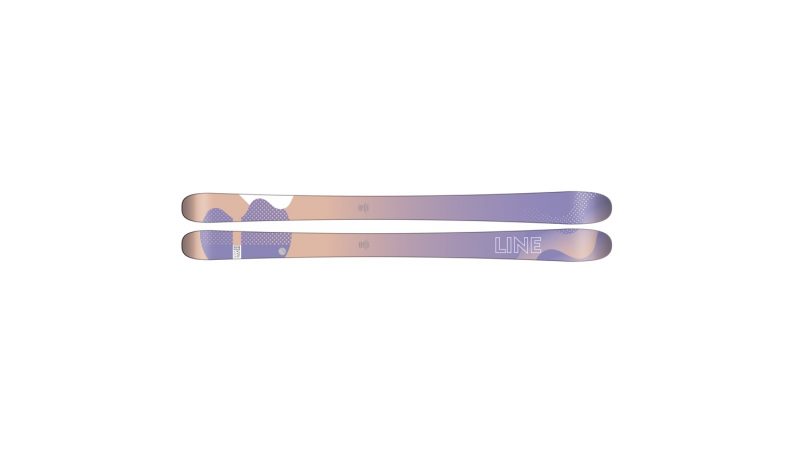 THE VERDICT
The Line Soulmate 92 smears and butters, thanks to a tapered tip and tail. “Favor the middle of the ski? This ski likes to pivot there and smear in soft snow,” said one tester. “This is not a carving ski,” said another. “It lacks life and luster while turning and it’s hard to find the tip to initiate.” The Soulmate 92 received its highest score for Resort Float while scoring below average for all other fields.
FULL REVIEW

The Line Soulmate 92 was redesigned for 2018, with the addition of Carbon Fiber Filaments called “Magic Finger Filaments” or carbon stretching tip to tail. Line’s Capwall construction includes a durable cap over the top and sidewalls underfoot. Further core construction details include full-length maple stringers surrounded by aspen. The Soulmate 92’s early-rise, thin tip starts low and closer to binding, designed to reduce weight while a softer tip and stiffer tail are designed to add float as well as power and control.

The testers found it a challenge to find the sweet spot of the ski. To some, it lacked life and luster underfoot. It was also challenging to engage the tip and felt wobbly at speed. The ski was best in soft snow where it buttered and smeared easily. Tester sentiments varied greatly on this ski, ranging in overall comments and ideal consumers. “Who is the ideal customer?” asked a tester. “A laid back skier looking to cruise or smear through soft snow. Just don’t expect a carving ski.” Other testers felt the Soulmate 92 would make a great progression ski for intermediates to get to advanced, thanks to the supple, easy and even flex and ability to butter and smear.

The Soulmate 92 received low scores for Responsiveness as testers noted a lack of edge grip and inability to feel the tip of the ski while initiating the turn. “This ski can smear and butter easily, but it doesn’t have any characteristics of a carving ski,” said one tester.

Testers gave the Soulmate 92 low scores for Stability. “It’s wobbly at speed,” said one tester. “It skied short and feels difficult to turn quickly,” said another. The ski was most stable in soft snow and on lower angled slopes but when the terrain challenge increased, stability decreased.

Testers disagreed on ratings for Resort Float. Some scored the 92-mm-waisted ski above average for flotation, though others felt that the lack of stability at speed negatively affected the flotation. All agreed, however, that the Soulmate 92 performs best on soft snow.

The Soulmate 92 received lower than average scores for Versatility. Testers noted that the ski butters and smears easily but that it doesn’t engage well at the tips and thus lacks in Carving. Also, the Soulmate 92 performs best in soft snow, not hardpack where carving is preferred. It’s also not supple or wide enough for powder snow. All in all, the Soulmate 92 is a bi-directional ski, “best for laid back skiers looking to cruise through soft snow,” according to one tester.

“The Soulmate 92 is not a carving ski,” stated one tester. Not only did the ski feel dense, testers had a hard time feeling the tip of the ski to initiate the turn. On hardpack, the ski lost confidence underfoot and some testers mentioned trouble finding the sweet spot. “This ski is easy to butter and smear,” said one tester. But carved turns are not its forte.

Continue Reading
WHERE TO BUY
MSRP
$625.00
BEST DEAL
$479.99
*Your purchase helps to support the work of Gear Institute.
HOW WE TESTED