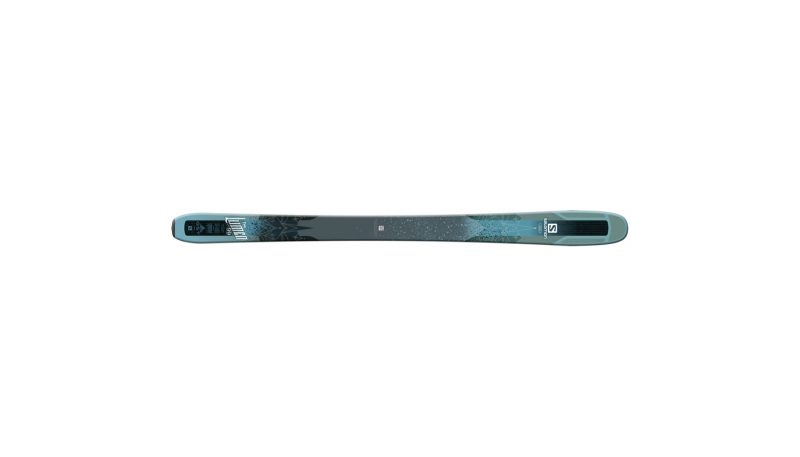 THE VERDICT
Thanks to a well-rounded skill set and easy maneuverability, the QST Lumen 99 performs well in a variety of conditions for a range of ability levels. It’s strong and stable enough for expert skiers and even-flexing enough for intermediates. With a 99-mm waist, titanium insert and carbon/flax weave construction, the ski can feel stiff on hardpack and sluggish in transitions. All in all, what the Lumen 99 lacks in quickness, it makes up with stability, versatility and strength underfoot.
FULL REVIEW

The Salomon QST Lumen 99 is a well-balanced freeride ski that is strong and stable enough for expert skiers, though maneuverable and even-flexing enough for intermediates. Stability is the name of the game, and the harder you ski it, the more stable the ski becomes, even at times during high edge angles or speeds, feeling too stiff. “For those who like a big girl ski, here’s your freeride ski all grown up,” said one tester. Highest scores for the Lumen 99 came in for Stability (“solid underfoot”) and Float (“soft tip nice in soft snow”), followed by Carving (“agile and responsive”). Testers said the Lumen 99 performs as well off-piste as on thanks to its well-rounded skill set.

Testers felt the Lumen 99 struggled on hardpack conditions, where it broke away at edge high angles or lacked edge grip in high speed arcs. Though the Lumen had good edge hold through most turn shapes and generally felt solid tip to tail throughout the turn, the Lumen 99 was sluggish in transitions. “It’s not the quickest ski, but it trades quickness for stability and strength,” said one tester.

At 99 mm underfoot, the Lumen 99 has a wide rockered tip plus a hook-free, tapered and rockered tail. The sandwich sidewall construction includes a titanium insert under the binding area and single laminate, an inverted 3-D (internally milled) wood core plus Salomon unique ingredient in the form of the patented C/FX Superfiber, an extremely strong yet lightweight fiber made from a proprietary woven pattern of flax and carbon. Salomon says C/FX includes high strength-to-weight ratio of carbon with dampening properties as well. Some testers felt the ski was too stiff on hardpack conditions and steep, icy slopes. On less challenging terrain and soft snow, however, testers appreciated the well-balanced flex, torsional rigidity underfoot and good edge hold.

Testers varied in recommendations for the Salomon Lumen 99’s ideal customer – from strong intermediate to all levels to “those who like a big girl freeride ski.” The core construction added to the ski’s stability but took away from responsiveness on steep, icy slopes. Also, some testers felt the gradual tip rocker means the tip lacked full initiation at the top of the turn on groomers, where the tip has a tendency to break away when engages a high edge angles. All in all, however, the Stability and Versatility create a well-rounded ski and the Lumen 99 received several “excellent” rankings from testers.

At nearly 100 mm underfoot, the Lumen 99’s main focus is not Responsiveness, though scores in this field were average. The ski felt sluggish in turn transitions and stiff on hardpack. Though not glaringly responsive, testers felt that what it lacked in quickness, it made up for with stability.

The Lumen 99’s top-rated scores came in for Stability, where it earned comments like  “solid underfoot and stable.” Chock it up to a strong core with carbon, flax, wood and titanium, or full length sidewalls, the Lumen feels solid tip to tail in the turn, with dependable edge hold up to the maximum speed on icy slopes. Vibration absorption comes from several elements including the Pulse Pad, or a layer of rubber around the edges.

Testers gave the Lumen 99 decent scores for Resort Float, as it has the girth to float and cut through crud. Gradual tip rocker adds maneuverability in soft snow, as well as the Hook Free Taper, or 5 point sidecut, where the tip and tail taper in for easy steering.

The Lumen 99 received high scores for Versatility. “This could be a Western woman’s all-mountain, one-ski quiver,” said one tester. Though a little too stiff on hardpack, the ski excelled on and off piste in a variety of snow conditions and turn shapes. Most notably, the ski’s stability contributed to it’s terrain adaptation, allowing the ski to feel solid underfoot in a variety of snow conditions.

The QST Lumen 99 had average scores for Carving. Testers called the ski a Jill-of-all-trades, however, that means it’s not a master of Carving, though it performs there at a satisfactory level. What lowered the Carving score has to do with how the ski can break away on hardpack when at a high edge angle, something expert skiers can achieve. Otherwise, the Lumen 99 with its full sandwich and ABS sidewall construction had decent ski to edge contact throughout the turn.