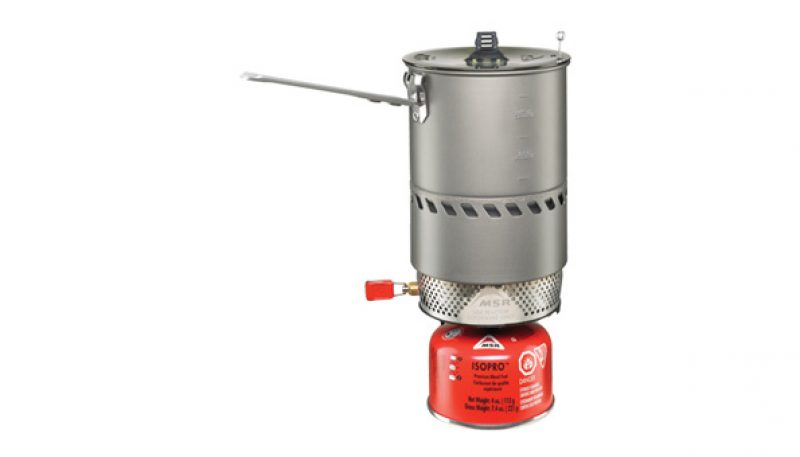 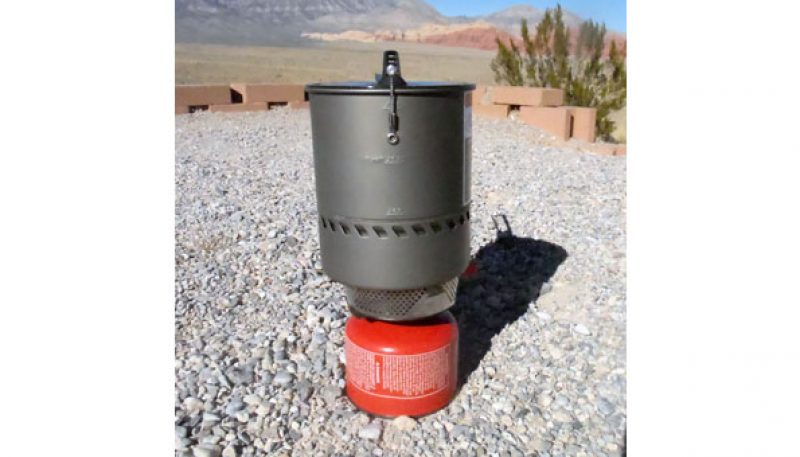 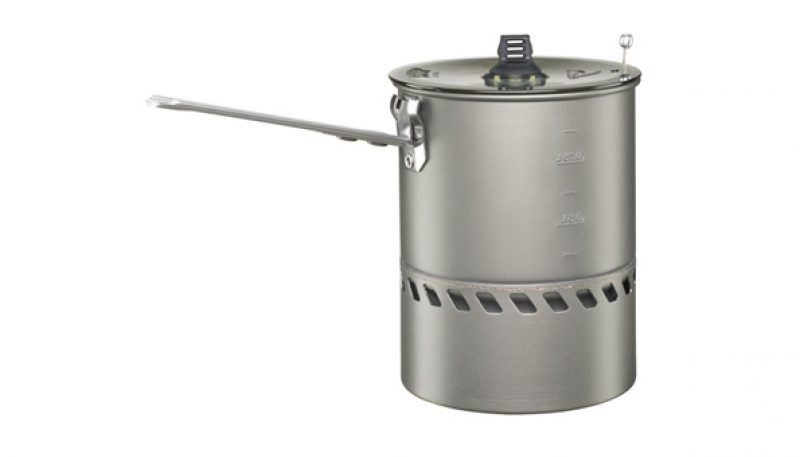 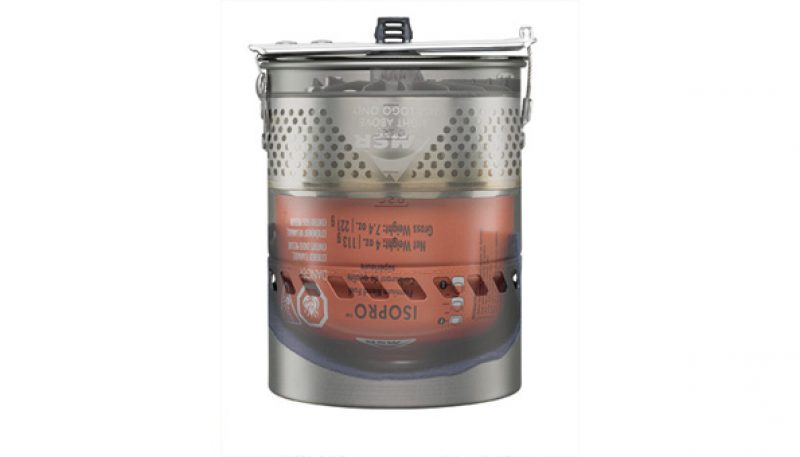 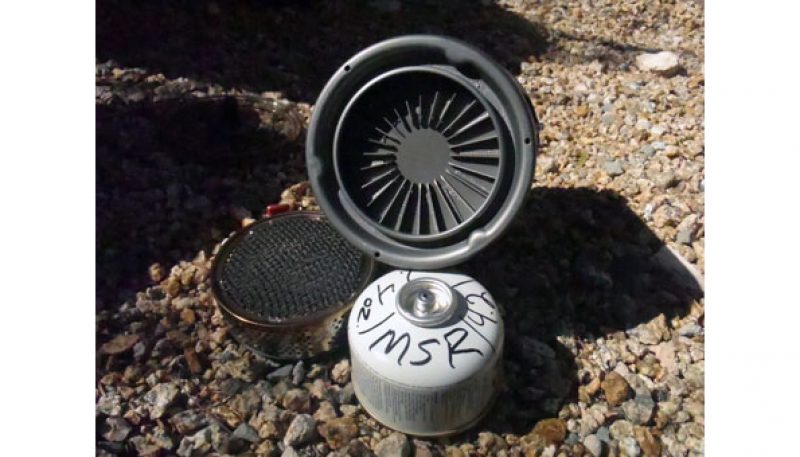 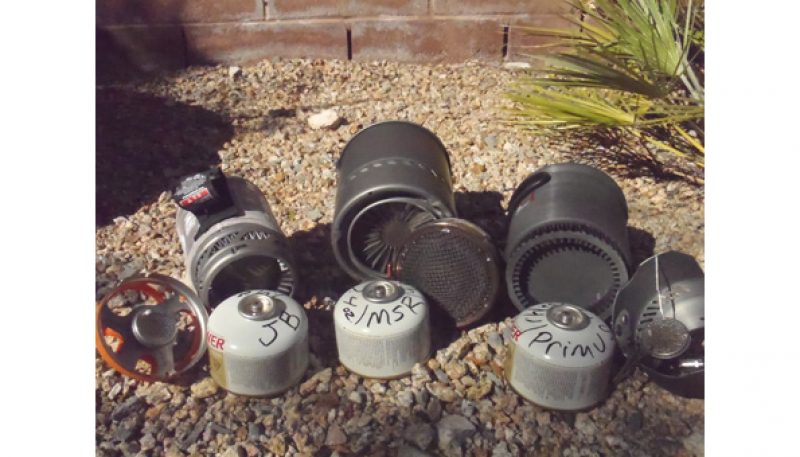 This is the best all-around backcountry canister stove on the market. Compared with other stoves in our test, the MSR Reactor was virtually unaffected by wind, was among the simplest to use, and has a built-in regulator that maintains consistent boil time performance down to the last few ounces of fuel. It’s expensive, but you’re paying for a fast boil, simplicity and consistent performance, even in nasty conditions.

Features
The MSR Reactor is the only canister stove we tested with two jets and it clearly outpaces the competition in boil time and performance in wind. To accommodate the dual jet design, the burner is much larger, almost four times the size of the Jetboil SOL TI and Primus EtaExpress burners.

The burner’s dome shape marries the curved heat exchanger pot base, a design that creates incredibly consistent heat conduction from stove to pot and helps avoid errant breezes that would otherwise be detrimental to performance. The pot is also wider than the EtaExpress and Jetboil SOL TI. (Wider pots are more efficient in heat transfer.)

The pot’s lid functions as it should but needs to be held in place when pouring. The folding handle secures well when packed. There’s no electric igniter on the MSR Reactor, which I don’t see as a drawback, although it would be an improvement (in case you forgot your lighter, or got the flint wet).

The Reactor’s double-layer base wall assists in the forced convection that pulls in so much heat and also helps protect the stove from the wind. Its heat exchangers are smaller and less exposed than the other stoves tested. The exhaust ports let exhaust gases escape without allowing wind to blow the heat away or blow the burner out.

The burner is wrapped in a stainless-steel sheath perforated with lots of little holes—it’s designed to allow you to grab the stove soon after it’s done heating, although it’s a more delicate portion of the stove (but dings ought to be rare, because the stove is normally protected by the pot itself). [Editor’s note: MSR recently wrote us to point out the company hasn’t seen any of these damaged, even in heavy, frequent use.]

Boil Time
To test the MSR Reactor alongside its competitors, we boiled .75 liters of water ten times in calm, sunny conditions. The Reactor averaged 2:53, faster than the Jetboil SOL TI’s 3:12 and the Primus EtaExpress’ 3:19. Water temperatures varied slightly for every boil, but the average at start for the Reactor was 50.8˚ F.

Weight
Without a canister of fuel in it, the MSR Reactor packs at 1 lb, 8 oz. It’s heavier than the Primus EtaExpress (which weighs in at 1 lb 3 oz.) and the 12.3 oz. Jetboil SOL Ti.

Durability
The pot is solid and durable—thanks to its wide, sturdy stance and able to withstand general abuse like being stuffed in the bottom of a loaded pack, kicked around rocks and knocked off the burner a few times. The handle came off once but was quickly snapped back into place.

The Reactor’s stove unit—what screws into the canister—has an aluminum mesh along the outside rim that’s flimsy and dentable. The stove doesn’t feel as rugged as the other systems.

Fuel-efficiency
The Reactor was not the most efficient stove (that award goes to the Jetboil SOL Ti). In total, the Reactor boiled (rolling boil) 9 liters of water from a 4 oz. canister of fuel, the smallest canister size on the market.

The Reactor comes with a pressure regulator that helps maintain boil time consistency as the canister pressure drops, and maintains the same boil times as the fuel diminishes. However, in terms of overall efficiency, the Reactor performed just as well as the Primus EtaExpress, which does not have a regulator. By comparison, the Jetboil SOL TI is also equipped with a pressure regulator and it boiled 12 liters on 4 oz. of fuel.

Wind Performance
In wind tests, the Reactor beat the other stoves in our test. In a steady 10 mph desert wind with gusts pushing well over 20 mph, .75 liters of water boiled on average in 3:08 over three cycles with water temperature averaging 40˚ at time of ignition. The Jetboil SOL TI came in second at 3:30/liter with water also at 40˚. The Primus EtaExpress boils averaged 4:14 with water averaging 52˚.