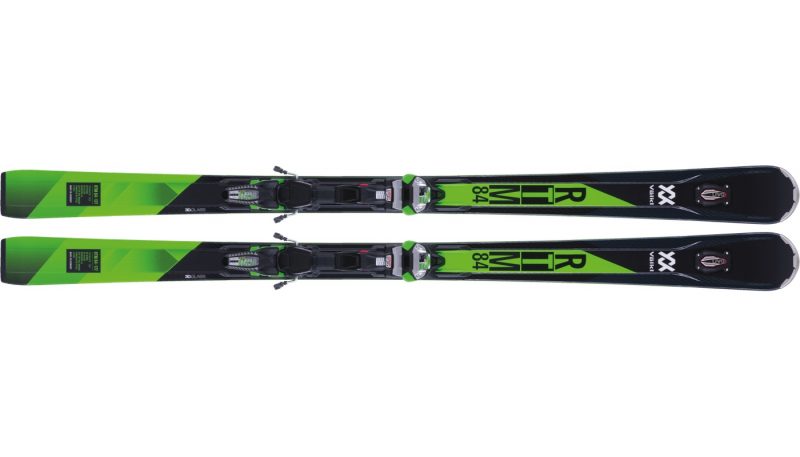 THE VERDICT
The Volkl RTM 84 is one of the most versatile skis in the Carving Category, with the ability to quickly lock onto short swing, medium, and long-radius turns with exceptional grip – as well as an ease of initiation that few carving skis can match. Featuring an exquisitely constructed mix of tip and tail rocker with traditional camber underfoot, along with Volkl’s 3D.Ridge construction, which moves denser, power-transmitting materials underfoot and lighter materials to the shovel/tail and edge, results in a ski with easy to access performance and effortless arc. Ranked as their “Favorite” ski in the Carving Category by 25 percent of our test team, and “Excellent” by everyone else, this is an advanced- to expert-level carver that also features some strong off-piste performance.
FULL REVIEW

“Well-balanced with power and energy,” “Doesn’t take a lot to pressure and put it up on edge,” “Made the boilerplate feel softer,” “Great carve and feel,” “Steady ski that is rock solid on edge,” were just a few of the tester comments describing what a positive experience it was to take the Volkl RTM 84 out to lay some carves on the hardpack. Volkl does a very nice job mixing slight tip and tail rocker with traditional camber for a ski that is super easy to initiate. The 3D.Ridge Construction, which concentrates the stiffer, heavier materials underfoot and in the center of the ski, with the lighter materials toward the tips and tails, also creates a kind of cockpit which allows the skier to effortlessly carve with exceptional grip.

The ski does feel more damp than lively, and doesn’t have the overall pop of a ski like the Dynastar Speed Zone 12, with one tester writing, “It could be more responsive.” It also needs to be on edge for top performance, but that’s the same thing we found with pretty much every ski in the Carving Category. One tester also felt the RTM 84 is too stiff and aggressive for most skiers, and will only appeal to technically proficient experts. It is worth noting that on our test cards, we always ask testers to name three things they don’t like about each ski they test. In the case of the Volkl RTM 84, four testers left that space on their cards completely blank. Overall, we found this to be an incredible versatile carving ski, with enough easy-to-access performance and power that many Frontside Skiers could also consider it as a go-to option for taking off the groomers into tamped down conditions off-piste.

The Volkl RTM 84 did receive two scores of 6 (out of 10) in the Overall Classification of the Carving Category, one from a tester who gave it slightly above average scores across the board, and one who wanted more power in the tail. The other 14 people who tested this ski gave 8s, 9s, and 10s, complimenting it as, “An all-day, everyday ski for skiers on the East or West Coast.” The majority of our test team felt this was the most versatile ski in the Carving Category of our test.

Responsiveness was the one classification where the RTM 84 got its most mixed scores, including four 6s from testers who felt the ski was too damp, without a lot of energy underfoot. The majority of the team gave the ski 8s, 9s and 10s, citing its “Excellent Initiation” and Turn Shape Variability as key factors in the ski’s “Pure Responsiveness.”

The Volkl RTM 84 received high marks from all but one tester in the Stability Classification – even from testers who downgraded it in the Overall and Responsiveness Classifications – for its confident handling on and off-piste. The

3D.Ridge Construction really does contribute to an unshakeable platform with minimal vibrations and lots of easy-to-access power underfoot.

Scores were even higher in the Edge-hold Classification, as the aforementioned 3D.Ridge Construction creates such excellent torsional stiffness – and makes the ski’s grip so easy to engage – that along with the Blizzard Quattro RX, Kastle MX84, and Rossignol Hero Elite, the RTM 84 does feature some of the best Edge-hold in the Carving Category.

The top of the class scores in the Stability and Edge-hold Classification also contribute to higher than average scores for Carving Pleasure. It is indeed a “pleasure” to take the RTM out on the groomers and start laying accurate trenches in the hardpack.

The Volkl RTM 84’s Turn Shape Variability were also at the top of the class. As noted in the Full Review (see above), “Overall, we found this to be an incredible versatile carving ski, with enough easy-to-access performance and power that many Frontside Skiers could also consider it as a go-to option for taking off the groomers into tamped down conditions off-piste.”