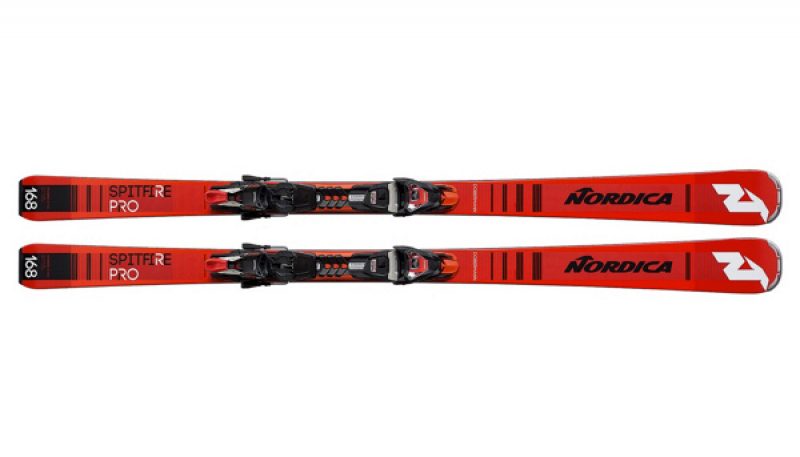 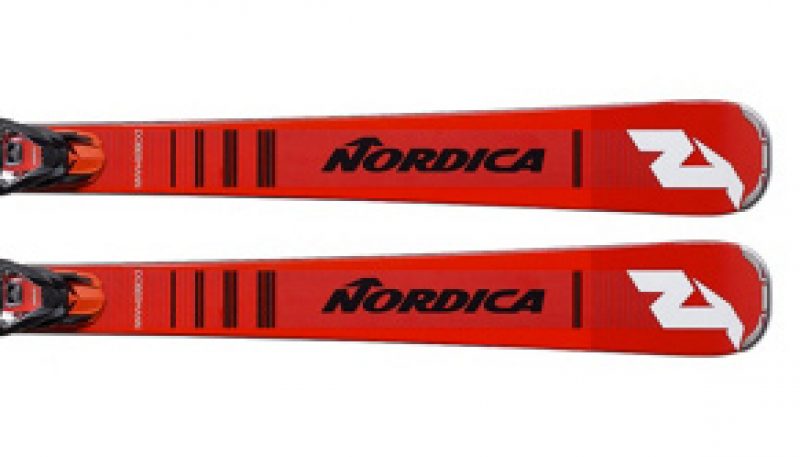 THE VERDICT
As one tester summed up the Dobermann Spitfire RB, “This ski is perfect for town league racers who want to use the same ski for slalom and for GS.” That’s because thanks to an oversized, slalom-style tip for ease of initiation, and giant slalom waist for longer turns, this ski can swivel and grip. On hardpack, the Spitfire’s confidence and power is lights out. This is an experts-only ski, primarily for current or ex-racers who never stop laying deep arcs. Anyone else will never push this ski hard enough to understand how hard it really rips.
FULL REVIEW

The Nordica Dobermann Spitfire RB is the most race ready ski that we tested in the Carving category. Which is saying a lot, since all of these skis are built for superior edge hold and stability on hard snow. It’s built with a wood core and two sheets of Titanal for dampening and vibration absorption, like most of the other skis in this class, but it also include Nordica’s Recoil Power Plate, for even more power at higher speeds.

This, along with a carbon bridge, provides excellent handling and increased confidence, even at the highest speeds. The addition of an oversized slalom tip and GS waist (something Nordica has been using in their consumer-friendly carving skis for years) does make it easier to initiate a turn quickly and really crank down on each turn through each arc. But that doesn’t mean this is a ski that any intermediate could really handle. The Spitfire is built to go fast and hard, on groomed, boilerplate, and even Eastern blue ice, and will frustrate—or flat out scare—anyone who doesn’t have the ability to drive this ski. Buy these boards if you like to treat every run like your own personal racecourse, ride them hard, and you will reap the rewards.

The Nordica Dobermann Spitfire RB earned a couple of 10s (out of a possible 10) in the Overall classification from testers with an East Coast racing background, but saw more 8s, and even a couple of 6s, due to the ski’s need to be constantly driven—and driven hard! As noted in the overall review, this is basically a street legal race ski built to thrill skiers who are still bashing gates in their local beer league, or dropping hard arcs underneath the chair.

Despite the Spitfire’s penchant for hitting hair-raising speeds at the drop of an edge, the oversized slalom tip did help the ski earn decent scores in the Responsiveness classification. “It’s a versatile turner,” one tester wrote, “that is easy to guide from edge to edge with good response from the ski.” The ski did record a couple of 10s in this classification (once again, from highly proficient hard snow technicians who love the Carving category) as well as couple of 8s, and some 6s from skiers who felt the relative responsiveness of the ski only became apparent when you kicked it into a very high speed.

Surprisingly, despite the ski’s bomber performance at the aforementioned rocket ship speeds, the Spitfire got somewhat middling scores in the Stability classification, ranging from a couple 10s in the high end, several 8s, as well as one 7 and one 6. That’s primarily because the ski can feel a little bit hooky and overtly stiff when it isn’t being driven at or above the groomer speed limit. This is a ski that flourishes—and feels rock solid underfoot—when you’re really moving, but gets clunky when you aren’t. If you like to slow down and take it easy once in awhile, check out the Elan Black Edition, or the Rossignol Hero Elite Plus.

Top scores from 10s to 9s—including one 6 at the low end—for the Spitfire in the Edge-hold classification. The two layers of metal and the plate provide serious power for gripping and ripping on this ski. The more you drive it, especially on hard snow conditions, the better it performs.

Same for the Carving Pleasure classification, in which arcing deep, precise turns on the Spitfire is an absolute pleasure. If you have a race on hard snow, under the lights, on a cold winter night, your first choice should be this ski.

The combination of an oversized tip and a GS sidecut do lend to better Turn Shape Variability for the Spitfire according to most of our testers, who gave the ski 10s or 9s at the high end. As mentioned in the Stability classification, however, that’s only if you are really driving the ski at higher speeds. Other testers gave the ski 8s, 6s, and even one 4 in this classification, because of its lack of versatility at lower speeds.