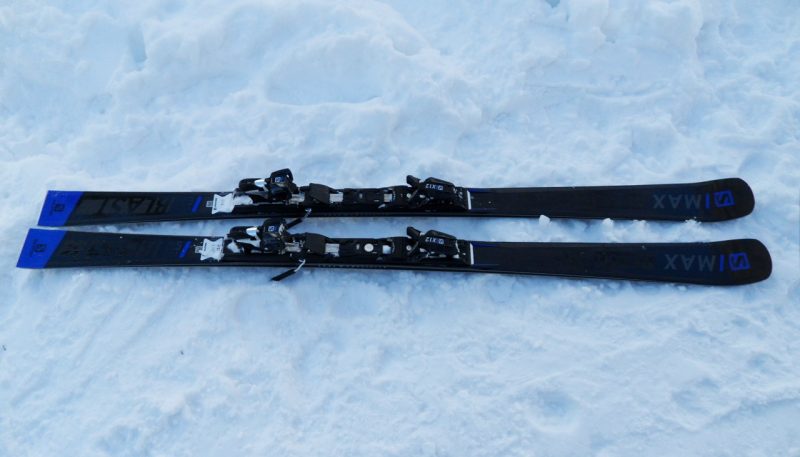 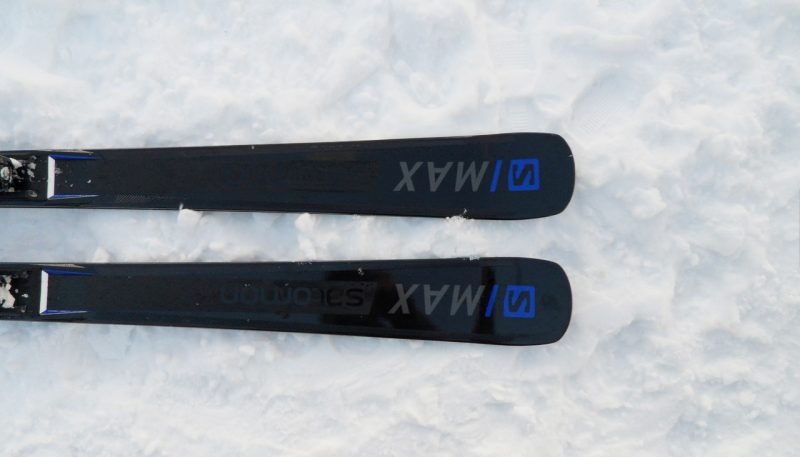 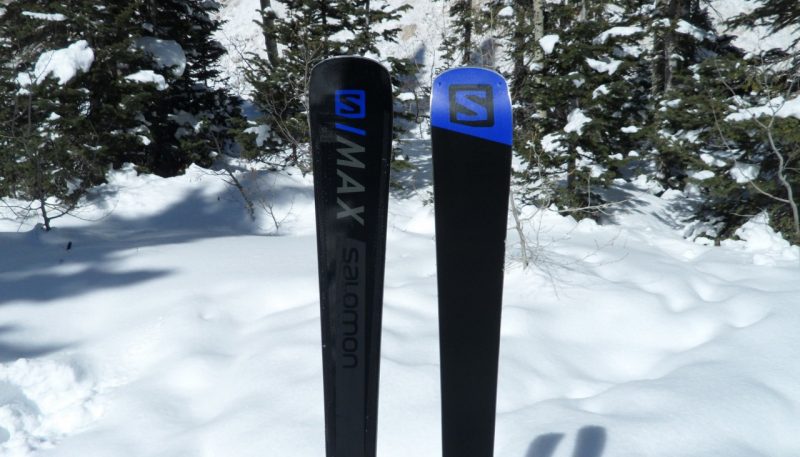 THE VERDICT
Salomon’s new S/Max Blast brings a whole new level of energy and fun to the Carving ski category. Lightweight, with tons of pop, super quick turn initiation, and excellent edge-hold once that edge is set, this ski has a super smooth feel. It prefers slalom turns, with such a sweet swingweight it almost arcs for you, and delivers a smooth, consistent, edge to arc contact with the snow. If you love hard snow and short turn precision, this is your ski.
FULL REVIEW

The new S/Max Blast from Salomon is a very fun, exciting new carving ski. Testers were thrilled by how well—and quickly—this ski can arc a perfect turn. Especially in the short swing. So much so, that a few rated this the best short turning ski in the Carving category. Like most of the skis in this class, it features a full sandwich sidewall construction for edge-hold and balance, as well as double titanium reinforcement for power and stability. It also adds something Salomon calls “Edge Amplifier,” a kind of design with more material under the boot and less toward the edges to increase the power you can exert over the grip and carve of the ski. While we may still be trying to figure out how to describe it, it does result in one of the smoothest, cleanest carving skis in the category.

This is not the most versatile carving ski, especially if you are looking for long, deep trenching performance. It’s also probably not the first ski you would strap into for your league races. Or for bombing groomers like you were running your own personal Super G race. But if you want to carve perfect turns on groomed runs on sunny days, or even with a little graupel blowing in, this is one of the funnest, easy-to-access high performing carving skis we tested this year.

It’s a little confusing to look at all of the test cards we fill out every year and see one of our largest, most East Coast-centric, ice eating testers of all time rating the Salomon S/Max Blast as his favorite carving ski. More flies for the honey, I guess, because even for a big bear of a tester like our ‘MC,’ this is one sweet turning ski. In the Overall classification, the ski earned 8s, 9s, and 10s across the board, and one lonely 6 from an ex East Coast racer who still wrote, “This ski will get traction back East.”

The Salomon Max Blast blew the test away in terms of responsiveness, ranking up there with the class winning Blizzard Firebird and incredibly active Rossignol Hero Elite. The ski earned 10s and 8s across the board, as well as one lone 6 for not exhibiting that same ease of use in longer turns. At the risk of being repetitive, this may be the easiest initiating, champagne bubble friendly carving skis we have ever tested, with a penchant for arcing picture perfect turns on hard snow.

Although the S/Max Blast got more 8s and 7s in the Stability classification, it did earn one 9 and one 10 on the high end of the scale. The smooth predictability of this ski in short swing turns makes for a fun, reliable ride. But you can also overpower it if you try to push it too hard in longer radius turns. As with many skis in this category, the mix of a traditional style wood core with two layers of metal provides a very stable feel.

Hold is also at a premium with the S/Max Blast, as it carves like a Ginsu knife on hard snow. This precision and arc of this are at or near the top of the class in this category, with only one tester rating it as low as a 6, and the rest giving it 8s and one 10 for how well it grabbed and continued to grip the snow.

Also a top ranking for the Salomon, Carving Pleasure is exactly that on this ski—a pleasure from turn to beautiful turn straight down the fall-line. It ranks right up there with the smoothing arcing Elan Black Edition and the category winning Blizzard Firebird, and will put a smile on the face of any hard snow skier who wants to spend a Saturday linking crisp slalom turns.

This is the one classification where the ski lost a few points due to its preference for shorter turns. The S/Max Blast earned a 4 and a couple of 6s at the low end, but also scored a couple 8s and even one 10 at the higher end from a skier who felt that once you dialed in this ski’s sweet spot you could still rocket down the hill.