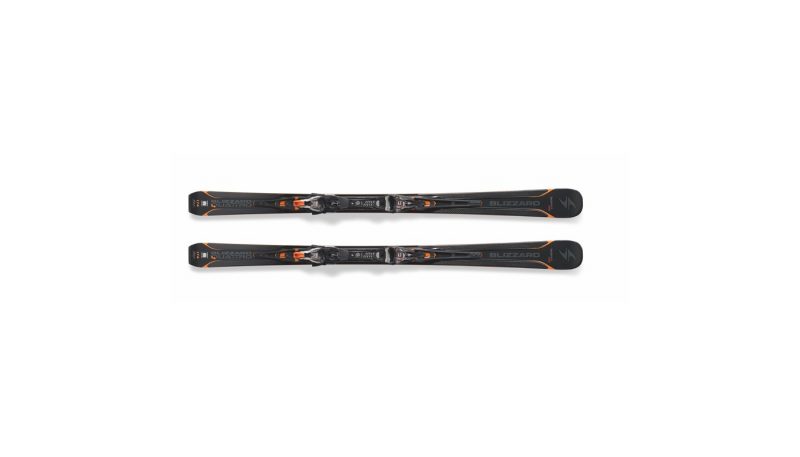 THE VERDICT
The Blizzard Quattro RX is an amazingly smooth, accurate, hardpack-specific carver with grip, especially in mid to long-radius turns. Built with Blizzard’s Sandwich Compound Sidewall IQ, the ski features a layup of wood, titanium and carbon for damp, consistent ski-to-snow contact, that is at its best on groomed and hard to icy conditions. An even, forgiving flex makes it an absolute pleasure to load the shovel of the ski from turn to turn, especially at higher speeds where the overall stability of the RX is positively confidence building. This is a “groomers-only” ski that loses performance off-piste and does feel out of its comfort zone in tighter turns. We highly recommend it for carvers who make an art out of arcing the groomed.
FULL REVIEW

Blizzard’s Quattro RX earned almost unanimous top scores for its Stability and Edge-hold from our entire test team. This is a ski that holds a turn very well, has great rhythm in GS turns, and is very stable at high speeds. Blizzard built the ski precisely for skiers who prefer groomers – or who at least want a designated hardpack ski – and not just for racers who ski every hill like it’s a World Cup slalom run. With that in mind, the Sandwich Compound Sidewall IQ construction (a sandwich layup of wood, titanium and carbon) results in some of the most even overall performance in the Carving Category, with a progressive shovel flex that makes it pure fun to initiate every turn. This is a gold standard groomer ski with a price tag to match that can make even the most diehard all-mountain skiers consider getting back to carving corduroy for a day, or at least a long afternoon.

The ski does not perform nearly as well anywhere off-piste, and frankly isn’t designed to be an all-mountain option. It feels resistant and planky if you try to force it into a shorter turn. It also can feel sluggish if you try to ski at slower speeds. Step on the gas and widen your arc, and the Quattro RX begins to unlock its abilities, offering velvet-smooth control and accuracy that is easy on the legs and almost meditative on the mind. This ski makes butter out of ice, and pure ice cream out of fresh groomed.

Overall scores for the Blizzard Quattro RX were 10s, 9s and 8s almost completely across the board (out of a possible high score of 10, with 16 testers on the ski), with only two testers ranking it as low as a 6, saying that it didn’t feel as if the Quattro had as much energy as a ski such as the Dynastar Speed Zone 12 Ti. The majority of testers ranked the ski as “Excellent,” including three who labeled it their “Favorite” in the Carving Category, with one tester recommending it for “anyone who wants to crush the front of the mountain and dust their friends.”

Scores in the Responsiveness Classification were also almost universal 10s, 9s and 8s, particularly among testers who like to ski wider arcs at higher speeds. Among the only two scores of 6 for Responsiveness one tester did remark that, “the ski needs speed to operate.” Along the lines of the majority who enjoyed the predictable manner in which the Quattro does initiate a turn, another tester wrote, “It makes it easy to commit to taking a faster line.”

No one questioned the Stability of the Quattro RX. In this classification, the quiet power and all-around authority of the ski earned only a couple of 8s as its lowest score, with the majority of testers giving the ski scores of 9s and 10s.

Ditto for high scores in the Edge-hold Classification. The IQ Construction makes it easy to get immediate edge contact at the initiation of each new arc, and to then hold that grip throughout the balance of each turn.

If you’re seeing a pattern here, it’s because there is one. There was one score of 6 in the Carving Pleasure Classification, from the same tester who felt the Quattro IQ lacked energy. Every other score was an 8 at the lowest, moving up to several 9s and 10s. As one tester remarked, “It feels like an all-mountain ski when you stand it. But it’s like a race ski when you start to carve.”

Turn Shape Variability was the one classification where the Quattro RX did not receive near-unanimous praise, specifically because the ski is not designed to make short swing turns. It is a highway roller with power and precision, and the kind of mid to high-speed stability that will keep you passing in the left lane.