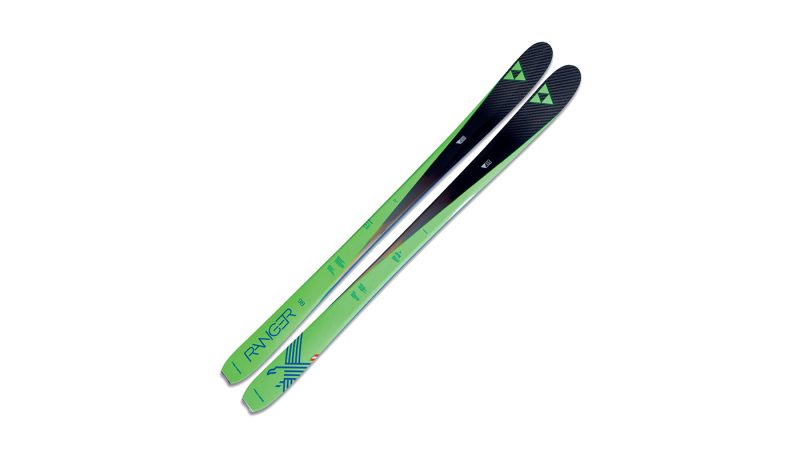 THE VERDICT
Fischer’s Ranger 98 Ti has the amazing ability to give you the confidence you get ripping groomers, even when you’re off-piste. This ski is super maneuverable, incredibly responsive, and lots of fun to ski, especially when you’re poking around in the bumps and trees. It’s not as confident on the groomed, and the lighter weight freaked a few testers out when they were mach-ing on hard snow back to the lift. Overall, the ease with which this ski performs should garner a serious look.
FULL REVIEW

Fischer’s Ranger Ti is one of the key examples of a new breed of lighter, easier to ski All Mountain models that are quite frankly surprisingly simple to arc in the kind of varied snow conditions that used to require a lot more work. Unlike the Pro MTN 95 Ti Fischer offered up in this category last season (which stood out for its stability, damp hold, and carving, particularly on hard snow surfaces), the Ranger 98 makes off-trail skiing simple, with big rewards for little effort.

Like “the Pro,” the Ranger features Fischer’s milled “Air Tec” wood-core, which reduces the ski’s weight and provides power with ease of use. Freeski Rocker provides a graduated tip initiation, and less of a raised tail so that you can keep hold of a turn at the exact moment you need to, rather than schmearing when you want to stay in an arc. It is the tips, however, that got the most “chatter” from our testers, who felt the lighter weight, in particular, weren’t as confident at higher speeds, especially on-piste. Probably the coolest thing we discovered in testing this ski was how well and how easily it made varied terrain feel super predictable. Just don’t expect that same level of high-speed groomer carving once you get back on the boilerplate.

The Ranger 98 Ti earned three scores of 10 (out of a possible 10) in the Overall Classification from testers who felt this would be the perfect All Mountain ski for lift-riders who spend the majority of their time riding off-piste. Its predictability, maneuverability, and ease of initiation make it perfect for exploring the trees and ripping soft bumps. On the lower end, the ski also saw a few 6s and 7s from testers who felt the tips could get chattery at higher speeds, and that the ski’s attributes lessened once they got it back on-piste.

High scores in the Responsiveness classification as well for a ski that reacts where and when you want it to, especially in tight chutes when you need to crank out some quick arcs. Along with the Dynastar Legend X96 and the super maneuverable Volkl Mantra, this is one of the most responsive skis we tested in the All Mountain Category. It did garner a couple of 6s and 7s at the lower end from testers who were disappointed in the ski’s hard snow performance. But the majority of our team gave the Ranger 98 Ti 8s, 9s, and 10s for easy it was to arc.

Stability was the classification where the Ranger 98 Ti got its most mixed marks. The lack of performance on hardpack, particularly at higher speeds where several testers said they basically didn’t have the confidence to really push the ski saw it receive several lower scores, including several 6s at the lower end. Testers who focused on the ski’s ability to make crud and mixed conditions feel like a Sunday drive in the country did reward the ski with some 8s, and a 9 and a 10 as its highest Stability marks.

This was a winning classification for the Ranger, as the ski had some of the best Float in the All Mountain Category. The Freeski Rocker design, which is a more gradual employment of rocker along the shovel, with little rocker in the tail, gives the ski a really nice progressive feel when initiating and entering a turn, which also results in a super smooth feel of control off-piste. The 98 Ti got several 10s and 9s here, with no tester giving it a score lower than an 8.

The ease of initiation and instant edge contact of the Ranger 98 Ti resulted in good scores in the Carving Classification for this ski, especially from testers who like to keep making technical, round turns off-piste. That the ski didn’t offer the same level of performance on harder snow, and at higher speeds, did earn it one 6 and a couple of 7s, but most of the scores here were 9s and 8s.