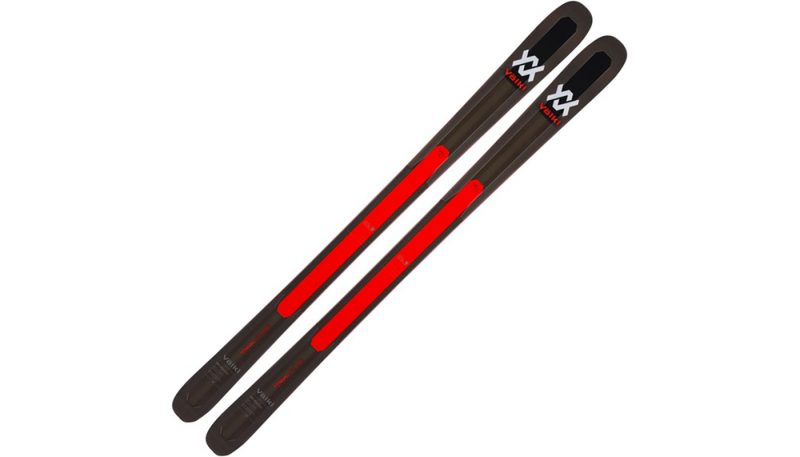 THE VERDICT
Volkl’s new M5 Mantra (marking the 5th iteration of the ground-breaking ski, which has continually ushered in another new era of All Mountain performance with less effort) won the All Mountain Category. Period. The majority of our testers wanted to ski the rest of the day on it, or the week, or the season, dropping over the ridge to Alta on the test models with a wave and a nod, and a quick, “Yeah, I’m good.” This is the new benchmark for high-performance multi-condition skis.
FULL REVIEW

The Mantra has been such a standard of All Mountain performance over the years that you could imagine the cliché, “Locals on Volkls,” is the second thing you say after, “No friends on a powder day,” when you check into your first meeting at Deep Snow Addicts Anonymous. And truth be told, Mantras could very well have carved more big lines under the feet of more great skiers than almost any other pair of boards on the planet (easy there Rossi 7 skiers, I said “almost.”) The amazing thing about the new M5 is how much its all-terrain performance is going to continue to thrill the experts who already love the ski, while also providing breakthrough technology for advanced skiers and even goal-oriented intermediates.

Much of that is due to the Titanal Frame Technology, something Volkl continues perfecting in several of its models, which provides more material and power where you need it, such as in the ‘cockpit’ of the ski behind and in front of the boot, with less material where you don’t. This results in such a light ski, that frankly, it freaked a few testers out. At first, they missed the ‘bulk’ that has often defined All Mountain boards, then realized how well the M5 worked. Everywhere they took it! A lively mix of tip and tail rocker, a full Multi-Layer Wood Core (beech and poplar), and carbon tips round out the recipe to this ski’s amazing All Mountain performance.

The only time Volkl’s M5 Mantra didn’t score a 10 (out of a possible 10) in the Overall Classification of the All Mountain Category, was when it was ranking a 9 or 8 (and one 6, from a tester who said he would’ve liked more “pop.”). More than 50 percent of our test team ranked this ski their “Favorite,” and the other 50 percent said it was “Excellent.” Why such a unanimous result? Because whatever kind of turn or type of condition our varied mix of testers preferred to ski, the M5 crushed it so easily that at least once every one of us looked down at the snow and said, “Did I just do that?”

With all the hype here about how much of a high-powered Swiss Army Knife of skiing the M5 Mantra is, the Responsiveness Classification is where the ski got its most mixed marks. It still earned 10s on more than 50 percent of our tester’s cards but also got a few 8s and even three 6s. “It’s a little too damp,” or even “Torpid at times when you aren’t paying attention,” were the reasons given for the lower marks.

Given how much control you can have on the M5 while ripping down a steep face while wondering what to have for lunch, there was no score lower than a 7 in the Stability Classification, with lots of 10s and 9s, and a couple of 8s. As mentioned in the Full Review, such lightweight response may take a little getting used to, as some testers said rocking tight slalom turns on the M5s took a very slight adjustment.

For Resort Float, the M5 did not earn any 10s, but it did accumulate a steady score sheet of 9s and 8s, as well as a couple 6s, as a result of the over-riding dampness of the ski that on initiation took away any sense of “Pop!” The majority of our crew felt the progressive tip rocker and the much lighter feel of the Titanal Frame create such increased maneuverability, that you can easily lay the Mantra into a confident arc anywhere you want.

It was really cool to see and hear how many different kinds of carving techniques our team got to explore while testing the Mantra. Whether it was GS style round turns at an increasingly longer radius, high-speed Super G arcs with your knees near your chest, or even a synchro set, back and forth from long to short, the M5’s amazing initiation, edge-hold, and confidence, were a reminder of one simple pearl of outdoor product wisdom: better performance = more fun!