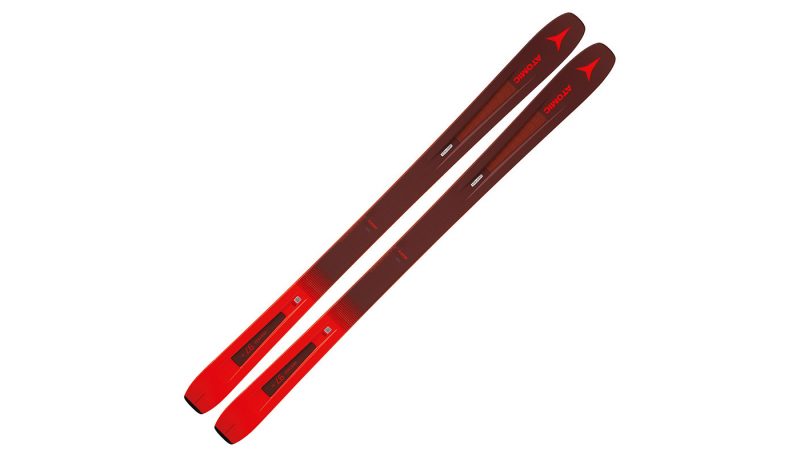 THE VERDICT
Atomic’s Vantage 97 TI received “Excellent” to “Favorite” ratings from a majority of testers for its confidence on big terrain. Featuring a welcome mix of superior Stability and excellent edge-hold, the ski can maintain great ski to snow contact, even in mixed conditions like crud and wind-pack. Which is good, because the one thing the ski lacked in this category was an ability to Float. Buy this ski to for a go-to board that can handle pretty much anything from off-piste to groomed, and which will still be your top choice when you wake up to a few of inches of fresh.
FULL REVIEW

Starting with Atomic’s Prolite Construction for a slimmer, lighter profile which also features the brand’s Energy Backbone, including a Titanium Tank Mesh for power and dampening, the Vantage 97 TI has a strength and hold that is easy to access. It handles very well in a variety of off-piste conditions, where it can carve with authority – even in mixed snow and wind chop. A Power Woodcore and full sidewalls give the ski a friendly, familiar GS feel, but without the feeling like you have to be going 50 miles per hour while loading up the shovel to make it work. Most surprising in this category was how well the ski maintained that feel whether our testers were arcing down the groomed or dropping into windblown powder off the Road to Provo catwalk.

This is a high-performance ski that rewards technically sound skiers. One tester remarked that it might be too aggressive for intermediates and “put them in the backseat.” Despite featuring 15 percent tip rocker, it also felt like it didn’t have as much Float as other skis in this category, especially when compared to something like the Black Crows Daemon. If you want to make shorter turns with easier initiation in your All Mountain setup, you’re better off looking somewhere else. If you like to carve with power everywhere you ski, the Vantage 97 TI is an excellent choice.

The Vantage 97 TI earned a handful of 10s (out of a possible 10) in the Overall Classification of our All Mountain tests, with two members of our team saying the ski was their “Favorite.” On the lower end, the ski also had a couple of 6s from testers who would’ve preferred it if the ski could also make short turns and, at least in the powder, exhibited more Float. Most of the testers gave this ski a solid 8.

If you want a ski that makes almost effortless carves in just about any condition other than blower powder or black ice, the Vantage 97 TI is going to earn high Responsiveness marks. If you prefer short swing turns and zipper lines straight down the bumps or in the chutes, then probably not so much. Which explains why more than half our testers gave the ski 9s and 8s in this classification, and the rest gave it a 7 or 6, and even a 5 on one test sheet. This is more a GS skier’s board than it is for anyone who wants more of a freestyle feel underfoot.

Along with the Carving Classification, Stability is one place where the Vantage 97 TI really stood out. This ski has a wonderfully calm “I’ve got this covered” feel underfoot, even when you’re absolutely mach-ing through crud and wind-pack. The ski earned 8s, 9s, and 10s (and two 7s at the lower end) across the board for its damp, vibration-free performance. Bottom line: the Energy Backbone and Titanium Tank Mesh really work.

On the other hand, the Vantage 97 TI did not do nearly as well in terms of Resort Float. As mentioned in the Full Review (see above), despite featuring 15 percent tip rocker, this ski still feels like a GS carver with attitude more than it does a freestyle floater with pop. Although it did earn one 10 from a tester who rated it his favorite, as well as a couple of 8s, most testers ranked the ski a 6 in this classification, while it even got a 4 on a couple of test sheets.

Like Stability, Carving is another place where the Vantage 97 TI really stood out. It’s easy to get on edge, even easier to keep on edge, and makes a wonderfully smooth carve whether you take it on or off-piste. It’s not a great short turner, but at medium and long radius turns it flat out rocks. The ski earned several 10s in this classification, and nothing lower than an 8.