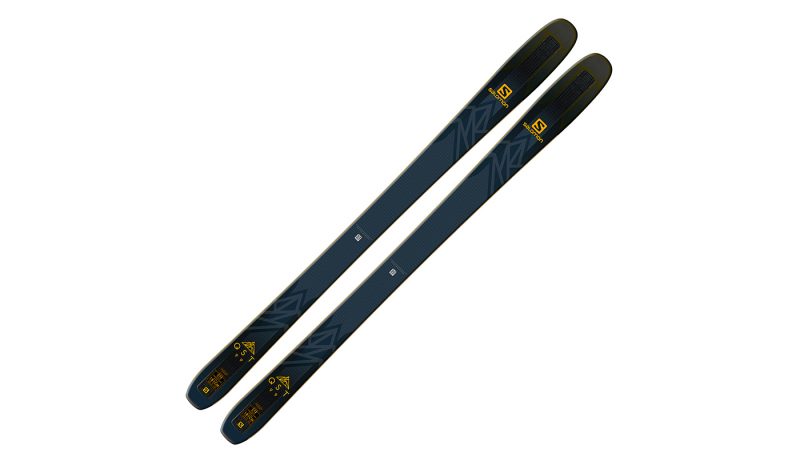 THE VERDICT
Already considered an All Mountain ripper for skiers who prefer to do their lift-served shredding off-piste in last season’s test, this year’s QST 99 got an offseason upgrade, with the newest edition Salomon’s C/FX Superfiber construction (carbon stringers interwoven with flax). The result is a ski that still slays it in mixed snow conditions, but now also features better hard snow performance, where it was damp, accurate, and much easier to edge. The ski prefers medium- to large-radius turns and is definitely confident eating up terrain at higher speeds. But now it offers more all-terrain performance for a much wider array of skier types.
FULL REVIEW

The big offseason news for Salomon’s popular QST line was the incorporation of the brand’s newest iteration of C/FX Superfiber construction (CF/X 3), which also includes a Basalt fiber layer running the length of the ski for increased dampening. In our estimation, it also includes an added dimension of all-terrain performance. Where last year we found this to be a ski that performed great off-piste but felt a little more sluggish and surfy on hard snow, now it’s much easier to grab and keep hold of an edge.

The ski still features the same dimensions, as well as All-Terrain Rocker 2.0, with pronounced tip rise and a moderately upturned tail, which makes it especially easy to initiate on any snow surface. While Salomon’s “Carve Zone” camber, comprising 70 percent of the surface area between the tip and tail, results in an exceptional grip. Surprisingly to us, rather than turning the QST into a kind of off-piste cruising machine, the extra power and control made it feel more playful while ratcheting up its response and ease of use on groomers and bumps. Granted, this is still a ski that excels at medium radius turns and at higher speeds. It’s just now a ski that readily transitions from crud buster to carver, and from slarve to arc. As one tester put it, “It feels bigger in pow, and narrower on-piste.”

Overall scores for the new, improved Salomon QST 99 rose as a result of its increased power and its increased playfulness. Whereas last year the ski’s highest rank was an 8 in the Overall Classification, this year it earned some 10s and 9s, along with several 8s, as well as one 6 from a tester who felt the ski is still too damp. No longer just a pair of pretty boards for noodling around on windblown powder, the muscled-up 99 can now handle anything from softer groomers to cut-up crud.

As noted in the full review, increased power led to increased Responsiveness. The new 99 can not only initiate more easily, and confidently, on harder snow conditions, it also doesn’t lose any performance when you get it up to speed off-piste. The ski did get as low as a 7 in this classification, along with several 8s, one 9, and two 10s. Interestingly, while it’s still more of a foot-steering ski that you angle or edge at each initiation, rather than transfer on an upweight, that actually makes it feel remarkably serene as you gradually load each outside ski down the slope.

As with last year, this was the one characteristic that earned the Salomon QST 99 its highest marks, thanks to the carbon stringers, Titanal insert, and Elastomer dampers that are critical to this ski’s smoothness, and the new tip-to-tail layer of Basalt. One tester called it this category’s “Easy Rider,” while another said, “It was a pleasure to enjoy its solid All Mountain performance. “That’s why we’re repeating last year’s findings, and adding an explanation point: “The Stability is excellent.”

This was another relatively high scoring classification for the Salomon QST 99, augmented by the extra rocker in the All-Terrain Rocker 2.0 design, and also the extended sidecut of the Carve Zone camber construction, which off-piste, makes this ski exceptionally easy to get – and keep – on edge. It’s also an area that saw a slight improvement across the board. Given the ski’s drastic rise in on-piste performance, it was reassuring to note that it also didn’t give up any of its existing ability and aplomb when we went to ride it hard off-piste.

Last year, a couple of testers gave the QST 99 scores of 10 (out of a possible 10) in the Carving Classification, with the caveat that they would only have to “carve” it off-piste. And while the ski only got two 10 in this classification this year as well, it also received a lot more 9s and 8s for how well it could initiate, hold, and exit an arc without feeling like you were forcing it into a shorter or longer prescribed turn radius. Nice job, Salomon. You made a very smooth turning All-Mountain ski that anyone who isn’t carving on ice could ride every day on the lifts.