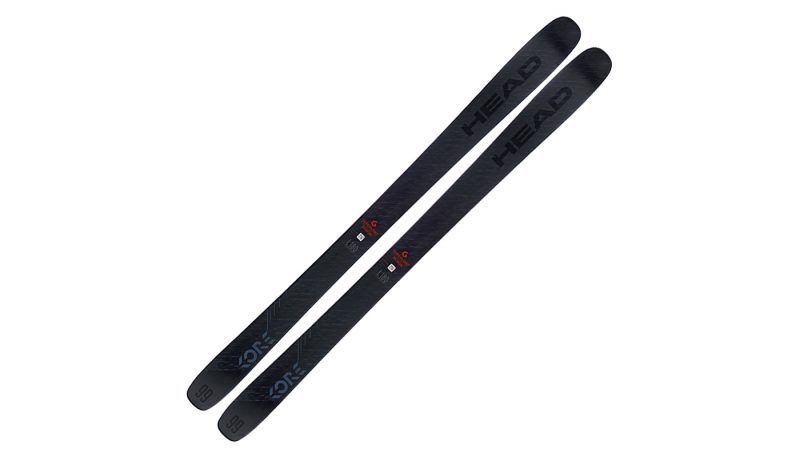 THE VERDICT
Head’s Kore 99 delivers strong, stable, confidence-building All Mountain performance, particularly if you ski primarily off-piste. The added waist width of the 99-millimeter design (Head had us test the 93-millimeter waist width in this category last season) provided the extra bit of light powder/crud/mixed condition performance testers asked for, and it showed in the positive results. This is a very damp ski that can feel sluggish on the hardpack, but it absolutely rules – and rips – on every other kind of condition where we tested it.
FULL REVIEW

Head’s Kore 99, much like the Kore 93, which we tested in this category last season, is one of the lightest skis in the category by utilizing unique, weight-shaving materials such as Graphene, Koroyd, and Head’s “Topsheet Free Construction,” which eliminates the traditional plastic topsheet. It also features Carbon Fiber Construction and Karuba wood core for power and dampness, along with a mix of rocker and camber for ease of initiation off-piste. What was most surprising to our testers was how much power this ski packs into such a lightweight setup. This an uber stable ski that blast through crud and which, as one tester noted, “Is happy to go fast.”

It’s not a ski that provides a lot of feedback or pop, and on harder, groomed snow, felt a bit heavy and dead, especially at slower speeds and in shorter turn shapes. As one tester said, “Playful and lively are not words I would use to describe this.” What the ski does exceptionally well – and maybe better than any other ski in this category outside of the Blizzard Bonafide – is eat up big terrain with smooth handling power that is easy to access. The more mixed the conditions, the more obvious what kind of punch the Kore 99 can pack. This is an excellent quiver ski for good to great days on the mountain, as well as a go-to ski for pass holders who only ski the groomers at the end of each run, on the way back to the lift.

Our bigger, heavier testers tended to give the Kore 99 its better results in the Overall Classification, rewarding its power and ability to blow through mixed conditions without a shrug, with scores of 8, 9, and two 10s (out of a possible 10). Because of this ski’s lightweight, they said they could easily see skiing the Kore 99 on a regular basis, especially if they were hitting bigger hills like Snowbird, Big Sky, or Taos. Some of the lighter testers, and testers who like making shorter turns, and also wanted more hard snow performance, gave the ski a 6.

This was the lowest scoring classification for the Kore 99 as the ski really doesn’t have any sense of playfulness or pop. Trying to make short turns is certainly doable given the tip rocker and lighter weight, but it’s not something you would want to make the ski perform on a regular basis. Get the 99 up to speed, and off-piste, and it absolutely rocks. Get it on hard snow, or in a tight chute, and you’ll feel more like you’re making platform, step turns, rather than laying down smooth consecutive arcs.

Stability, on the other hand, is through the roof. The Kore 99 is unshakeable, especially in off-piste conditions, where the ski’s dampness absolutely irons out any variables in the snowpack. The 99 grabbed no less than seven 10s in this classification, and nothing less than an 8. No matter how much we pushed it on Snowbird’s big bowls off Road to Provo and down Mineral Basin, we could not find a speed limit. As several testers remarked, “It’s hard to believe a ski with this much power can be this light.”

Unlike last season, when the testers thought the Kore 93’s biggest problem with being in the All Mountain Category was a distinct lack of Float, the 99 provided just enough rocker with a slightly wider 134-millimeter tip than the 93 to porpoise through any crud or windblown that the power of this didn’t just obliterate. If you ride big terrain on a daily basis and like to go fast, the Kore 99 will notch your fun ticket.

Given the Kore 99’s relatively lackluster results in the Responsiveness Classification, it was a little surprising to see the ski get such strong Carving results. Granted, the ski did garner two 6s at the lower end, but the rest of our test team gave it 7s, 8s, 9s, and a couple of 10s at the top. That’s because once this ski is on edge – where it prefers to be – it’s all but impossible to knock it off track. Playful? No. Great grip and hold? Heck yes!