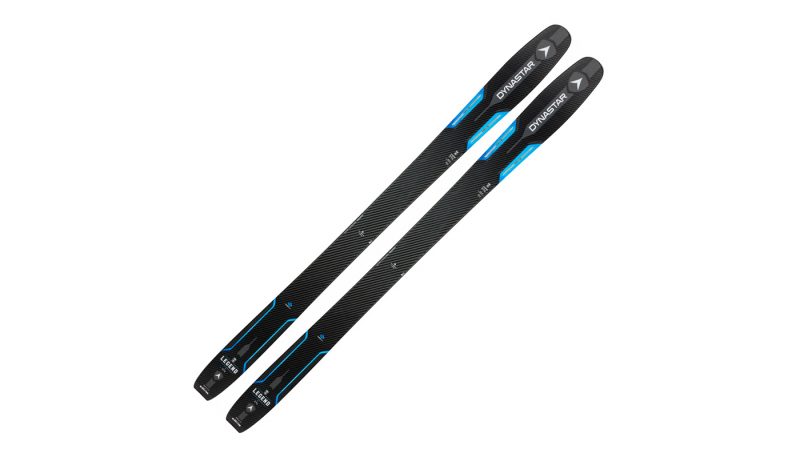 THE VERDICT
In the Legend X96, Dynastar’s All Mountain Profile, with a five-point sidecut and moderate tip and tail rocker, results in a ski that quickly grabs hold of a carve, particularly on light powder or wind-pack conditions, and also on the hardpack. The ski earned high scores for its Responsiveness and for its Carving, although some testers felt it performed better on-piste than off. Tested last year in the Powder Category, where you could easily ride it all season in most lift-served conditions.
FULL REVIEW

Dynastar’s Legend X96 has remarkable quickness and control from edge-to-edge. It absolutely carves up the fall-line, particularly in steep terrain, where it is stable and confident. Thanks to Dynastar’s All Mountain profile, with tip and tail rocker and five-point sidecut, the ski engages quickly with great edge grip. It earned great scores for Carving and Responsiveness. With a 96-millimeter waist width, the Legend was one of the narrowest skis in the Powder Category, where Dynastar asked us to test the boards last season, prompting us to comment that it actually felt more suited to being used as an exceptionally versatile All Mountain, which is where we tested it this season. The ski can certainly handle all lift-served terrain and excels attacking the fall-line in the steeps.

The ski does have to be on edge for its best performance, and like other Dynastar Legends, we tested, its easy swing-weight could lead some hard-charging to say it felt a little short. Also, scores in the Resort Float classification were where the ski saw its lowest results. We recommend the Legend X96 for true All Mountain use, as a versatile, harder-snow-preferring ski that can else keep edging off-piste.

Placing the Legend X96 in the All Mountain Category drastically improved its Overall scores. While the ski earned one 8 (out of a possible 10), and a majority of 6s in the Powder Category last season, here the ski earned a majority of 8s, a couple of 9s and 10s, and only two 6s from testers who felt the ski was still more of a firm snow carver than a true All Mountain machine. The ski also earned several “Excellent” rankings, and even one “Favorite” ranking from one of the most precise skiers on our test team, who lauded the ski’s excellent edge hold and immediate response.

This was one classification where the Legend X96 earned top to sometimes perfect marks. The ski is so quick edge-to-edge, so easy to initiate, and will grab hold of an arc so early in each turn, that testers wanted to attack steep fall-line terrain and keep bending these boards right and left. While earning a handful of perfect 10s, and several 9s and 8s, the ski had only two scores as low as 6, from testers who preferred more classic GS style turns (the short, accurate turn is this ski’s forte), and a ski that was better suited to spending the majority of its time off-piste. For pure energy and carving, this is one of the better skis in the test.

Scores for Stability were a little bit more varied when it came to the Legend X96. Testers who ranked this ski as their “Favorite” or “Excellent” gave it 10s, 9s, and a couple 8s, and commented on how confident and reliable it felt charged straight down the center of the slope. Other testers, who as mentioned above wanted more of a GS feel, and also wanted a ski that was better suited to making longer turns, gave the ski rankings as low as a 2 in one case, saying it felt squirrely in the crud, especially at higher speeds. The average score for Stability was a 7.

As when the ski was tested in the Powder Category last season, Float, or in this case “Resort Float,” was the classification where it faired the worst. The X96 did grab a couple of 8s and quite a few 7s for its ability to continue making zipper turns straight down anything – from steeps to trees to bumps – but also ended up with a couple scores as low as a 2 or 3 from testers who felt cut up snow and crud could just push it around too much.

Carving is the classification where the X96 was at its best. Even testers who wanted more of a GS feel admitted that this ski is excellent at laying quick, tight trenches wherever you take it. If you love the feeling of easily making accurate turns all over the mountain, this is a perfect fit.