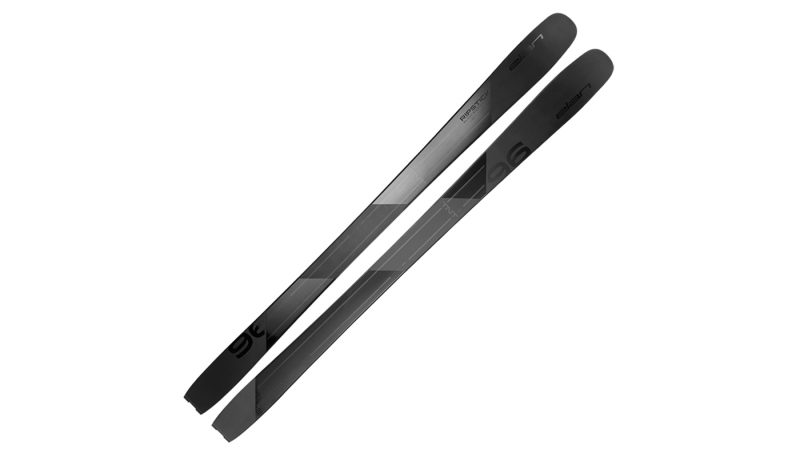 THE VERDICT
Last year we said, “The Elan Ripstick 96 is the purest, most accurate carving ski in the All Mountain Category of the Gear Institute Ski Test.” That was before Elan added a lighter, increasingly stable carbon construction (i.e., the “Black Edition”) to Amphibio Technology (a specific left and right ski with camber for hold on the inside of each tip, and rocker on the outside for ease of initiation), which makes it amazingly easy to carve medium to short-radius turns that it’s practically automatic. Along with a “Tubelite Woodcore” inserted into the wood to provide power and an even flex, the Black Edition 96 offers effortless carve and superior grip.
FULL REVIEW

Combining Elan’s new “Black Edition” carbon construction for lighter weight, less vibrations, and an amazingly buttery sense of constant ski-to-snow contact with Elan’s Amphibio Technology, results in an All Mountain ski with a smooth sense of authority that is easy to access. The asymmetrical ski design, with dedicated left and right skis featuring camber on the inside edge for grip and control, and rocker on the outside edge for ease of initiation, creates an equal mix of perfect swing-weight and rock-solid hold. As was the case last year, this is one of the best pure Carving skis in the All Mountain Category, albeit now with more power and stability for heading off-piste.

The most notable difference over last year’s ski is that the new Black Edition maintains a superlight feel without giving up any power, accuracy, or ability to flat out blow through some chop. The ski still has all the calm, accurate, wonderfully rhythmic feel of its predecessor, while adding a new quiver of all-terrain ability that makes it a great choice for pass holders on any coast. Or in the quotes of many of the testers, “It’s the ski of the day,” “It has a super smooth flex,” “Gold medal turn initiation,” and “It’s easy to ski and it rips.”

The new Black Edition of the Ripstick 96 earned several 10s (out of a possible 10) in the Overall Classification, 9s, 8s, and even a couple of 6s from a handful of testers who still think the ski doesn’t have the kind of “rock and roll” feel they want. It also grabbed a couple of “Favorite” rankings, plenty of “Excellents,” and a couple of “Goods” from the same testers who wanted more action and pop underfoot. The consensus? The ski’s better off-piste attributes increased power without increased weight, and ability to charge without feeling like it’s working too hard equal a definite upgrade for a ski that last year we named the number carver in this class.

As per last year, the Elan Ripstick 96 Black Edition earned top scores for its Responsiveness. The Amphibio Technology shows its quality in groomed and hard snow carving, where the asymmetrical skis make getting into and out of a turn absolutely automatic. Along with the TNT Technology, the new carbon construction ensures a smooth, even shovel flex, with a lightweight feel arc after arc.

Unlike last year, where stability was the only classification where the Ripstick 96 got varied results, the new Black Edition saw only two scores of 4 at the lowest end, then several 8s and even three 10s for how confident and grounded it felt underfoot. This is a ski that offers command, confidence, and a reliably smooth turn initiation and holds without ever making you feel like you’re working to obtain it. Really, one of the best upgrades to an existing ski we saw this season (along with the new Rossignol Experience line and the new Volkl Mantra, which ran away with this class).

This is where the Black Edition of the Ripstick 96 saw the greatest improvement. While the Amphibio Technology certainly goes a long way toward easing the ski’s initiation, these boards felt like more of a pure carver with some off-piste ability in the past. Now, despite a couple scores of 5 and 6, the ski’s overall performance in all conditions also saw it earning more 8s and a handful of 10s for how easy it was to maneuver off-piste.

As noted, last year the Elan Ripstick 96 was the best carver in the All Mountain Category. This year, a couple skis like the Dynastar X96 and brand new Volkl Mantra are challenging that. But the Elan Ripstick 96 is still one of the best pure carving ski in the All Mountain Category. Once you start angling this ski into a series of satisfying arcs, you won’t want to stop.