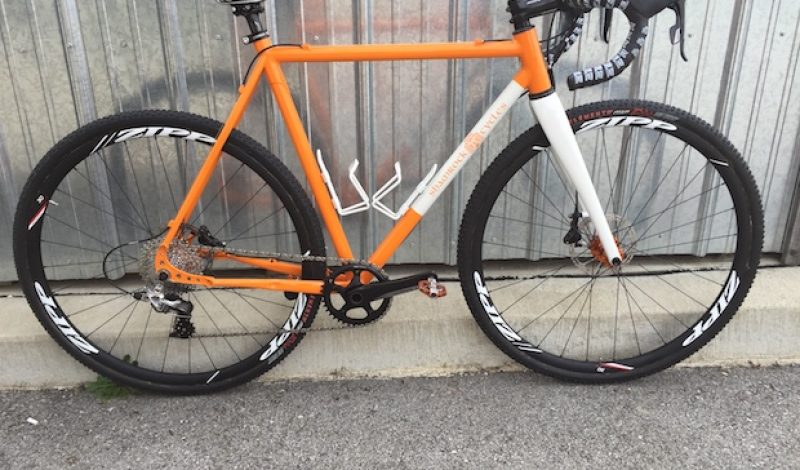 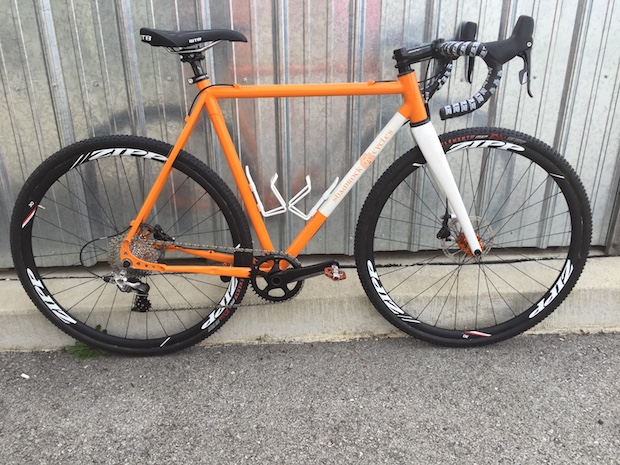 I’ve known Shamrock Cycles builder Tim O’Donnell for years. Even if we weren’t friends, I would still lust after his custom steel steeds that bicycle nerds have drooled over for the past decade.

I first worked with Tim about five years ago, when he built me a gorgeous Campagnolo-equipped travel bike that was exhibited at the National Hand Built Bicycle Show in Charlotte. Since then I’ve ridden it around the US and Europe, and it never fails to receive enthusiastic compliments from other riders.

Like many builders, O’Donnell, takes photos of the frame throughout the build process. A big part of that process is watching the frame grow from a few unmitered steel tubes laying in a box to a polished, functional work of art. Every few weeks, Tim invited me by to witness the bike emerge from its caterpillar stages into the gorgeous orange butterfly.

Let’s be honest, unless you’re on the very edges of the bell curve when it comes to weight, height, or physical capabilities, you can likely find an off-the-rack bike that will work pretty well for you and your abilities. Playing around with saddle height and stem and crank arm length, you can dial the fit even further. But there’s something to be said for a bike that’s built exactly for you and you alone. When I hopped onto that custom travel bike for the first time, it felt like I was sinking into my favorite, well-worn chair. Getting into my drops, I didn’t feel uncomfortable or overextended; I was exactly where I needed to be.

A custom bike won’t magically make you into Jeremy Powers – O’Donnell would have done that for himself a long time ago, he jokes – but a properly built one will put you in the best position for success. 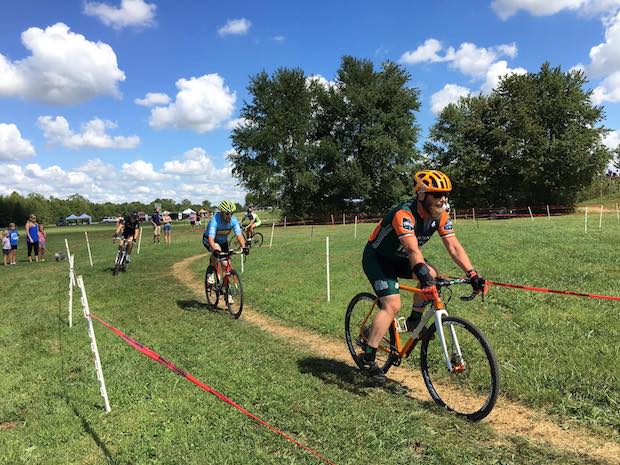 “Riders that I know, I know their strengths and weaknesses and can build a bike with those in mind,” O’Donnell said. “It won’t automatically make you a better rider, but I can take away some of those things that make you a worse rider.”

For a cyclist who goes full gas into the turns, grabs the brakes hard, then accelerates out, O’Donnell builds a frame with a shorter wheelbase, a steeper head angle and less trail, making it easier to navigate the bike through turns at a high rate of speed. On the other hand, racers who prefer to bunnyhop barriers get shorter chainstays that allow them to better lift their front wheel over obstacles.

After riding with me and watching me compete for a few seasons, O’Donnell had my number as a racer, one who relies on power to overtake and outlast my fellow Cat 3 masters. (As you can tell by my race results this past year, that doesn’t happen often.) For my first CX bike, O’Donnell and I sat around his dining room table with a couple of beers, while he walked me through the BikeCAD sketch and the various numbers. For my second bike, the design was refined even more.

“Your riding style is more about speed in a straight line so (for your new bike) I wanted to maximize that even more for you,” O’Donnell said. “I gave you a little more front to center length in the wheelbase to reduce toe overlap and a little longer trail to make the bike more stable at speed.”

During the John Bryan OVCX race a couple of years ago, I was bunnyhopping a log each lap, until I came in too hot toward the end of the race and crashed straight into it, breaking both my finger and my fork. I managed to finish the race, even with the fort bent back so far that I couldn’t turn more than 40 degrees without hitting the deck. Two days later, O’Donnell built me a new fork so I wouldn’t miss the next race.

Knowing my propensity for crashing, for my new bike, O’Donnell used a used a Verus top tube, which is a little heavier, but also thicker to resist denting. Most of the remaining tubes – Columbus 34.9 8/5/8 double-butted down tube, Columbus 30-16 oval chain stays, Columbus 16mm seat stays, and a Columbus 28.6 8/6/8 double butted top tube that he reams for a 27.2 seat post – are a bit larger in diameter to stiffen up the front end and keep it tracking better in the choppy sections. 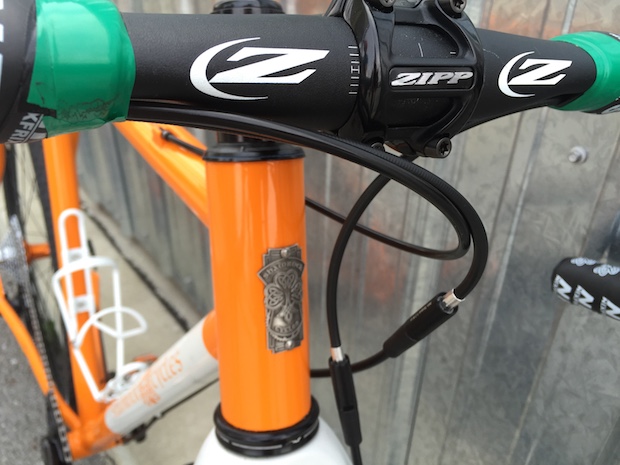 With clients he might not know as well, O’Donnell asks about their riding history and the bikes they’ve loved the most. Even many experienced racers, O’Donnell said, don’t realize what attributes of their previous bikes translate into success on the course.

“Most racers respond to fit more than feel, which is much more subjective,” O’Donnell said. “They could be riding a bike that’s ill-suited for their strengths, but they don’t realize it because the fit is correct.”

Unless there’s something that’s completely off with a racer’s current bike, O’Donnell will attempt to match the fit, so there’s continuity between their new custom bike and the older bike, which will likely become their pit bike.

O’Donnell can be a bit of a traditionalist at times and isn’t afraid to offer his opinions, which has grated a few customers the wrong way over the years. Greg Dyas has worked with O’Donnell twice, once on a CX bike two years ago and once on a stainless steel gravel bike that will be unveiled at this year’s NAHBS. He was surprised by the amount of pushback he received from O’Donnell during the concept phase.

“You’d think you’re the customer and you’re paying, but O’Donnell will probe you to justify what you want, especially if he’s seeing unusual requests or demands,” Dyas said. “He’ll want to talk with you about why specifically you feel you need thru-axle dropouts on your disc road bike. ‘Quick-releases have worked fine since Campagnolo invented them. Do you have an actual need or are you just rolling with a trend that could leave you dissatisfied or annoyed with the frame a couple years from now? Have you considered other options?’ It leads to really good, thoughtful conversations that results in you getting a bike that has all of that thought behind it.”

Dyas estimates he and O’Donnell exchanged more than a hundred messages on e-mail and instant messenger discussing options on each bike, in addition to talking it over at length in person.

This past season, I was coming off an injury and too many beer and restaurant reviews; it was an absolutely embarrassing shitshow. I plan on taking training much more seriously this coming year, but unless I get supplement advice from Armstrong, Landis and Danielson, or borrow Femke Van den Driessche’s seat-tube motor, I’m still not likely to land on the steps of an OVCX master’s podium. And as awesome as my newest custom Shamrock is, even O’Donnell admits it’s not going to automatically move me up 30 places in a race. So you’d be right to ask, why bother?

I often joke that the amount I crash during the season, I need the sturdiest steel frame money can buy. But in all honesty, the bikes are just plain cool; they look as great as they ride. On top of that, I was able to choose a mixture of components that I loved and built up the bike exactly the way I wanted. I like taking it out for a gravel ride in the offseason and having a complete stranger “ooohh” and “aaahh” over the expert welding or my custom Zipp 30 Course wheelset with I9 thru-axle hubs. This bike is unique to me and me alone, and I love that. 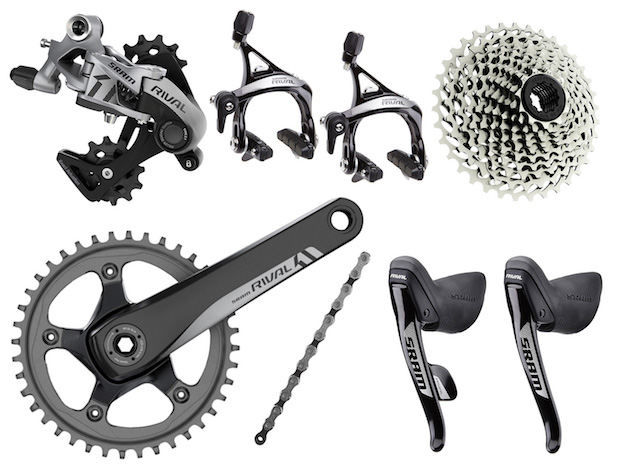 Cockpit – Supporting the local community is important to me, and Zipp and their parent company SRAM have been a major part of the Indianapolis cycling scene for years. But even more importantly, they make bombproof products that perform well, especially under duress. The seatpost, stem and handlebars are all from Zipp’s affordable alloy Service Course line. The bars are wrapped with custom Shamrock bar tape from Nixfrixshun.

SRAM Rival 1 Groupset – I had the first generation Force CX1 on my previous ride. Racing a steel bike, I was less concerned about the weight savings as I was about not losing my chain after crashing. In the last two years, I’ve lost count of the number of crashes I’ve had, but I’ve dropped my chain a grand total of one time. The new Rival groupset promised similar performance with a slight weight penalty for a more affordable price. After racing it for a season, I completely agree. I was impressed with how well it worked, even in muddy conditions. 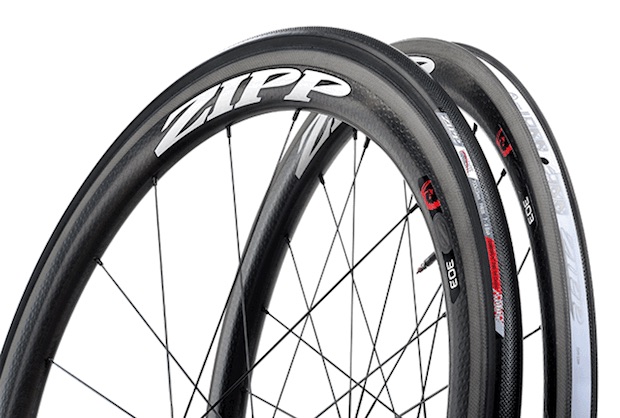 Custom Wheelset (Industry Nine Torch Classic disc hubs laced to Zipp 30 Course rims, with DT Comp spokes and DT Swiss HexHead alloy nipples) – I raced on Zipp carbon 303s for a couple of years, but was always afraid of cracking them and then having my wife break me in half too. So teammate and expert wheelbuilder Will Sherman built me a wheelset that’s tough, relatively economical and much faster than I currently deserve. Zipp’s latest rims offer the same 25mm external width and toroidal shape as their carbon rims, but in a tough alloy version. The Industry Nine thru-axle hubs offer both low drag and weight, and a lot of performance. The Teflon-sealed endcaps protect the hubs from both mud and water, which play havoc on bearings.

I went with two wheelsets, one tubular set mated with Clement MXP tires that were my primary racing wheels, and one tubeless set that – depending on my needs and the weather – I alternated between. Those included the Challenge Limus mud tires and Chicane file treads.

WTB Rocket Pro 150 Saddle – I’ve used Fizik Arione saddles for years, but during a bike fit this year, it was suggested I try a slightly wider saddle to better accommodate my sit bones. I went with the WTB Rocket Pro 150, and to be honest I didn’t notice a massive difference between the two, and my wide butt never felt uncomfortable.