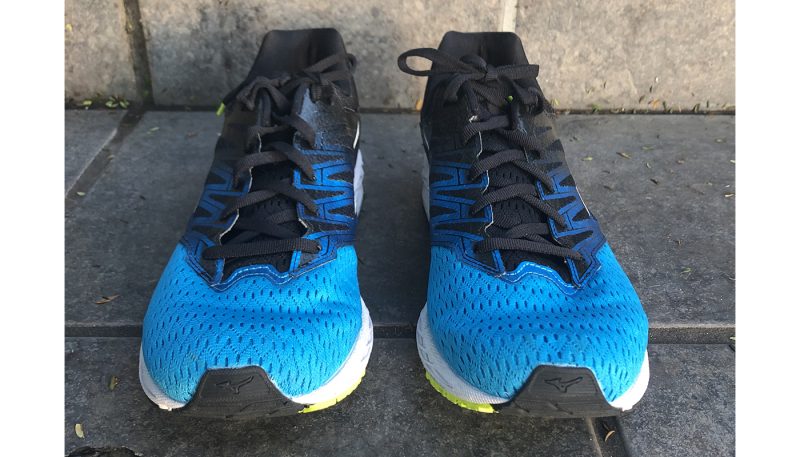 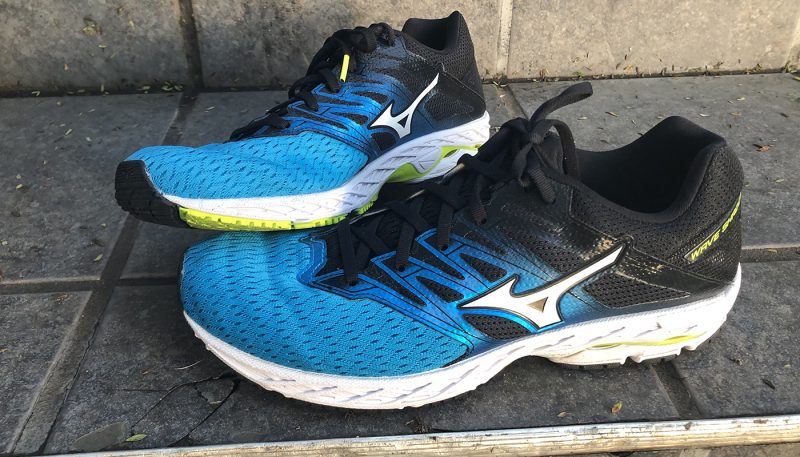 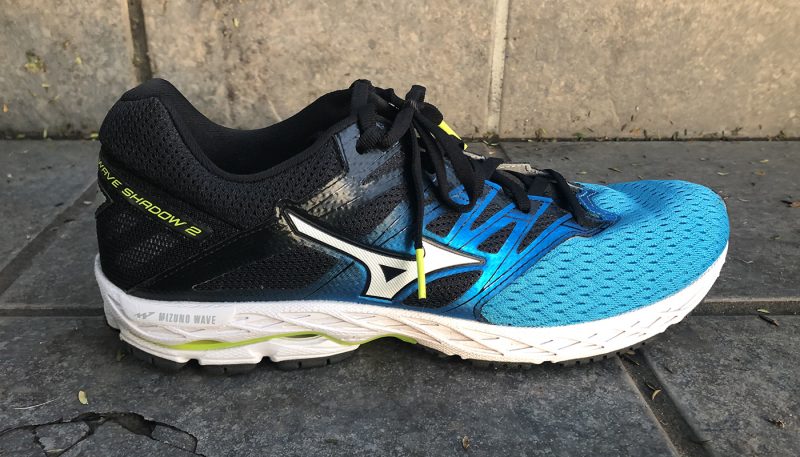 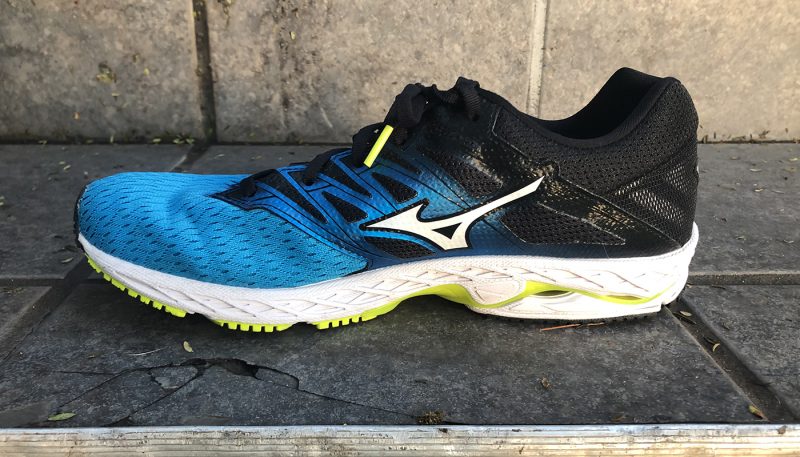 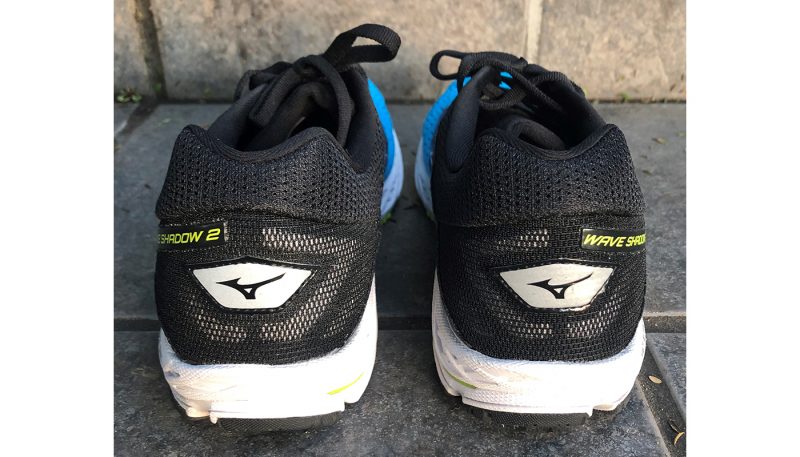 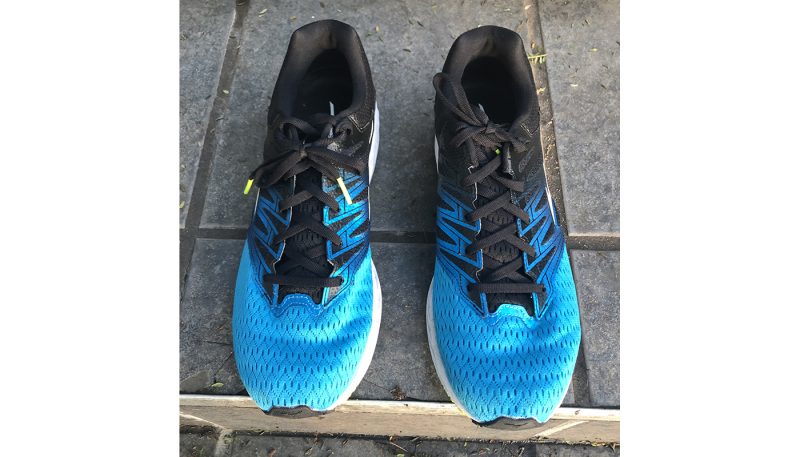 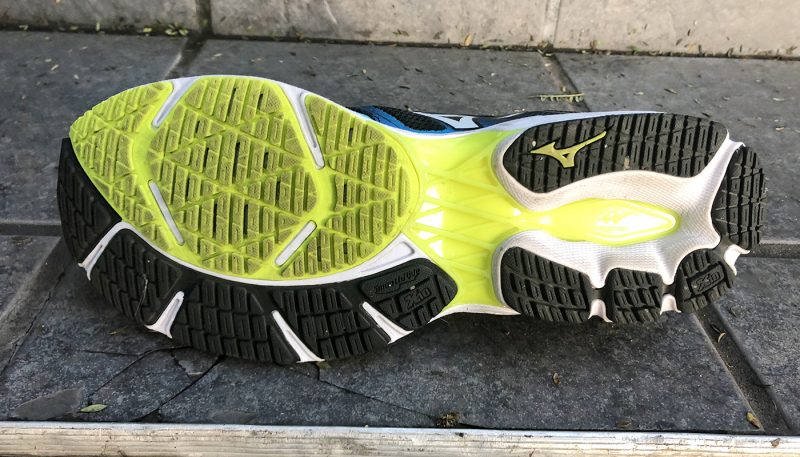 THE VERDICT
For neutral runners looking for a form fitting, lightweight trainer for long miles and some up-tempo work, the Mizuno Wave Shadow 2 is worth a look. Although a stiff heel may push away heel strikers, those who land farther forward will love the smooth, flexible and responsive ride.

The Mizuno Wave Shadow 2 returns with a new upper and the same firmer riding sole. The light daily trainer comes from a long lineage of lightweight trainers in the Mizuno line. The new form-fitting forefoot mesh combined with reinforced material in the heel and midfoot create a better lockdown than the previous version. Testers were mixed on the snug form fitting forefoot as some loved the adaptive fit and others found it narrow. An incredibly smooth riding front of the Mizuno Wave Shadow 2 made this shoe great for long miles and some up-tempo running. The forefoot is flexible and responsive, receiving high praise from testers. Despite the wave plate, the heel continues to be on the firm side, making rearfoot landings harsh. Although landings could be loud from the stiff heel, as long as testers landed up front, the pace was easier to pick up. Despite the lighter weight, testers agreed the Mizuno Wave Shadow 2 makes a better daily trainer than a speed shoe.

The Mizuno Wave Shadow 2 fits true to size with snug fitting mesh in the front. Many testers loved the pliable upper in the forefoot, commenting that it wrapped the foot nicely. Others felt it was a little narrow and took time to break in. Over time it supports the shape of the feet well, adapting to a variety of foot types. In the midfoot, testers loved the new secure mesh, thick tongue, and laces. All worked together to hold the foot securely in the midsection and testers noticed no additional movement. The mesh works especially well with the laces, creating somewhat of a custom fit in the middle. In the heel, there is extra padding around the heel and ankle collar to provide a plush step-in feel. However, testers felt the heel was not as supportive as it could be due to a very low heel counter and many wished for a little more security.

With the exception of some stretching of the forefoot mesh, no break in period is needed for the Mizuno Wave Shadow 2. Testers noted this shoe was ready to go from the first second and hit the ground running. The upper is very breathable with the AIRmesh and INTERCOOL systems working to keep the foot cool and dry. The padded heel collar provides a soft step in and on the run feel. Stiff side panels in the heel also work to hold the ankle in place, however, the lack of a full wrap-around still left testers wishing for a bit more security.

The lack of additional arch support was straining to some testers. Although all commented this went away after the warm-up, one tester noticed some strain on his plantar fascia during the initial miles of runs. The stiff heel makes for harsh landings and can be uncomfortable during warm-ups when runners are just getting moving. The continued issue with the heel cut out picking up debris was irritating to some testers, who frequently had to stop to pull rocks out of the rear portion of their shoes during runs on even light trails. This was made up for by the very comfortable, smooth riding forefoot that left testers gliding along mile after mile.

Testers raved about the springy and responsive forefoot of the Mizuno Wave Shadow 2. The coordinated flex grooves, great traction and responsive cushioning made for a bouncy ride up front. Forefoot and midfoot strikers will enjoy the flexibility and light toe spring that makes transitioning forward easy. The heel with a thick wave plate and additional height is hard and stiff. Landings can be jarring, clunky and loud if at the rearfoot. Testers noticed that the mild heel bevel helped smooth this out a little but felt uncomfortable trying to change the pace in the rear portion of the Mizuno Wave Shadow 2.

Due to the clunky rearfoot, testers reported the Mizuno Wave Shadow 2 felt more like a training shoe than a workout or race shoe. The forefoot flexibility and responsiveness can make for a fast shoe during strides and sprints. The secure mid and forefoot aspects of the upper give the potential for a fast feel. However, any landings that involved the rear portion quickly slowed down the shoe due to the abrupt stiffness and landings. Testers felt the ride was more protective for that reason and relegated this shoe for training miles, base training and easy runs.

From the midfoot forward, the ride quality is high in the Mizuno Wave Shadow 2. A very neutral riding and smooth toe-off make for a great ride for forefoot and midfoot strikers. Testers noted the forefoot ride was not only smooth but was resiliently cushioned no matter how many miles piled on. The ride and cushioning were consistent throughout the life of the Mizuno Wave Shadow 2 up front and as mentioned earlier, require no break in period.

However, the clunky and firm heel make for very loud and sometimes harsh landings in the back. Testers also noticed most of the Mizuno Wave Shadow’s weight is biased to the rear portion of the shoe. Although the sound and balance smooth out somewhat with higher speeds, the ride continued to feel a bit uneven. This is exacerbated when debris becomes lodged in the heel cut out in the sole. Despite this odd feeling, the outsole grips the ground extremely well and provides good traction on a variety of surfaces. Based on what was mentioned previously about the heel, rocky terrain may not be an optimal surface.

Continue Reading
WHERE TO BUY
MSRP
$110.00
BEST DEAL
$82.99
LeftLane Sports
ALSO AVAILABLE AT
Road Runner Sports
$109.95
*Your purchase helps to support the work of Gear Institute.
HOW WE TESTED