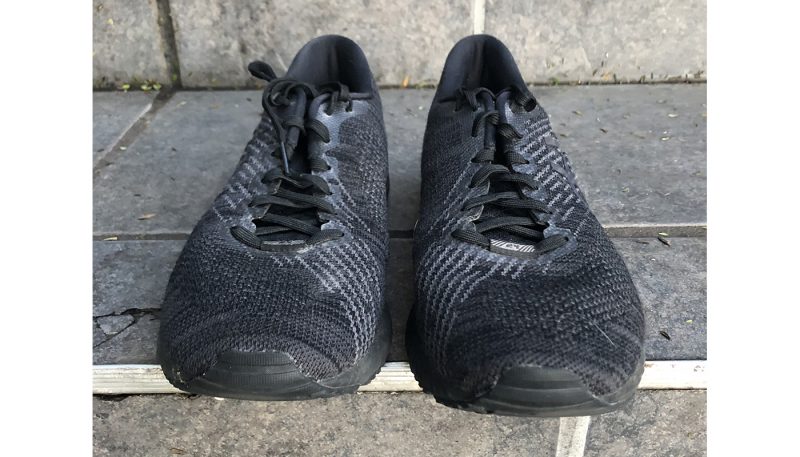 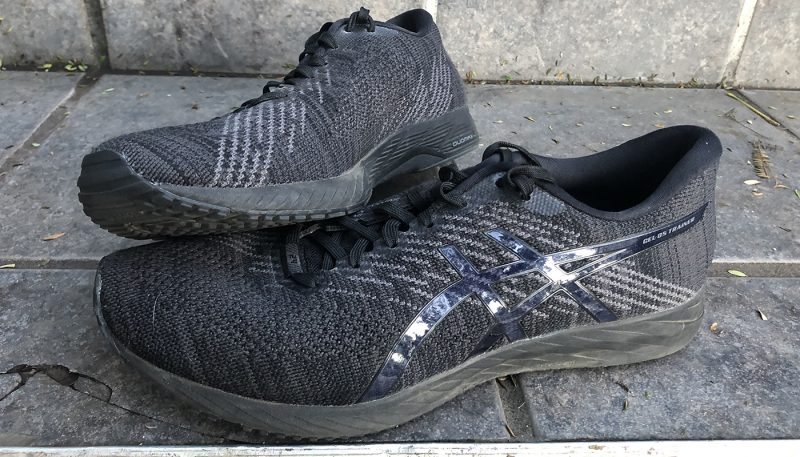 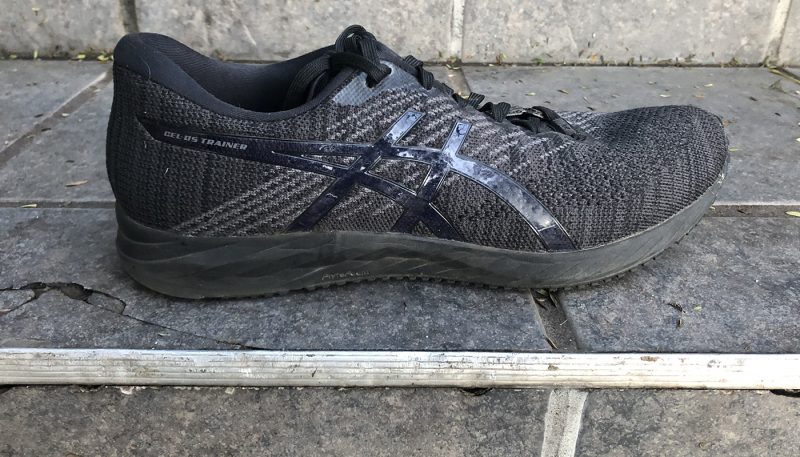 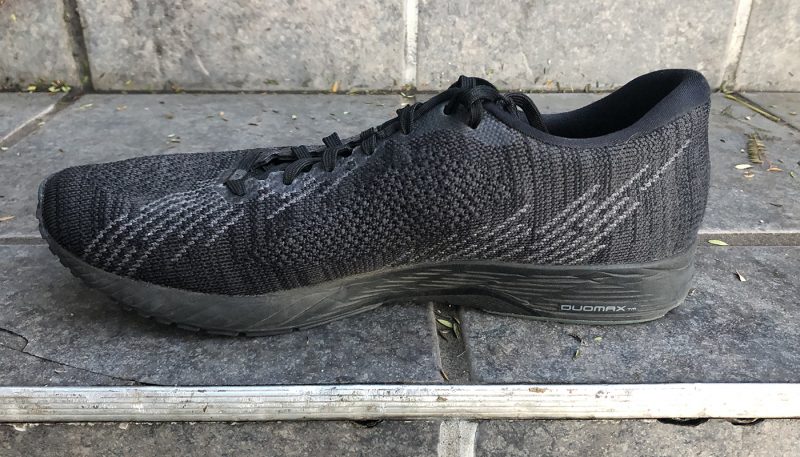 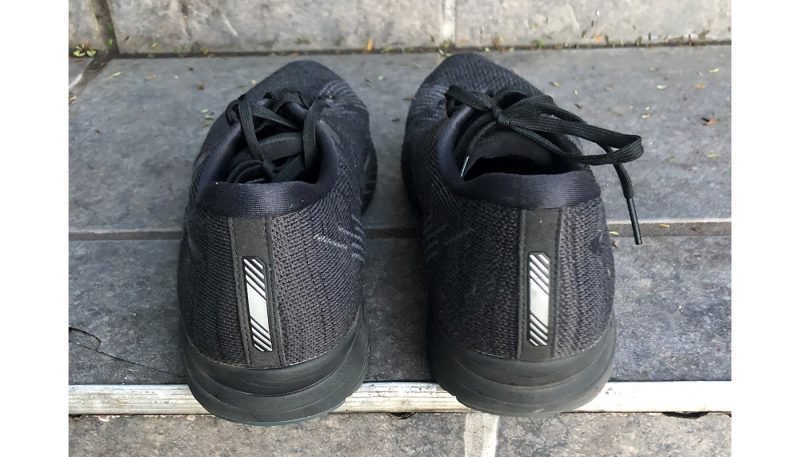 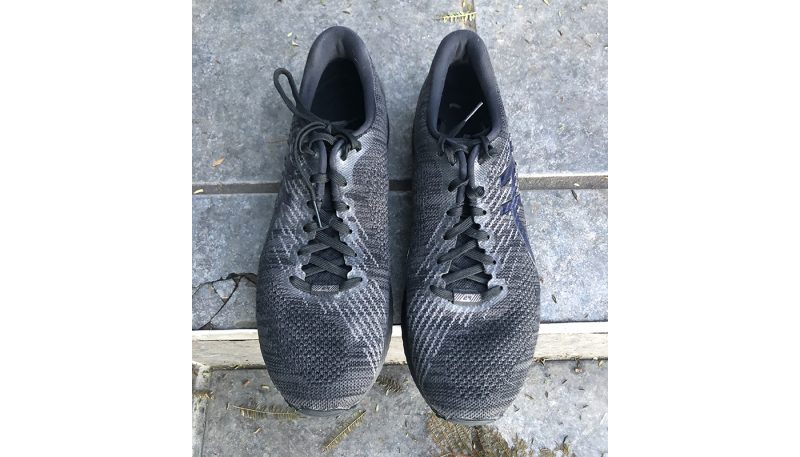 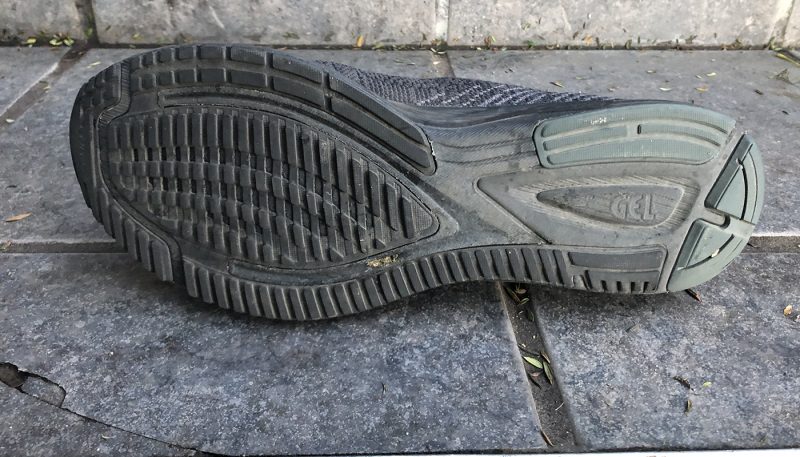 THE VERDICT
The Asics DS Trainer 24 continues to be an up-tempo shoe for those with neutral or mild support needs. The upper has been redesigned to provide an incredibly accommodating and supportive fit. The sole is much firmer than previous versions and works better for speedy days more than recovery days. This is a shoe for those looking for a firmer riding shoe for faster runs and possibly mid-range races.
FULL REVIEW

The 24th iteration of the Asics DS Trainer sees a complete redesign of this classic lightweight stability trainer/racer. Testers were most impressed with the new knit upper, which provided an accommodating fit despite the pointed toe box. Testers found plenty of toe box room compared to previous versions and all reported the heel was held snuggly. Mixed reviews centered around the new midsole and ride. Most testers found the shoe to be a speedy up-tempo shoe while some noted that it was too firm for daily training. All of the wear-testers reported that the Asics DS Trainer 24 had very mild support. Some enjoyed the light guidance provided by the Duomax system while others felt they did not have enough stability provided for longer mileage. Lighter and more efficient runners may find that they can use this as a daily trainer. Testers reported that they generally reached for this shoe for faster days and workouts but went for other shoes when it came to race day.

One of the biggest changes to the Asics DS Trainer 24 is the new Knit Upper. Testers loved the new dialed in fit that was provided. The new upper is especially accommodating in the forefoot. While testers were leery of the pointed toe box shape, all noted that once the shoe was on their feet, the fabric easily adjusted to both wide and narrow forefeet. Sizing wise all reported that the DS Trainer 24 fit very true to size and even adjusted depending on mileage and foot swelling. In addition to being accommodating, testers loved the look. Many reported wearing this shoe for up-tempo runs and casually thanks to the sleek feel and look.

Like the forefoot, testers were impressed with how well the midfoot could be locked down. All reported that the knit upper responded very well to the lacing system, allowing for testers to give themselves just the right amount of security.

The heel fit is dialed in and supportive. Testers supported feeling extremely secure in the Asics DS Trainer 24 as well as comfortable. The heel counter combined with additional the heel collar provided a stable and soft feel. Even testers with sensitive heels reported loving the fit and not having any issues.

Testers were mixed on the comfort level of the Asics DS Trainer 24. All reported that the upper was incredibly comfortable, supportive and a favorite from all the shoes tested. However, the initial step-in feel of the sole took some time to break in. Many testers reported difficulty getting used to the firm ride of the Asics DS Trainer 24 initially for anything but moderate speed runs. Others described the initial feel as hard, especially in the rear part of the midsole.

Testers reported that the firmer ride and lack of additional support made the shoe feel uncomfortable for short and recovery runs. Many wished for more cushioning, particularly under the heel. Due to these factors, testers consistently reach for other shoes for recovery runs or longer miles.

Versatility is a word that matches the Asics DS Trainer 24 well. Testers noted that while the shoe worked better for moderate speed running, the Asics DS Trainer 24 was able to handle a variety of paces and terrain changes.  However, it was not responsive as many would have liked due to being firmer than expected. Testers felt that while the ride was firm, the midsole did not give as much push back as they would have liked. Many noted that unless the speed was very high, the midsole firmness overrode the Propulsion Trussic System. All testers noted that this firmness slowly melted away to a degree as the shoe broke in more, allowing for a little more forgiving ride with time.

Testers agreed that the Asics DS Trainer 24 was on the faster end of the running shoe spectrum. The Propulsion Trussic System extends into the forefoot and responds very well to higher speed running and turnover. Some testers found that the firmer ride worked well for shorter workouts and could generate speed easily in the Asics DS Trainer 24. However over longer distances, many agreed that maintaining the speed was difficult to maintain due to the lack of additional cushioning.

This is the first Asics DS Trainer that changes to an 8mm heel drop. Testers noted that this improved the speedy feel of the shoe and helped many get onto their toes. Testers reported that the midfoot especially felt fast due to the origin of the Propulsion Trussic System as well as the full ground contact allowing for quick transitions.

Many testers noted that landing further back in the shoe was somewhat awkward both due to a lack of support as well as the lack of springiness from the midsole. One tester noted that he felt like he was stomping the ground when landing farther back in the Asics DS Trainer 24. Testers were mixed on the quality of pushing off in the shoe. Many felt like the Propulsion Trussic System worked well for a smooth transition off the toes, while others felt it created a stiff forefoot.

All testers noted that the midfoot was the smoothest part of the ride. The combination of a full ground contact outsole combined with the trussic system provided a great place to transition through as well as land. Testers noted that despite the lack of additional stability from the Duomax system, the midfoot felt stable due to the additional contact area.

No issues with durability were noted by any testers. The Asics DS Trainer 24 maintained a similar feel throughout the life of the shoe.

Continue Reading
WHERE TO BUY
MSRP
$130.00
BEST DEAL
$88.87
Road Runner Sports
*Your purchase helps to support the work of Gear Institute.
HOW WE TESTED