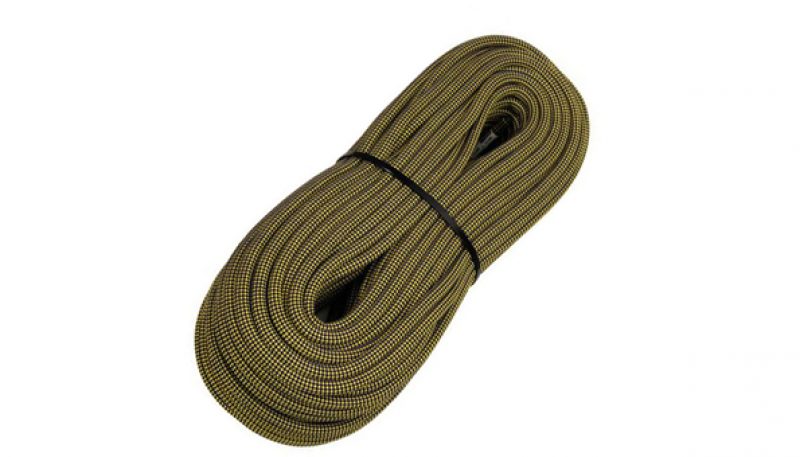 The Metolius Monster is a 9.8mm rope suited for sport and trad climbers looking for a durable, great handling rope. The rope features a highly visible and durable way to find the middle of the rope–dubbed the Monster Marker–which proved to be a popular feature with testers. The highly durable Monster resisted dirt collection even after dozens of pitches over several months of testing.

The Metolius Monster is a 9.8mm rope for sport and trad climbing. Available in 60 or 70 meter lengths with dry and non-dry treatments.

Handling
The Metolius Monster gained great popularity with testers for its handling characteristics. The rope felt compact, with a tight weave that made handling and clipping comfortable. Because of the great durability of the Monster, the rope maintained its compact feel over extended testing. The Monster fed well through belay devices and knotted well. The Monster feels thicker than some of the other 9.8mm ropes tested and initially I didn’t think it would clip and handle as well. After repeated use I found the rope to handle great and came to appreciate the way its handling characteristics over time.

Resistance to Dirt
The Monster resists dirt well despite not having a dry treatment. Through heavy and repeated use in a variety of conditions and settings it proved remarkably resistant to picking up dirt and losing its color.

Durability
The Monster proved to be one of the most durable ropes tested. Over several months of testing that involved dozens of pitches in a variety of areas with abrasive rock, the Monster’s sheath still looks close to new and the rope’s feel and handling has been maintained. The Monster hasn’t gotten soft and the sheath shows a minimal amount of “fluffing”, despite heavy use in areas like Joshua Tree.

Extra Features
Testers appreciated Metolius’ method of marking the middle of the rope, dubbed the Monster Marker. Metolius weaves bright orange nylon fibers through the middle of the rope for a highly visible method of marking the middle. This bright mark was easy to see in low light as well as normal light scenarios. Additionally, the Monster Marker can be felt when the rope passes through your hand. Hence when belaying or lowering someone and I felt that middle mark I knew to be aware.

Weight
At 64 grams per meter, the Monster was one of the heaviest 9.8mm ropes tested. Compared to the lightest ropes in the test, the whole Monster rope was 6 ounces heavier.

Value
The Monster, as tested, retails for $194, a price that is similar to many other 9.8mm ropes on the market. Considering its’ favorable performance and great durability many testers considered it to be a good value even though it lacks some of the extra features or special technology other ropes have.