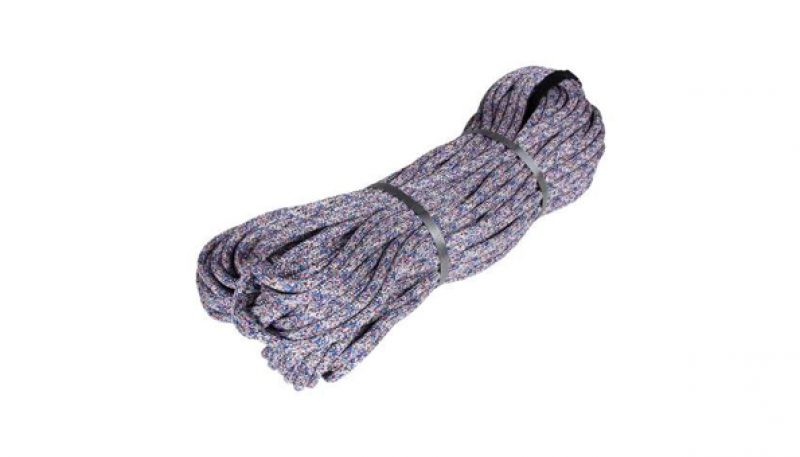 The Mammut Transformer is an incredibly durable and wear resistant rope ideal for rock or alpine climbers who value a rope that can take repeated abuse. The SuperDry coating makes the rope appealing to ice climbers and mountaineers who seek a dry-treated rope at a good value. Sport climbers who appreciate the durability of the Transformer may find the stiff feel and handling less than ideal. Environmentally conscious climbers will like the use of leftover transfer yarns to reduce waste in the manufacturing process.

The Mammut Transformer is a 9.8mm for rock or alpine climbing featuring the Mammut SuperDry coating and a unique design due to the use of leftover transfer yarns.

Handling
The Mammut Transformer wasn’t the most popular rope for handling among our testers. The first thing testers noticed about the Transformer was its stiffness of the rope, which adversely affected how it fed through belay devices and handled during knot tying. On the other hand, the Transformer held knots securely and handled well when clipping into gear.

Resistance to Dirt
The water resistant treatment on the Transformer helped the rope resist dirt as well. After repeated and heavy use in a wide variety of conditions the Transformer proved to have great resistance to dirt. With time, the rope did start to pick up some dirt and it made the middle mark hard to identify but the dark color of the rope fibers also helped mask the dirt.

Durability
Durability was one of the most noticeable and appealing characteristics of the Mammut Transformer. Despite repeated heavy use in a variety of situations, the sheath resisted fraying. I put it through several days of heavy use in the notoriously sharp granite of Joshua Tree during an American Mountain Guides Association (AMGA) guides course and the sheath still looked great, despite the repeated abuse from lowers over edges, hauling, and other beyond-normal conditions. I also used this rope in several Utah slot canyons and the Transformer still held up despite being drug through the sand, pulled over edges, and other abuse.

Extra Features
The Mammut Transformer has a number of extra features that increase its’ attractiveness. The rope ends have a unique tag that is adhered to the rope in some fashion that has proven remarkably durable. Traditional rope end tags are typically some form of heat shrink tubing and often fall off with use, sometimes in a few pitches. The rope end tags on the Transformer look like a sticker adhered to the rope and they are still hanging on after months of climbing.

Additionally, the Transformer has some appeal for the environmentally conscious because of the transfer yarns used to construct the rope. Transfer yarns are high-quality left yarns that would normally be thrown away. Hence, the Transformer saves resources and it also means every rope has a unique design, something that many testers found appealing. The rope I tested was made of a lot of dark and black colored yarns, making the rope’s black middle mark hard to see. The middle mark was initially reasonably easy to find but after a couple dozen pitches of use the mark became almost impossible to spot.

Weight
Weighing in at 64 grams per meter, the Transformer was one of the heaviest ropes tested in the 9.8mm category. The 64 g/m means you’re going to lug around an extra 6 ounces of weight compared to the lightest 9.8 ropes tested.

Value
At $200, the Transformer is comparable in price to many of the ropes tested. Climbers looking for a rope with great durability will consider the Transformer to be a great value. Climbers that don’t like the stiffness in the handling and feel of the Transformer will not share that sentiment.