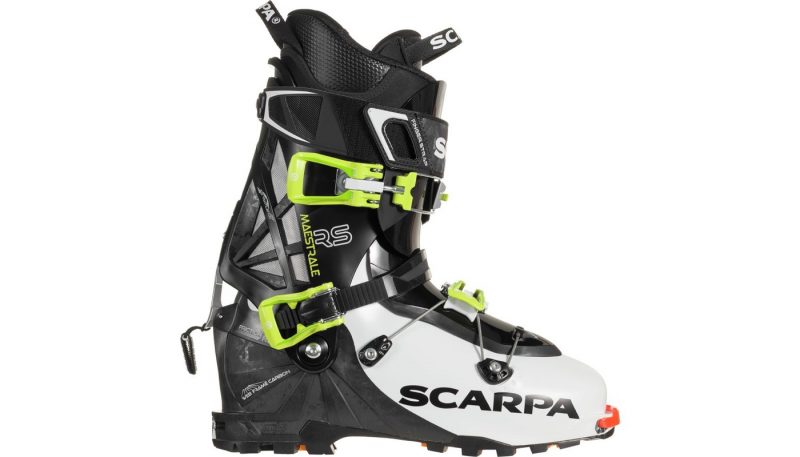 THE VERDICT
This latest version of Scarpa’s Maestrale RS is a worthy upgrade. Not only are they 5oz lighter, but they feature an improved external walk mechanism, 60 degrees of cuff rotation, and a solid 130 flex rating. To say that these boots tour well is an understatement, but the real surprise is that they now ski inbounds better than any other AT boot we’ve tested. Lightweight comfort in a hard charging AT boot is now a reality.
FULL REVIEW

The Scarpa Maestrale is currently the best selling alpine touring (AT) boot in the world, and it’s just gotten better. For fall 2017, Scarpa has released new versions called the Maestrale RS (the stiffer version) with the women’s versions dubbed the Gea RS. In this review we’ll be focussing on the Maestrale RS, while also touching on the differences between it and the regular Maestrale.

You might say the new version of the Maestrale RS is more of an evolution than a revolution; While there are some significant improvements, Scarpa was sure not to fix anything that wasn’t broken, nor reinvent the wheel.

The new Maestrale RS is 5 ounces (or 142 grams) lighter; a weight savings achieved through omitting the extra buckle on the forefoot and using lighter plastics throughout the boot.

The walk mechanism on the back of the boot now uses an external design that allows for a full 60 degrees of cuff rotation when in the unlocked position, compared to the 37 degrees found on the previous version. This incredible range of motion is available in walk mode without having to give up an ounce of stiffness in ski mode. Scarpa rates this new RS version as having a 130 flex, whereas the previous version was only 120.

To say that the Scarpa Maestrale RS boots are comfortable is an understatement. I didn’t experience any hot spots or wear points on my feet after testing the RS’s at the resort, or on my all-day ski tour. They provided a very secure foothold with ample toe box room and a defined heel pocket in the rear. The 101 millimeter last is wide enough for average to wider than normal feet (such as mine) but I found that there’s no foot movement when the boots are buckled up tight — thanks to the position of the middle buckle over the forefoot. While most of the RS’s comfort is due to the fully heat moldable Intuition liner, the overall easy in/out and weight of the boots help as well.

At just over 6 pounds the Maestrale RS boots aren’t the lightest on the market. But given the performance they provide this weight is fairly impressive. Their Grilamid shell integrates long-strand carbon to save on weight and improve performance and stiffness. The Wave Closure System on the forefoot eliminates the need for an additional buckle; This single buckle/wire configuration securely fits the boot to your forefoot while also saving some precious ounces.

A lightweight AT boot with a huge cuff rotation typically doesn’t ski as well as some of its heavier competitors, but this isn’t the case with the Maestrale RS. Because its three-piece shell uses a carbon-fiber/Grilamid nylon hybrid material underfoot, it provides torsional rigidity and impressive power transfer to your skis. The Pebax tongue has a smooth forward flex which helps give the Maestrale RS its 130-flex rating (the regular Maestrale is rated at 110). These are impressive numbers for an AT boot that’s this light, and you’ll be equally impressed when you put this boot through the paces on steep terrain or in variable snow conditions.

One of the most impressive upgrades to this season’s Maestrale RS boots is the increased friction-free cuff rotation. The previous versions had only 37-degree range of motion, which has been bumped way up to a full 60 degrees. This allows for incredible forward/backward mobility on the skin track without even having to unbuckle your boots. The lightweight Speedlock Plus aluminum ski/walk mechanism is an external design that’s rock solid and simple to use. No more internal components to freeze up or break. On the bottom of your Maestrales you’ll find Vibram soles which ensure reliable traction on mountain ridges and cafeteria floors alike.

The Maestrale RS ski tours well and can also ski the resort with ease; This great combination garners high praise from this reviewer, as these two attributes are seldom found in a single AT boot. The Maestrale and Maestrale RS qualify as a true quiver of one ski boot. If you’re looking for a softer boot, then the Maestrale is for you (with its 110-flex rating compared to the 130 rating of the RS version). Both versions still have the same 60-degree range of motion, but the RS model weighs a mere 0.3 ounces less than the standard Maestrale. On the woman’s side, the Scarpa Gea boots are very similar to the men’s Maestrale, the only real difference being a wider opening at the top of the boot to accommodate the lower calf muscle of a woman’s leg.