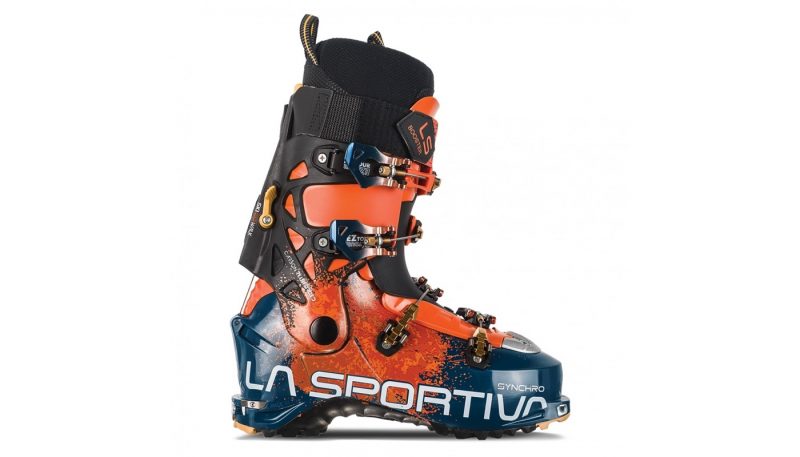 THE VERDICT
La Sportiva has succeeded in designing and manufacturing a stiffer, all-mountain focussed version of their popular Spectre 2.0 AT boot. With minimal added weight and a 125-flex rating, the Synchros are built for any terrain and condition, inbounds or out. The only sacrifice is a reduced cuff rotation (when compared to the Spectre 2.0’s), but thanks to the two-piece tongue this doesn’t sacrifice performance.
FULL REVIEW

The comparison of the Synchro AT boot with that of the Spectre 2.0 is a natural one, given that the Spectres have been La Sportiva’s flagship consumer-based AT boot for the last five years. The Spectres were recently improved with a re-design to increase stiffness, and are still aimed squarely at the light and fast AT crowd. Evidently, La Sportiva saw an obvious un-answered niche in their line; namely an all-mountain AT boot that rivals options like the Scarpa Maestrale RS, the Salomon MTN Explore, and the Technica Zero G. The origins of the Synchro lay heavily indebted to the battle scars that the Spectre and Spectre 2.0 have acquired over their combined histories. La Sportiva learned how to improve on an already efficient design while making it stiffer, stronger, and more performance oriented.

Creating an AT boot that increased in weight by only 220 grams (per pair), and jumped from a 115-flex rating to that of 125, while sacrificing a mere 10 degrees of cuff rotation is a work of pure genius. While both Dalbello and Atomic tried to do the same with their Lupo AX 125 C and Hawx UL XTD 130 boots, they are overshadowed by the Synchro (evident in the superior ratings the Synchro Boots received). While these other boots are still worth considering, the Synchro stands head and shoulders above each of them, while also coming in at more than a C note cheaper.

The Synchros are in that elusive category that combines AT with all-mountain to create a single ski boot versatile enough for both in- and out-of-bounds skiing.

While I prefer a traditional liner and not a wrap around design like the one La Sportiva decided to use in the Synchros, they’re still quite comfortable. What will challenge most people however, is the steep learning curve that the Pegasus buckles present. This is especially true when they are under load (good luck with those).

While it’s hard to argue with the Synchro’s Vibram soles and multi-compatible tech fittings, I would be remiss if I didn’t mention the cosmetic aspect: While the overall color scheme is fine, it’s the very Euro silk screen graphics that leave me asking, “why?” These however, are all minor points on an otherwise capable and versatile AT boot.

Like the Spectre 2.0 boots, the Synchros comfortably accommodate normal to wider feet thanks to their 102.5 millimeter last. The first time you slide them on you’ll notice a very roomy toe box and slightly more interior volume than the Spectre 2.0s. Most of this can be attributed to the rigidity and compact nature of the EZ Wrap Liners. While fitting the Synchros at my local ski shop, I noticed they required a more aggressive lift under my custom insoles to take up the additional volume. After adding additional lift, I found the boots comfortable, but noticed the EZ Wrap Liners were not as soft and supple as the Spectre 2.0’s liners, and were also lacking the traditional liner tongue. The liners in the Synchro boots have a wrap around design which does not have a built-in flex zone to accommodate for the 50 degree cuff rotation in walk mode; They felt a little stiff, and not as flexible as I would have liked.

At just 1,550 grams per boot, the Synchros qualify as a lightweight alpine touring boot, but they certainly aren’t going to break any weight records, nor should they. These boots were designed for aggressive all-mountain skiing rather than light and fast sorties into the backcountry. Their Grilamid shell provides impressive rigidity given its weight, and you will hardly notice the difference if you are use to the Spectre 2.0 boots. The only obvious change is to the buckle system: The Synchro’s Pegasus Plus Buckles look like miniature dinosaur spines and further help reduce weight, but some might find them challenging to use.

The power-to-weight ratio of the Synchros is truly impressive, and most of the credit goes to the Grilamid shell and Carbon Reinforced Grilamid vertebra. This lightweight material increases stiffness without adding much additional weight. It’s not often you see a boot in the 3 kilogram range that provides a 125-flex rating. In fact, the Synchro is the stiffest boot La Sportiva has ever made. This boot can drive larger skis down more challenging terrain (in bounds or out) while not slowing you down on the skin track.

With a boot this stiff, one might assume the cuff rotation would be severely restricted. While this may be true in a traditional overlap shell design, it’s not so for the Synchro. The secret to its 50 degree range of motion is an innovative hinged ‘Double Power Tongue’ which increases the boot’s mobility and flex. This two-piece tongue design is rigid when in ski mode and un-hinges to increase mobility when in walk mode. While not the 60 degrees of cuff rotation that the Spectre 2.0 and Maestrale RSs provide, it’s still admirable considering the Synchro’s 125-flex rating and overall beefy feel.

When you combine the Synchro’s 125-flex rating with its 50 degree cuff rotation and weight of 3.1 kilograms, you begin to understand why this boot is part alpine touring and part all-mountain pow slayer. This boot has the right combination of figures to do everything well. If you are not concerned with having the lightest or stiffest AT boot on the market, this is a very capable ski boot for out of bounds and resort skiing alike.