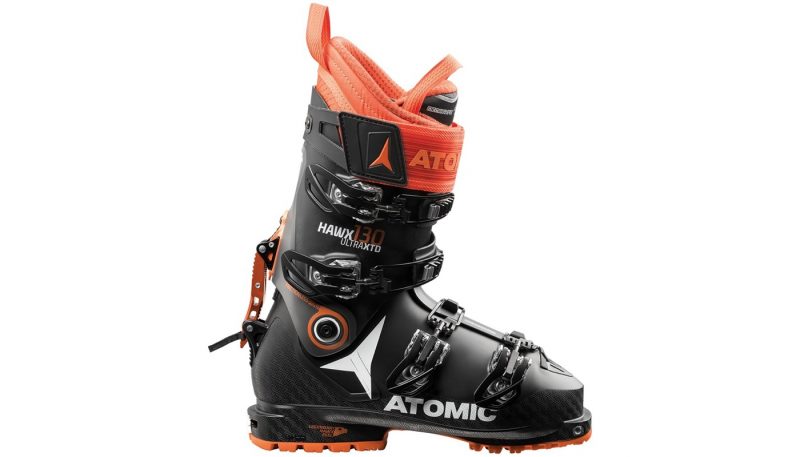 THE VERDICT
The Atomic Hawx UL XTD 130 boots are neither the lightest nor most comfortable ski touring boot out there, but they are a capable hybrid resort/touring boot for those who value performance. With a 130-flex rating, their 6.26 pound weight is impressive, especially for a traditional overlap construction boot. The Free/Lock 2.0 mechanism provides a quick and easy way to switch from ski to walk mode. With 54 degrees of cuff rotation, skinning is fairly fluid, but you will have to unbuckle the boot first. The buckles themselves are flimsy and do not remain fixed out of the way when you are putting on or taking off the boots. This, along with the Hawx UL XTD’s limited comfort make it feel more like an alpine ski boot that has been altered to tour, rather than a true AT ski boot like the Scarpa Maestrale’s.
FULL REVIEW

Atomic is the number two ski boot manufacturer in the world, so they know a thing or two about manufacturing high-performance alpine ski boots. With the success of their recently released Atomic Backland AT boots, Atomic decided to combine some of the Backland’s most loved AT features with those of their equally revered Hawx Ultra freeride ski boots. The Hawx Ultra are an all-mountain ski boot, whereas the Backland is a feather-weight AT boot. Combine the two and you have what Atomic calls their “crossover” ski boot.

Most of a ski boots’ comfort comes from the liners, and Atomic’s use of the Memory Fit 3-D Platinum/Gold liners in the Hawx UL XTD 130 is no exception. While not overly plush, these liners provide plenty of cushy comfort without going overboard or overweight. Once they’re cooked up and custom molded, these liners rival the best in any AT boot. You’ll need to replace the stock footbeds with a custom pair if you have odd shaped feet or simply want a better fit; This really goes for any ski boot, as the stock footbeds provide little to no arch support, and do not adequately fill the added volume that I found in the Hawx UL XTD 130 Boots. With a four-buckle overlap construction, these boots are not easy to get in nor out of, especially on cold, early starts. This design also makes the boots feel more akin to a pair of stiffer alpine ski boots rather than the plush comfort you’d find in a true AT boot.

At 6.26 pounds, the Hawx UL XTD 130’s are a far cry from Atomic’s über light Backland Carbons, which weigh a paltry 5.1 pounds. However, they are still under the average weight of most AT boots and provide considerably more power and stiffness. Atomic has used Grilamid plastic for the cuff and shell of the Hawx UL XTD 130’s (Grilamid being the lightest and strongest plastic used in ski boot construction today). This is the main reason for their relatively light weight, coupled with the boot’s light and comfy Memory Fit 3-D Platinum/Gold liners.

Given that the bulk of the Hawx UL XTD 130 chassis is based upon Atomic’s Hawx Ultra freeride ski boot, you’d be justified in expecting quite a bit of power from this ski boot. Its overlap design is more an alpine boot design than AT, and the main reason that the Hawx UL XTD 130 function more like an alpine boot. Its 130-flex also adds to the equation, making this a hard charging, stiff boot that can easily ski the resort on any kind of terrain and in any snow conditions. It easily drives fat 115 cm+ skis and earns its crossover moniker, as long as you get the fit right.

The Free/lock 2.0 mechanism on the back of the Atomic Hawx UL XTD 130 is taken straight from the Atomic Backland boot. It makes switching between ski and walk modes super simple and secure. Once you flip the mechanism to walk mode you still need to loosen the power strap and a few of the boot buckles to get the full benefit of the 54 degrees cuff rotation. Only then can you appreciate the complete range of motion in walk mode, because the overlap construction needs room to flex. Although the boot buckles are straight off an alpine boot and are clunky and basic in design, they do have integrated buckle hangers which provide the ability to extend the flex without having to fully unbuckle the Hawk UL XTD 130.

The Atomic Hawx UL XTD 130’s are more than capable when skiing the resort given their 130-flex rating and their overlap construction. They also tour well thanks to the ample cuff rotation and lightweight design. You can say that they kind of do it all. However, I found they didn’t ski tour particularly well since they feel like an alpine boot that has been retrofitted to tour. The overlap construction screams alpine boot while the only indication of a backcountry boot is the ski/walk mechanism on the rear of the boots (which sort of feels like it was ‘Frankensteined’ on). The buckles add to this feeling of unease and reiterate that you are touring in an alpine boot, not unlike the early days of the Salomon Quest or K2 Pinnacle boots.