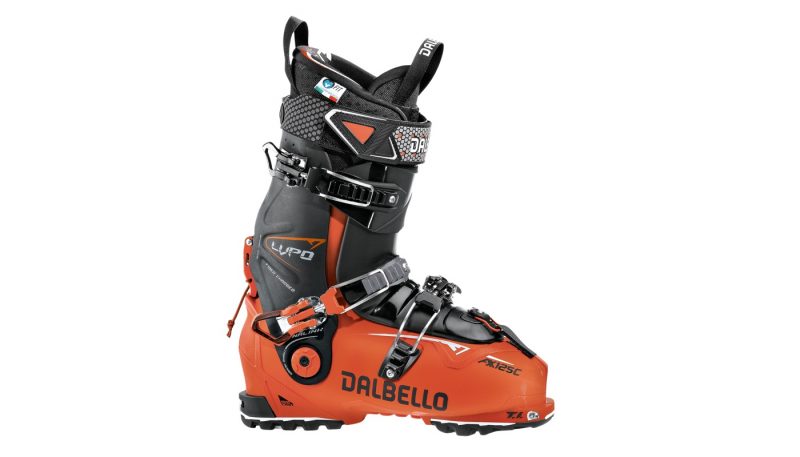 THE VERDICT
Dalbello’s new Lupo AX 125 C Boots are designed with equal parts alpine skiing and alpine touring in mind. Classified as a “Freeride Touring Boot,” the Lupo AX 125 C’s combine the comfort and range of motion of a touring boot with the performance and stiffness of a downhill boot. These are the lightest ski boots currently in Dalbello’s lineup, relative to their high flex rating which comes in at 125.
FULL REVIEW

New for fall 2017, Dalbello has overhauled the Lupo lineup with six new boots to choose from. These include the Lupo Factory (previously called the Lupo Ti), Lupo 130 C, Lupo AX 125 C, Lupo ZX 120, Lupo AX 115, and for the ladies, the Lupo AX 110W. Each of the numbers within the respective names refers to their flex rating while the ‘AX’ suffix refers to the wider version of the standard Lupo.

The IF Air Plus liners on the inside, and Dalbello’s three-piece Cabrio design shell on the outside ensure that this three buckle boot fits incredibly well. 67 degrees of cuff rotation in walk mode makes climbing easy and natural while a weight of 7.27 pounds won’t slow you down. The overall performance is impressive given this boot’s weight. However, this is not a true ‘lightweight’ ski touring boot; It’s more geared towards day tours, hard charging slack country lines and skiers wanting more downhill than uphill performance.

The secret to a secure foothold (and thus a comfortable ski boot) is the number of buckles. While the Lupo AX 125 C’s have only three buckles and one power strap, they are ideally situated; The middle buckle over the forefoot provides maximum foothold by pulling your foot back and into the boots’ heel pocket. Although the included footbeds are not very substantial (as with most stock footbeds), once I replaced these with my custom molded insoles I found that most of the additional volume within the shell was corrected. Heat molding the IF Air Plus liners was also useful in forming to my foot, taking up additional volume, and providing more where required. In walk mode, comfort was not compromised, however, you do have to unbuckle all buckles and the power strap to take advantage of the boot’s full 67 degree range of motion. This can cause some foot slip within the liner, so be sure to perfect the buckling to prevent blisters.

Most AT ski boots weigh in the 5.5- to 7-pound range, so Dalbello’s new Lupo AX 125 C Boots would be considered on the higher end of the scale, but still in that sweet spot. While skinning up, you can save about three quarters of a pound by removing the boots’ tongues. This also provides you with far more cuff rotation so it’s a win/win. However, you are only saving the weight off your feet, as the tongues must be stowed in your pack and carried with you up the mountain. The Lupo AX 125 C’s Grilamid/Fiber three-piece shell is where most of the weight savings can be found, complimented by the fact that the boots have only three buckles instead of four.

With a flex rating of 125 and Dalbello’s tried-and-true three-piece cabrio design (shell, tongue, and cuff) it’s no wonder the Lupo AX 125 C’s are a high-performance ski boot. Most of their stiffness is derived from the tongue and its ribbed design which is super stiff while still striving to provide a progressive flex. The tongue can be removed while skinning so you have plenty of range of motion in walk mode. In ski mode, the Lupo AX 125 C’s feel like a true alpine ski boot with the ability to tackle any terrain no matter how demanding. Driving a ski in the plus 100 millimeter range is also not a problem, as this boot has the mass and stiffness to ensure power transmission from skier to ski is more than adequate.

The Lupo AX 125 C Boot’s full 67 degrees range of motion can only be achieved with the removal of the tongues: You must completely unbuckle the boots, flip a lever located on the lower portions of the tongues, then pull them up and out. Flipping the ski/walk mechanism located on the back of the boots allows you to enjoy the 40 degree range of motion to the front, and 27 degrees to the back. With the tongues in the boots their maximum cuff rotation is reduced to a fraction of this as most of the boot’s stiffness is derived from the tongues’ ridged design. You will also need to have the power strap and buckles loosened to get the full benefit of the boots’ cuff rotation.

The need to remove the tongue and loosen the Lupo AX 125 C’s buckles makes the true walkability of these boots a bit of work. While some will say it’s worth it, I would have to argue that it’s just too much when compared to other AT boots which employ a simpler design to achieve the same result.

When you combine a 125-flex with 67 degrees of cuff rotation in a boot which weighs just over 7 pounds, you’ve created an AT boot that’s as comfortable skiing inbounds as out. The Lupo AX 125 C is equal parts AT and alpine ski boot. While not a true lightweight, the Lupo AX 125 C’s performance more than makes up for their slight weight penalty. If not for their huge range of motion in walk mode, I’d have said that these boots are a better choice for resort skiing than touring. I’d also have to agree with Dalbello’s classification of the Lupo AX 125 C’s as a true Freeride Touring boot — able to take on steep, committed lines both inbounds and out.